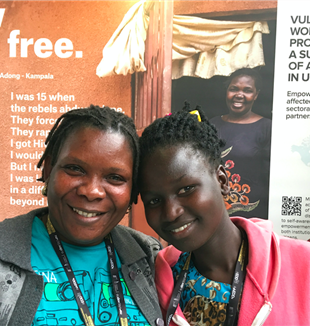 "What a powerful energy.” This was perhaps the comment most frequently expressed by those who met 45-year-old Teddy Bongomin and 20-year-old Sharon Akidi in Brussels on June 5 and 6, when the two women from the Meeting Point International (MPI) of Kampala were guests at the European Commission’s European Development Days, the most important European forum on development cooperation, this year dedicated to the theme of women’s empowerment.

AVSI and MPI together won selection for a stand where they could tell participants (sector experts, analysts, think tank representatives, functionaries, and heads of state, including princesses and queens) what types of development assistance, especially what efforts for women’s empowerment, they think are the most worthwhile for future investments.

The proposal they made at the European Development Days stood out amidst other initiatives. The AVSI stand featured the experience of the MPI, a Ugandan reality begun by Rose Busingye. The two MPI women were invited to talk about the multisectoral program that, with AVSI support, has been proposed to thousands of women in Uganda, enabling them to move from being vulnerable, a term used in the sphere of development cooperation, to being protagonists of their own lives. Mere words fail to describe the attraction of others to these two women from the Kireka slum (it was Sharon’s first time on an airplane). The faces of those listening to them or standing alongside them when they were making a colored necklace expressed wonder, uneasiness, and perhaps also envy at their freedom. The stand included a workshop with everything needed so visitors who so desired could learn to make their own rolled paper bead necklaces. These objects were doubly appreciated because they are also environmentally sustainable, and they sold like hot cakes.

During those days, Teddy and Sharon made themselves available to anyone who wanted to interview them. They answered all kinds of questions, always telling their personal story from the beginning, with patience, as if each time was the first, with special attention to whoever was in front of them, be it a high functionary or a volunteer serving at the event. As they dialogued so disarmingly, without realizing it, they were creating networks of international relationships and transmitting a precise idea of what it means to empower women.

They started by describing the situation of fragility in which they had found themselves. For Teddy, it involved sickness, beatings from her husband, abandonment by her relatives, and the loss of her house and everything she owned. For Sharon, it meant having to flee her village when she was a little girl because of war, then a life as a displaced person, without food, health care, or clothing. Then both of them encountered people who accompanied them on a change of life involving better medical care, education, savings groups, and at the launch of entrepreneurial activities. At the center of their testimony, there was always the same foundation: their clear communication that what truly liberated them was consciousness of themselves, the recognition of their own value. “Now I am free” they repeated, a freedom generated by the discovery of being loved and of their personal value, which they have by the very fact of their breathing, because of the pure, essential fact that they are in the world. There may be problems–money is short, it is difficult to make it to the end of the month, Teddy’s daughter has to resist the daily pressure of those who say it is easy for a woman to make money, because all she has to do is sell herself. But none of these problems move them an inch from their certainty. 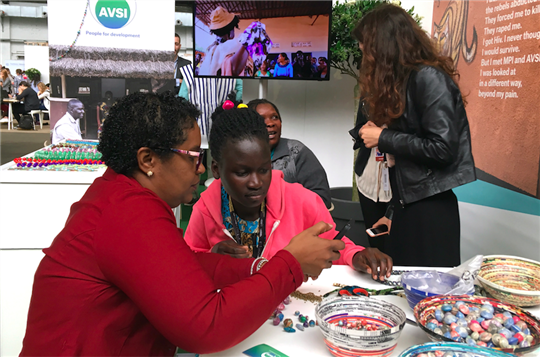 “If I discover who I am and I stand firm in my dignity [nobody at the Brussels event could pronounce that word with Teddy’s rock-solid tone, devoid of any rhetorical flourish], the poverty or the violence I may suffer do not define me. I am of unique value and thus I can stand in front of everything. The problems don’t disappear, but they take on real dimensions that can be faced.”

People were curious about these two dragonflies from Kampala, and this curiosity was mutual. Nothing that moved in the expo center near the “Tour & Taxis” area slipped under their radar. One stand nearby was run by an association for the defense of LGBT rights. It was staffed by a solitary young man in his thirties who did not receive many visits. Teddy kept stealing glances at him, until she could not hold out any longer, and one evening went over to talk to him, with Sharon in tow. She stayed a long time with him as if she did not want to let him go. “I wanted to understand what he was looking for, what he was like. For us Africans, this theme is very far off. I listened to him and tried to understand his need. I didn’t say much to him, except that he needed to know that he was of worth.”

After 48 hours in the big expo center for development cooperation, walking the corridors with Sharon meant stopping every two steps: she greeted everyone and exchanged something with every person as if she were the lady of the house, in her dress of Ugandan colors and her tennis shoes. The stand was designed to show a method of development cooperation that, respecting all the rules imposed by the EU, one of the biggest donors in the world, also reaches the real needs of people, and starts from those needs to kindle a new beginning, to trigger a process that enables each person in every context to take back her life and engage it fully in her community. Teddy and Sharon transmitted this by osmosis, that it is possible to overcome the bureaucratic filters and pro formas that often engulf the world in which development cooperation operates. It is not difficult to imagine that more than one person came away sharing their way of looking at reality.