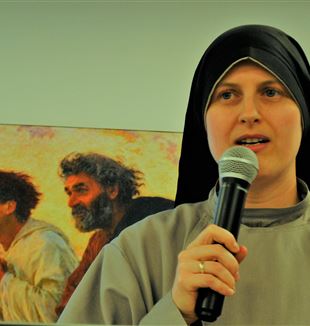 “Our neighbors show their poverty on the outside, but I hide my poverty on the inside.” Sr. Maria Theresa of the Franciscan Sisters of the Renewal spent her early college years devising ways to eliminate the suffering of people she deemed “less fortunate” than herself. But after spending time with an impoverished community in Honduras, she soon began to see her own impoverishment.

After finishing college, she entered the CFR convent in Spanish Harlem where she and the other sisters have a soup kitchen for their neighbors. She attributes her growth in intimacy with Christ to her friendships with the poor who come to the convent each week. “I need the poor because they teach me to depend. In this sense, we are the same. We all need God. I need Him so much that my whole being is crying out that He come to save me.”

At the Crossroads event “Serving without Saving,” which took place in New York City on May 24, Sister recounted several stories about her neighbors, each of the revealing some new, hidden dimension of her heart’s thirst to be loved infinitely by Christ. The common thread running through each of these stories about her neighbors is the simple and uncomplicated way they express their need to be loved.

She told the audience about her friend Debbie, whose mental disability can be taxing on the sisters and guests at the soup kitchen. One day, Sister saw Debbie at the door. Bracing herself, she said a prayer for strength, as she never knew what to expect next from her. But to her surprise, Debbie, in a more lucid and tranquil state than usual, asked, “Sister, do you think I’m beautiful?” 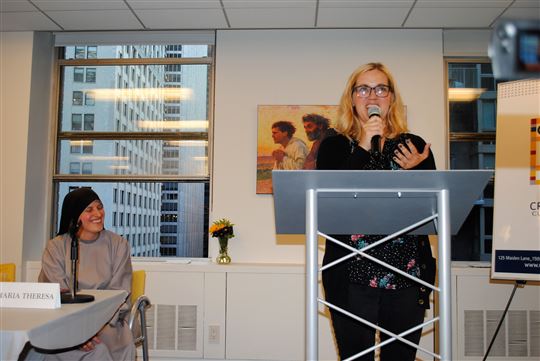 Disarmed, sister thought to herself, “How many times in my life have I wanted to ask this question? Don’t we all want to know that we are beautiful?” As universal as this desire may be, why is it so difficult for us to ask this question with simplicity? Think of all the covert and complicated ways that we express this desire, but never really getting to the question which lies at the root of it. “Debbie and I are the same.” These friendships with the poor are what allow her to see herself for who she really is as if each face she encounters at the door is a mirror that reflects her own need.

Though the second speaker, Danielle (DL) Mayfield, came from a different background than Sister Maria Theresa and is living a different way of life on the other side of the country, her experience working with the poor has also enabled her to uncover a deeper awareness of her own humanity.

Danielle, who grew up in an Evangelical Christian family, wanted to be a missionary from a young age. Her desire to serve God and others led her to study at a Bible college, where she majored in Intercultural (missionary) Studies. Her zeal for spreading the Gospel gave way to a vision of converting sinners and eradicating the many forms of suffering that plagued the Portland area.

Her first experience doing missionary work was with a Somali Bantu refugee community, the majority of whom did not speak English, were nonliterate, and Muslim. She began her mission by trying to teach the community members English so that they could have Bible studies together. But it wasn’t until long that she realized that her new friends had little interest in learning English, nor in leaving behind their Muslim faith. Their native language and religion were the last vestiges of their life back home, and some peppy, young, white missionary--no matter how good her intentions were--was not going to convince them to give that up.

What she soon began to realize is that these people did not need her to “save” them, whether on a spiritual or socioeconomic level. Instead, she found that they needed the same thing that she needed: a sense of “neighborliness” and a loving community.

She realized that true missionary work was actually the reverse of what she always had thought it to be. Instead of her bringing Christ to the poor and “unsaved,” it was them that opened her up to discovering His presence.

“What our society needs is not solutions that are going to save us all, but a radical sense of neighborliness. Before we come up with ways to fix other people’s problems, do we even know who are neighbors are?” 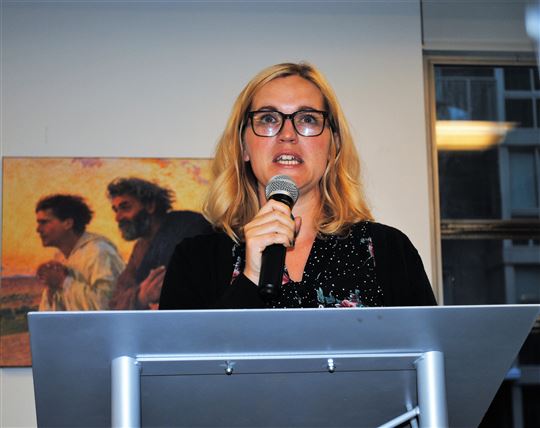 Danielle, who is now married with two kids, lives in the same apartment complex as her Somali Bantu friends. Sister Maria Theresa continues to live in the convent with the other Franciscan sisters. Though their contexts and traditions may differ, what united these women is their desire to face the question of poverty with a profound sense of realism and sincerity. They allowed this question to penetrate even their own lives, to the point of seeking to understand their own inner poverty. And it was precisely this radical openness and curiosity that allowed them to experience unity with their neighbors.

I left the presentation thinking about the many debates surrounding concerns for social justice, and the general political unrest and disunity in American society. The many stories that these women told about their relationships with the poor reminded me of the words of the Peruvian priest, Gustavo Gutierrez: “So, you say you love the poor? Name them.” I think this something we should all take to heart and put into action, beginning in our own homes, workplaces and the streets of our cities.