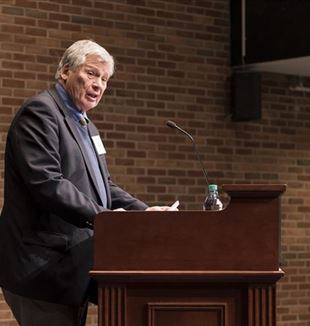 The first thing that strikes you about Paul Mariani is his voice: a warm, deep timbre, amplified by a solemn power that seems to come from remote, other-worldly places. It is an appropriate gift for a poet, one who moves in a realm where words and music embrace each other. When he recited Psalm 63, those gathered in the meadow fell silent. There was only the "exhilarating babble of the children," as he called it, not so much a distraction as an accompaniment: "O God, you are my God, it is you I seek! For you my body yearns; for you my soul thirsts, in a land parched, lifeless, and without water."

This yearning, this innate thirst for a "You," was the point of departure for Mariani's talk, which was a magnificent synthesis of the human experience present in the verses of the American poets he loves. Mariani is a critic, poet, biographer, and professor of American Literature. Before retiring, he spent fifteen years teaching at Boston College, where he was best known to critics and the general public for his biographies of American poets of the 19th and 20th centuries, each meticulously documented, expert works, thrumming with life, the fruit of an intensity of life shared with authors he never met.

During those days in the Catskill Mountains, Mariani spoke of Hart Crane, William Carlos Williams, Robert Lowell and John Berryman. In fact, after listening to him for only a short while, it no longer "seems." They are his friends. He has spent close to fifty years "in the company" of Wallace Stevens, the last of the poets about whom he wrote extensively. In those years he spent many of his days immersed in the smallest details of Stevens's language, in the variations of grammar, in the images, in the mysterious inflections that only a trained ear and an attuned heart can perceive. It is there that Mariani first found proof for the poet's conversion to Catholicism. There are no "papers" that prove it, he said, laughing, but his conversion is there in the eyes of those who have had the patience not only to read the poet's words, but to establish a relationship with him.

When Mariani advanced his thesis in The Whole Harmonium: The Life of Wallace Stevens, published last year, the critics leaped down his throat, creating an intellectual riot in the pages of The New York Review of Books. The mystery behind an insurance executive becoming one of the greatest poets of his generation, of the same caliber as T.S. Eliot and Robert Frost, had to be silenced. In "Final Soliloquy of the Internal Paramour," one of his last poems, Stevens wrote: "Out of this same light, out of the central mind, / We make a dwelling in the evening air, / In which being there together is enough." In Mariani's reading, "being there together" does not refer to the generic companionship of women and men, but to that "You" who is the only one who can adequately respond to the structural lack that defines the human person.

As Mariani read the verses of his favorite poet, Gerard Manley Hopkins, he still got choked up, even after many years. His telling of the dark night of Hopkins's battle with "my God" was breathtaking, because it was contextualized by Mariani as the story of a man who believes he has given everything to the Lord, only to realize, in a single instant, that he has held back a "reserve," setting aside something for himself. As Mariani noted, "the only thing that makes you grow is to give yourself completely." Then, in a lightning flash of Chestertonian good humor, Mariani exclaimed, "I love this man!" and threw a kiss in the air.

Mariani was quick to accept the invitation to give a talk on American poetry at the CL vacation organized by the Fraternity of Saint Francis Xavier, a hundred or so young people from all over America. It is a group whose ratio of children to adults might seem sufficient for an immediate inversion of the winter of Western demographics. Also on vacation with the Fraternity in the verdant Catskill Mountains, only a few hours' drive from New York, was Julián Carrón.

Mariani's talk traced the seventh chapter of Disarming Beauty, in which Carrón describes the eternal trajectory of the human desire for meaning that matures to the point of becoming an entreaty. "This desire cannot survive even a few minutes if it does not become an entreaty because the true form of desire is entreaty: it is called prayer," writes Fr. Carrón. All his life, Fr. Giussani engaged in dialogue with poets who expressed sublimely the human person's innate desire, from Leopardi to Lagerkvist, from Rebora to Montale. Mariani recounted that American poetry, especially that of the modernists of the previous century, blazed with that same light.

The driving force behind the words of these writers is the religious sense. However, the establishment brushes aside these claims as foolishness. If Hart Crane speaks of "broken towers," the critics only see a phallic symbol and read every word through the interpretive lens of Crane's homosexuality. Instead, Mariani discerns a tower built to strive for ultimate meaning, even if he recognizes that human energies cannot sustain the titanic force required. Heaven must be implored to come down to earth, as in Crane's ode to the Brooklyn Bridge: "Unto us lowliest sometime sweep, descend."

Woven into the opaque verses that Mariani opened for his listeners, there is also a dialogue with the ideal woman, Mary, a recurrent and always silent presence. Mariani's talk proceeded from image to image, gave glimpses and flashes and took leaps from intuition to intuition because poets deal with things, not lines of reasoning. His presentation was a sequence of frames, just like the 1920s movies to which Crane referred. Mariani opened and closed his hand in front of the wide-open eyes of his audience and said, "click, click, click," to illustrate visually the idea of the frames of those old movies. Every "click" was a snapshot that succinctly spoke about people like everyone else, but also had the gift of being able to communicate the import of their existential questioning. There was the New Jersey physician (Williams) who stopped to listen to bells, the middle-class manager from Connecticut (Stevens) who lived a torment that nobody saw and the Jesuit missionary (Hopkins) who wanted to convert all of Wales and never saw even one of his poems published. Who knows how many of the Welsh later drew close to the Church when Hopkins's poems were finally published?

One might ask whether poetry can still speak to contemporary women and men. However, the better question is whether there are still women and men who have not abandoned their desire for the infinite. From this perspective, there is no true distinction between poetry and life. Mariani testified to this not only by sharing his expertise - terrible word! - but by immersing himself in the life of the vacation. He came to morning prayer and came to lunch and dinner, always in discussions at table with his newfound friends and his beloved wife, Eileen. He chatted with Charles and Paolo in the shade of the big tent, while peaceful hordes of children - and adults - played water games on a football-field length soapy tarp. He answered everyone's questions affably, looking at people he had just met a few minutes before with the gaze of a close friend, saying, "it's just the beginning." In the relationship with this "You" everything is united, from Pindar's Odes to the silly skits.

Eating tacos with his new friends and their families, Mariani stopped answering their questions and began asking his own. There was Carrón, with whom he inquired about the Movement and about Giussani, especially Giussani's mysterious and beautiful relationship with Leopardi, analogous to Mariani's own relationship with the poets he had become friends with along his path. Embarrassed by the noise created by so many free-range children - not exactly the ideal setting for an academic desiring structured conversation - someone apologized. Mariani responded, "This is what Paradise will be like."