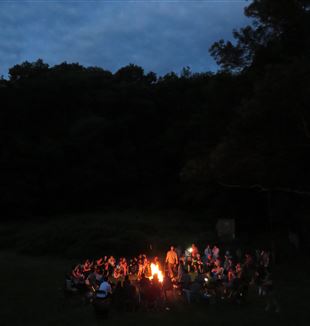 At the New York Encounter 2015, among the exhibits, one sparked a particular path: "I Am Exceptional: The Millennial Experience." Blown up photos, Facebook profiles and selfie booths showed the adventure of a group of 75 young Americans - an adventure that started with an invitation by Father José Medina to go deeper into the writings of Father Giussani.

At the Encounter, we mentioned to Father Julián Carrón what had happened during the months we spent working on the exhibit: by taking our desire seriously, we gained a new gaze on reality and on our lives. We had spent the past months sharing our thoughts and questions over Skype, and even though we lived far away and had just met each other, we formed a profound friendship. "Without knowing it, without recognizing it, you formed a Fraternity," Father Carrón commented when he heard our stories. The shared desire to continue this path together grew into something greater, a group joined by wives, husbands and friends - fifty young people (and less young people!) and about forty children - from New York to Phoenix, from Miami to Toronto.

The size of this new Fraternity and the geographic distance between its members put some logistical limits of encounters. We divided into two groups, East Coast and Minnesota, which would meet for a couple weekends during the year. During these encounters, we made it a point to spend three days together. We filled the rest of the year with regularly-hosted brunches and picnics for those who lived nearby and monthly encounters on Skype for "the rest of the world."

Last summer, we looked for a way to spend five days all together. To overcome the organizational challenges - half of us had to get there by airplane, and budgets were limited - we looked for solutions in the circumstances. For example, to save money, we decided to cook for ourselves during the whole vacation. Surprisingly, cooking for ourselves, which at first seemed tiring and challenging, revealed itself as something meaningful. Doing the shopping and cooking for so many people was hard work, but it made us more involved. As Marta (New York) put it, "thinking together about all the details of the meals made us live at the vacation rental as if it were our own house." And by living together with the Fraternity in the same circumstances as ordinary life (children to watch, meals to cook), it became clear that Christ responds to life just as it is, whatever the circumstances. 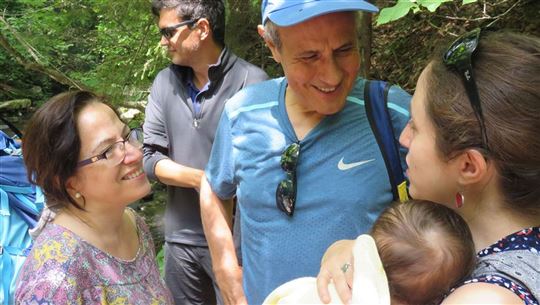 This year, as we organized a similar vacation for July, we used this discovery to help plan our trip. During a video meeting in May, forty of us shared with each other what we hoped to gain from our upcoming trip. We split up into two groups to plan different parts of the trip (songs, hikes, meals, etc.), making sure that everyone was involved. "I was in the group for food," says Porto, a Romagna native who lives in Miami. "After these weeks of work I arrived at the vacation in an unthinkable unity with the people that I had only seen in person a couple of times. Eating is eating, but in thinking about the meals together, the point was not how to spend less, but what we had in our hearts during the task." Those in charge of food did their best to think of a menu that could help us live the time of our vacation better. The food was very good, but also quick to prepare - we even got the children involved.

The vacation started in the final days of May. As the trip drew near, everyday life became charged with a new kind of excitement, because, as Jonathan of St. Cloud, Minn. discovered, "my weeks began to fill with the memory of those video chats during which we organized the vacation. When I realize that the thing I was looking forward to the most was here, I started to desire not just to do my little part, but to give my whole self in what I was asked to do - for the vacation, but also at home and at work."

We arrived in July at the Catskill Mountains in New York, where we had rented two enormous houses. Our special guest was Father Carrón. In the initial assembly, Stephanie, from Wisconsin, spoke about how her life at home differed from her life with the Fraternity. "I have this Fraternity, in which I am so loved and preferred, but then during my days I am for the most part alone at home," she said.

"But the problem is not when you are alone, the problem is what happens when you are with all your friends in the Fraternity!" Carrón exclaimed. Carrón clarified his point by telling us the story about a novice from the Memores Domini, who told Father Giussani that it was difficult to face Monday after the beautiful encounters with him on Sunday. Carrón continued: 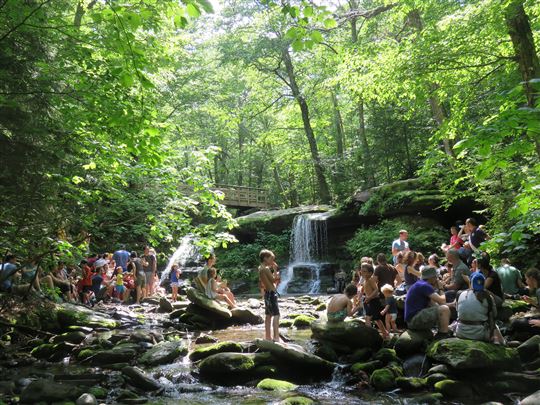 "The problem is not Monday. The problem is what happens on Sunday, because if we truly realize what is happening in the moment of encounter, without reducing it, then it will always be there. For John and Andrew, solitude won out, because someone had entered their lives forever. So, we can be here to waste time and complain about our solitude, or we can use every moment to grow in our familiarity with Christ, so that we go home with this presence in our eyes.

"And, therefore, I am happy that the Mystery did not spare you this difficulty, because otherwise Christ would always be farther and farther away from you, reduced to something fragile and sentimental that disappears at the first difficulty. As a Fraternity, we should help each other not to spare ourselves these challenges but to stay in front of them, so that they become a path to certainty - we are not together to generate Christ, but to help each other recognize Him."

In the following days, Father Carrón helped us live the vacation like a "Sunday" in which we didn't stop at the surface of things, because, as he said, "not even a beautiful vacation is enough for our hearts. If we do so many things for other people without understanding that we do them for Christ, we lose the best, because the source of our joy cannot be something created with our own hands, but only by Him. You have prepared all these things, taking care of every smallest detail as a cry to Christ to be present in our midst." Carrón asked deep questions about many things - a dramatic relationship with a father, a colleague who decides to do in vitro fertilization, the smallest difficulties of these days together - all the while reminding us that "you already have all the answers, you don't need anymore. Now you have to walk the path to understand how they respond to the questions that life brings you."

Our conversations continued throughout the vacation. We took hikes, played games, heard a lecture on the Unnamed (the cryptic character in Manzoni's The Betrothed), had an encounter with the poet Paul Mariani and listened to two astrophysicists talk about the life of the stars, keeping our conversations going all the while. The conversations during the day, at the dinner table and after dinner around the campfire, under the starry sky, all started with the simple question: "What did you see today?"

The final evening around the fire, each person spoke about the little and big discoveries of those days. Rich from New York spoke emotionally about his son James, a six year old who went to bed that evening exclaiming, "Papa, I want to be with these friends forever!" Lisa, from Stillwater, Minn., said that during the first days of the vacation she felt a weight because she didn't feel preferred. One afternoon during the games, she was surprised by the tenderness she felt for the children. "But how could I love like this without being continually loved and generated?" she said.

Maria, from New York, said that her husband and she had been so busy with organization that they had hardly seen each other. She added that even though she enjoyed spending quiet time with her husband more than anything, they had discovered their relationship in a new way by giving themselves for something great. Moreover, she said, the time apart had made their time together more meaningful. "In the brief greeting at night when we came to our room, there was a tenderness and intensity between us that we rarely experience," said Maria.

"After all that we've heard," Carrón concluded, "we are in the same situation as the disciples. 'Who do you say that I am?': our whole life plays out in our response to this question." The adventure of Monday has just begun.