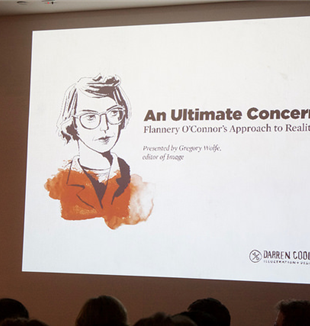 The Crossroads Cultural Center organized this presentation on the life and works of Flannery O’Connor. Its focus was on illustrating the relationship between O’Connor’s writing and reality in the writer’s own words, in order to enter the heart of her thought.

Greg Wolfe, editor of Image and speaker for this event, made some introductory remarks about O’Connor’s style and her view of her own work. She saw herself writing in the romance tradition—not, as Wolfe reassured the audience, the kind of pulp fiction romance with “sweaty, half-naked men,” but rather romance as prophetic literature, much in the tradition of Nathaniel Hawthorne. The romance writer is a prophet of the real because, as we heard O’Connor herself explain in a voice recording, she took it upon herself to show that naturalism, the belief that what is on the surface is all that there is, is not realism. Naturalism was a quite wide-spread philosophical belief in O’Connor’s time and she sought to respond to it not by means of a transcendental-type literary style (such as Emerson’s and Thoreau’s), but rather through a comedic, grotesque approach to writing.

Flannery O’Connor was born in 1925 in rural Georgia. She was deeply immersed in a specifically Southern culture of manners and niceties, but her family’s Roman Catholic faith set her apart from her neighbors from the start. A fiercely intelligent and contrary child, she described her childhood self as a “pigeon-toed child with a receding chin and a you-leave-me-alone-or-I’ll-bite-you complex.” She spent her high school and college years working as a cartoonist, already displaying a keen eye for social satire which she would employ as the driving force of her writing. After years spent at the University of Iowa’s prestigious Writer’s Workshop and in the company of other writers and artists, O’Connor was diagnosed with Lupus in 1952 and forced to move back to Georgia, where her mother could take care of her. She continued to write and publish until her death in 1964, at the young age of 39.

Despite her illness, O’Connor’s last years were intensely fulfilling. She spent her days writing incessantly and raising all kinds of exotic birds, maintained a wide correspondence with writers and academics, was a prolific book reviewer, and traveled often, despite her failing health, to give lectures on literature and faith. This last theme was, as she herself said, the point of all her work: “the only concern, so far as I see it, is what [Paul] Tillich calls the ultimate concern. It is what makes the stories spare and what gives them any permanent quality that they may have.” 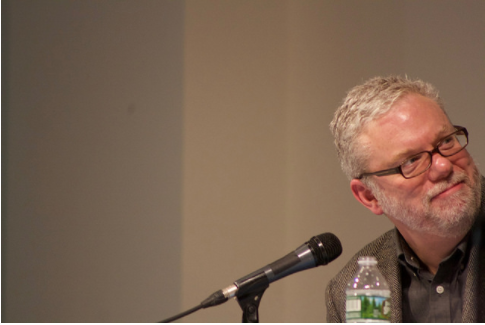 For Paul Tillich, faith itself is the ultimate concern, that which “claims ultimacy” and thus “demands the total surrender of him who accepts this claim,” and yet O’Connor’s literary works seem more concerned with the possibility of faith and redemption than with faith and redemption themselves. The presentation made this clear in its analysis of two of O’Connor’s most famous works: Wise Blood, her first novel, and “A Good Man Is Hard to Find,” arguably her best-known short story.

Wise Blood is the story of Hazel Motes, a recently discharged World War II veteran who returns to ordinary living and to his life-long struggles with faith. As Hazel’s encounter with a taxi driver shows, the story often works on two levels—the comedic and the theological. The driver observes that Hazel looks like a preacher when Hazel is in the cab in order to visit a prostitute. And it is clear that Hazel’s decision to visit “the friendliest bed in town” is not the result of a moral weakness, but rather a decision to rebel against an imposed moral order. But no matter how many times Hazel denies it, the cab driver insists on believing that Hazel is a preacher. After all, a preacher would certainly deny being a preacher if he is seen on the way to a prostitute’s house, and so it is impossible for him to convince the driver that he is no preacher. Besides, as the driver says, Hazel looks like a preacher and his hat looks like a preacher’s hat. Now, the reader can stop at the comic character of this scene, but O’Connor invites us to go deeper. She wants us to see what the driver sees—Hazel’s inescapable moral intensity, his desire to craft a good destiny for himself.

In fact, throughout the novel Hazel is blind to the characters who act as moral mirrors, who reflect a moral intensity that we as readers can see though Hazel himself cannot. O’Connor calls this moral intensity Hazel’s “integrity,” which shines not through what he does, but through what he can’t bring himself to do. “Free will is not one will,” she says, “but many wills in one man.” For O’Connor, what is of most value in Hazel, what we should look at above all else, is not his moral failings or his outright disdain of Christ and Christianity, but rather his own ultimate concern—the desire to live his life intensely. In presenting us with a character who rejects Christ in the name of his desire, O’Connor witnesses to us her faith in a reality that does not let us lie to ourselves without suffering the consequences, a reality that does not let us stray without letting us know we have strayed. This is precisely what happens to Hazel at the end of the novel. A series of events force Hazel to look at the fact that he is in need—of penance, of purification, of liberation. As Wolfe puts it, Hazel “gets things wrong, or in the wrong proportion, but we sense he is on the right track. He is not in hell; he is in purgatory.”

“A Good Man is Hard to Find” offers the reader lighter social commentary but a more grotesque end. It is a story with a simple plot, about people who are not taking reality seriously enough. This failure on their part is ultimately fatal. The grandmother is a proud woman, concerned with social pretensions. She and her family are due to go from their home in Georgia to Florida to spend some vacation time, but she does not want to go. She would rather go to Tennessee to visit old acquaintances and cites the presence in Florida of a serial killer, the Misfit, as a reason not to go. On the way, they have a car accident and wait along the side of the road for help. The grandmother flags down a hearse and the men inside turn out to be the Misfit and his henchmen. As the Misfit talks to the family, the grandmother is able to look at him with tenderness, calling him one of her children and reaching out to touch his shoulder. The Misfit jumps back and shoots her dead, along with the rest of the family. He then comments of the grandmother that she would have been a good woman “it had been somebody there to shoot her every minute of her life.”

As Wolfe points out, it is important to note that the grandmother and the Misfit have the same problem and are in need of the same grace. The former is so caught up in her ideas of how the world should be that she does not see the poisonousness of her pretensions, which are ultimately a pretension not to depend on anything but on herself and her convictions. The latter, too, is unwilling to welcome anything but his own meanness toward the world, so much so that he simply cannot accept the grandmother’s tenderness toward him. In the final analysis, this story shows us that violence is not something done to humans by the gods, nor something absurd, but rather the result of our refusal to recognize the “hard edges of reality,” as Wolfe put it. It is only by acknowledging, or running into, these hard edges that we are humbled and become again like children.

As this event brilliantly showed, Flannery O’Connor is a writer who does not spare her readers the hardness of reality. But it is a corrective, even a redemptive hardness. Wolfe’s said it best in his closing comments: we should all be in shock after reading her. Perhaps we don’t need to be shot every minute of our lives, but we do need to be knocked down; humbled, even humiliated, so as to see our own absurdity and the grace that can save us now.