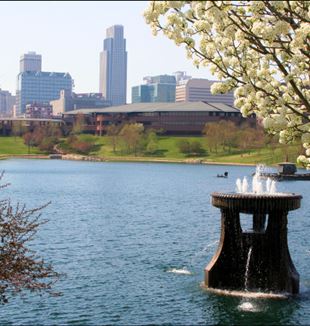 The evening after Trump was elected, everyone was there for the CL School of Community in Omaha, Nebraska. As the country tried to work through the shock, there in the heart of America, in a Republican-majority state, each of those 30 friends did all they could not to miss the Wednesday appointment, drawn by the need to look together at a day that hit America like a hurricane. “Irrespective of whether they were happy or disappointed with the results, I was impressed that everyone wanted to share how they had discovered themselves that day, going to the office or to school or speaking with their neighbors,” said Martina, a 34-year-old assistant professor of medieval history.

Like Leah who, going into work that morning, found herself surrounded by an apocalyptic air. “Many of my colleagues couldn’t even manage to sit down at their desks and turn on their computer. I asked myself, ‘How is it that I, despite my many perplexities, came here with even more desire to do what I have to do?’ Within that general uncertainty, I realized I was a point of stability.” And so she found herself mostly listening. “The conversations were something new. Usually, you never talk about politics. Even less about life and what you really care about. But that day, something broke the ice.”

The same thing happened to Martina. At the college where she teaches, some of her colleagues even canceled their classes. “In my department, some people were crying, or hadn’t slept that night. In their eyes, they saw the ‘glorious’ trajectory of democracy caving in, at the hands of their fellow Americans.” One professor of American history even reached the point of asking herself what sense there was in teaching what she had always taught. “I told her that I was even more passionate now about going to class to educate the students to a true use of reason, because it’s essential in building a society,” she says. “But she stopped crying when I pushed her to look at all the good things surrounding her in life. Starting with her children, her husband, including our friendship.” That evidence was enough to help open her eyes again.

For many of them, the words of the flyer “Protagonists of Our Own History,” a collaborative effort of all the CL communities in the U.S. leading up to the election, started to come to life in the moments of that day. “It was exciting to discover in those more honest conversations that it’s possible to go to the heart of the American spirit and affirm that there’s still a good we can work toward together,” Martina explained. “I say this even though the atmosphere here often becomes tense. On many campuses, acts of aggression among students have reached such a level that university administrators are opening new support offices. People feel justified in building even higher walls.”

The months leading up to the election were very lively for the Omaha community. There were many conflicting views, but that was not a problem. The desire to understand together was stronger. They even got together to watch the televised debates: typically an hour-and-a-half of insults. “We were so dissatisfied that, after turning off the TV, we couldn’t just go home,” John told us. “Often, we were up late, continuing the discussion. And we asked friends to join us to help us better understand issues of taxes, laws, and foreign affairs.” After one of those evenings, John wrote to everyone, “I may have understood for the first time what it means that reality is positive. Looking at each other this way, seeing that esteem we have for each other, I understood that He is with us even in the smallest details. Exactly like when He went fishing with the Apostles.”

Our friends in Omaha didn’t just have the question of picking a President to face. For them, this election was a “doubleheader.” On November 8th, they also had to voice their position on a referendum to reintroduce the death penalty, which had been eliminated in the state of Nebraska in 2015, but was being proposed again by governor Pete Ricketts, who is Catholic and pro-life. “Right away, we found the motivations of the various groups in the ‘no’ campaign to be insufficient,” Martina said. “The secular voices all hinged their entire argument on the financial savings. A prisoner with a life sentence actually costs less than one on death row, because of the extremely complex and drawn-out legal proceedings.” Alternatively, on the Catholic front, with polls showing 80% of practicing Catholics favoring the death penalty, the message was to vote against it out of obedience to the bishops. “We realized that deeper reasons were needed to convince people,” Martina said. Together with Dave, Meredith, Mary, and Fr. Scott, she started out with a simple question: “Why do we always defend life?”

The fruit of their work together, which included gatherings, lectures, and discussions, culminated in the form of a flyer. “We started from the experience each of us has of our own mistakes and our ineradicable need for forgiveness. And from the fact that, because of this, we can’t help but feel suffocated by a justice reduced to an eye for an eye. We desire more, even for those stained by terrible crimes. We desire that mercy capable of changing any heart.”

The flyer didn’t change the results of the referendum, which saw a victory for the “yes” vote with 61%, but it was certainly an original viewpoint, if only because of the fact that it was written with the lives of the 11 currently condemned people in Nebraska in mind. Their executions had been suspended for two years, but now would be carried out. “In reality, that’s not quite true,” Martina explained. “Like in other states, the drug used for lethal injections is no longer sold. It’s a paradoxical situation. They have to find a ‘human’ way of killing. And so another question came to us: ‘Why can’t they find it? What is the real problem here?’”