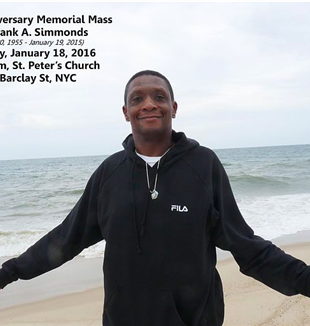 It is said that the things that change the fate of the world are the most glaring or obvious. However, many times the beginning of something new is subtle, but as real and unavoidable as the growing grass. Monday morning, at the end of a long illness, in Brooklyn, not far from where a few weeks earlier a policeman was killed in a clash during inflamed racial tensions in America, Frank Simmonds, one of many African-Americans in New York and one of the many who suffer, died.

His human story is really not just another among many, but indeed there is something special, particularly in a time in the history of the US and the world in which it seems increasingly difficult for different races and religions to coexist. Frank was happily married; he had four children whom he adored, and a regular job. But his past life was far from linear. He came from a middle-class family and at the age of seventeen his mother died of cancer. The illness and death of his mother seemed to Frank the culmination of a life that for him, as for many, lacked meaning. Drug use, the way he forgot the harshness of reality, quickly left him sharing life with the homeless, for almost ten years.

As for so many, his young life would have been wasted had Frank not met, almost by chance, a white woman named Rita. First a friendship was born among them, and then quickly it became a love anchored by the deeply rooted faith of this Christian woman. Frank found in Rita the desire to live again. She convinced him that recovery meant to take his health seriously. The journey was tough but Frank discovered, with faith in Christ, a comfort and a reason to fight. Overcoming his drug addiction, he found a job and married Rita.

His deep authenticity and his wonder so stuck Rita’s friends in the community of Communion and Liberation in New York, that they wanted Frank to be their responsible. They wanted to look at someone who knew he had received everything; one who lived with gratitude. “In his presence it was easier to feel free, to look at myself without measuring and calculating, as if there was some practical way to attain gusto, life (says Susan, a friend); no one like him was able to see my freedom.”

From this marriage came two wonderful children, but the story was not like a Frank Capra film. The happy ending was not because things “went well.” After a few years, Frank got cancer. And, it was in this situation that the entire fabric of his experience emerged: living the disease, working and living normally, his face the same as before, smiling, deep and peaceful, full of positivity, offering his suffering with simplicity as participation in the sacrifice of Christ.

Until the last couple days in the hospital where he was admitted, he did not stop thanking the doctors and nurses for their work, communicating peace and hope to relatives and friends as they remained in the devastating experience of the disease. He died the morning after the end of New York Encounter, a public cultural event organized by his friends in Manhattan, almost not wanting to disturb it, having offered his suffering for them. A posthumous Christmas story? No, that upsets the skepticism of a tired bourgeois society, even one that seems to unite against violence.

In the modern world where cynicism and nihilism seem to have already won, as the newspapers, television, and columnists seem to say, Frank represents an authentically new world, where the desire for happiness and the strength of faith are victorious; where there is no circumstance that determines the social life of man, there is no race that divides, no degradation that cannot be escaped, and no disease that can destroy hope.