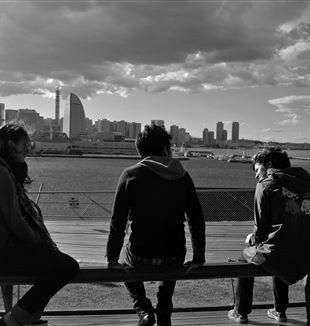 The upcoming elections have highlighted a stark reality: in the land of opportunity, those with means thrive, but many others struggle to survive. Our country was founded on the premise that hard work and personal initiative would grant us the fruits of life, liberty, and the pursuit of happiness. Today, that promise seems to escape us.

The income of farmers, shop owners, and service industry workers is insufficient to sustain a dignified life. The elderly, after years of toil, cannot afford the copay for their medications. Families with both parents working full-time must incur paralyzing debt to send their children to college. A country built on immigrant labor fears and disdains its newest wave of immigrants. Too many young people are in prison instead of school, and often for nonviolent crimes.

Many frame the current situation as a crisis of the political establishment, yet the issue is much deeper.

We live in a time when it is no longer customary for Americans to take an active role in civic life. Whereas in 1975 over 60% of American citizens read newspapers and participated in civic meetings, by 2005 those numbers had been cut in half. We have reduced our political agency to merely expressing our opinion on Facebook, or somewhat more actively, to casting a ballot. We seem to have lost the deeply rooted desire to be protagonists in the political process which has historically distinguished American democracy. The apathy that characterizes our time does not originate in the political process, nor does it confine itself to politics. Its source is quite different—we are dealing with a crisis of the person. We seem content watching and commenting, drawing back into our safe spaces, letting history run its course.

However, by doing so, we deny the profoundly human desire to be responsible actors, to be part of something great, and to grapple with social reality—all of which lies at the core of any democratic endeavor. Politics is an expression of this compelling need to respond to existing local, national, and global challenges and to create the conditions for people to live freely and with dignity. For this reason, political engagement should not be restricted to participating in the electoral process. In the words of Alexis de Tocqueville, “to relinquish one’s exercise of freedom to voting, as the only means of political engagement, will result in losing little by little the faculty of thinking, feeling and acting”—thereby crippling our personal development. Engaging in social and political life such as neighborhood associations, school reform ventures, town hall meetings, cultural centers, or faith-based charities represents privileged opportunities, not hobbies for the civically minded.

This desire to be responsible actors, protagonists, cannot be sustained on its own. We need places that confront us with who we truly are and what we desire, that nourish us in hope. Religious institutions play a critical role in our country because they are entrusted with the education of people’s consciences and their communal responsibility.

As Pope Francis reminded us in his speech to Congress, “The challenges facing us today call for a renewal of that spirit of cooperation, which has accomplished so much good throughout the history of the United States. The complexity, the gravity and the urgency of these challenges demand that we pool our resources and talents, and resolve to support one another, with respect for our differences and our convictions of con-science.” Cooperation and communal responsibility do not demand relinquishing what we value. Dialogue, our chief tool for engaging with others, requires that I propose to the other what I live for and simultaneously listen to the other’s search for truth with curiosity and affection. With the aim of moving away from an “agreeing to disagree” mentality, we seek to promote a culture of encounter in which there is an earnest dialogue about what is most meaningful in our human existence. These interactions will inevitably uncover deep commonalities and profound differences. However, without the courage to look at both, we are incapable of saying or building anything consequential.

We are called to be the protagonists of our own history by witnessing to one another what we hold most dear, and by supporting one another in the pursuit of truth. This is what a free democratic country needs. Otherwise, we will become prey to the tyranny of the loudest voice in the room. This is the spirit of the American people we seek to rediscover and develop. In November we will vote for the candidate that most closely mirrors our genuine desires, but after having voted we will not be finished. There is much to be done.