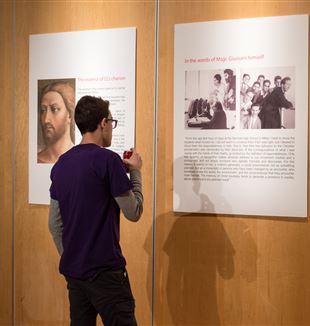 Rights, Relationships, and the Self

As the second day of the New York Encounter began, people slowly filled the hall of the Metropolitan Pavilion. It is the morning, the day after a brief but intense first day. Yet there was no trace of tiredness; the same exuberant and expectant atmosphere was tangible. A new day of renowned speakers and experts awaited all of the visitors of the Encounter. The first of these was a panel discussion on the relationship between the search for identity and the proliferation of new individual “rights” brought about by social change and technology. Moderating the event was Marta Cartabia, Vice-President of the Constitutional Court of Italy and the talk featured celebrated legal scholar Jennifer Nedelsky of the University of Toronto and John Witte, Professor of Law at Emory University.

Cartabia introduced the discussion by remarking that that the concept of human rights, whether individual or constitutional, has a glorious history whose origin is difficult to pinpoint. After World War II, in response to totalitarianism and its atrocities committed against humanity, the 1948 Universal Declaration of Human Rights represented a flourishing of concern for humanity, especially the weakest. In the past twenty years, she explained, talk about human rights has become more insistent and overused, “We are in an age of rights, or an age of new rights.” The language of rights has become the common currency of public discourse.

The panelists spoke about the language of rights, why it is so successful, whether we need more rights, and if so, then what those might be. Jennifer Nedelsky pointed out that when we call something a right, we are highlighting the importance of a value and choosing particular values to be of primary importance. 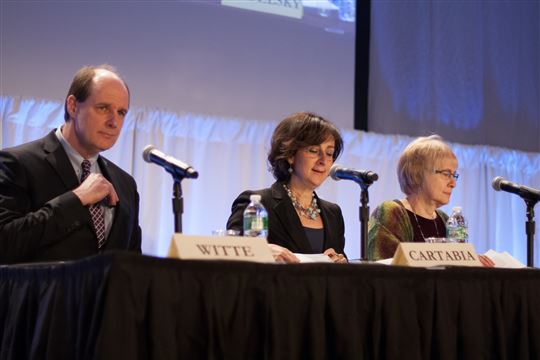 Cartabia noted that one of the most significant changes brought about by the shift in viewing a human being in terms of rights was how the individual was put at the center of society the person became a subject, not an object. Observing that the new rights movement often had the effect of fragmenting the person and defining him according to only one particular trait, she asked the panelists how they would describe the “rights bearer,” the person whose rights must be defended. Witte very strenuously contended that the face of the rights bearer is that of every person, who has rights that flow from his or her very being. Nedelsky affirmed that a right must be practical in order to be real in the lives of people. She stressed that a person always exists within a particular body, in a particular context, and within concrete frameworks that need attention.

In Europe the individual has been put in the center of concern Cartabia told us, “but the result is a society of self-centered individuals.” She asked whether the specificity of these new rights might have bad consequences. Nedelsky pointed out that rights shape relationships and although those relationships can be full of conflict, they can also turn our attention to reciprocal obligation. Witte elaborated that every right exists alongside other rights and that no right is absolute, not even religious rights, but that religion plays an important role by providing a limit to our sense of entitlement and balancing it with a sense of responsibility and duty.

In closing, Cartabia stressed that we do not need or want to abandon rights, but that we need to test rights and right practice continually in order to keep the experience of rights true to real human experience. Cartabia pointed out that beyond the law there is also culture, which shapes rights. She closed by drawing our attention to the reality all around us. “The volunteers here,” she pointed out, “are making a great contribution that contrasts the selfishness that is such a risk in our society.”

Listening to interesting people speak is never really boring, but you can’t just listen, you also need to see. This was evident in the beautiful documentary on the 60th Anniversary of Communion and Liberation, The Beautiful Road. Waking up with the cows in Emilia-Romagna, saying Morning Prayer with the kids in Milan, meeting for School of Community at a bar in New Zealand, singing together in Africa, or the New York Encounter in New York City—life is meant to be lived and witnessed! The video told the story of the life of the movement across the world through the faces and voices of those who live it, submitted by them personally, mostly on what was probably the video recorder on their cell phone. The three vignettes (New York Encounter, Meeting Point in Africa, and Cleusa and Marcos in Brazil) revealed how much of an impact the experience of Communion and Liberation can have on a place, but there’s not doubt here. You see it everywhere you go. 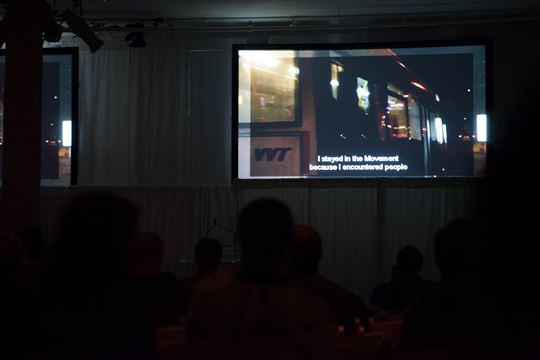 “Let’s go eat,” Justin tells me as we walk out of the auditorium. Lunch with friends in the NYE Café is always a beautiful moment. Although it can seem frenetic, the cheerful faces of the servers, the friends from across America who see each other every year at the Encounter, and the food that seems like it was just cooked in Grandma’s kitchen—all of it—feels like a family reunion. A family that is linked by a curiosity and an interest in everything good that this world has to offer.

“Somewhere in the world my real people longed for me”

After lunch we headed back to the North Theater to hear from Annette Insdorf, the Director of Undergraduate Film Studies at Columbia University, leading the participants of the New York Encounter on an adventure through American cinema and its portrayals of the human search for identity. Insdorf suggested the title of the talk—the search for identity—was incomplete, and would be framed within a search for the cinematic language apt to express this search. The films presented the evolving “shapes” of the protagonists in American film, that reflect our collective responses to social institutions and to the particular values and problems in our history. A somewhat bleak narrative emerged: the paralysis of The Graduate gave way to the loneliness of Travis Bickle (Taxi Driver) and his eventual violent attempt to cleanse the city with blood. Two paradigmatic films of the late nineties—Fight Club and American Beauty—showed protagonists whose struggle for identity is punctuated on the one hand by sense of disenfranchisement and appetite for destruction, and on the other by a resigned regard for the deadening effect of suburban life. Insdorf noted the difficulty in looking at the struggle for identity in the face in the case of Fight Club and American Beauty, the sense of history and memory is voided in these films. 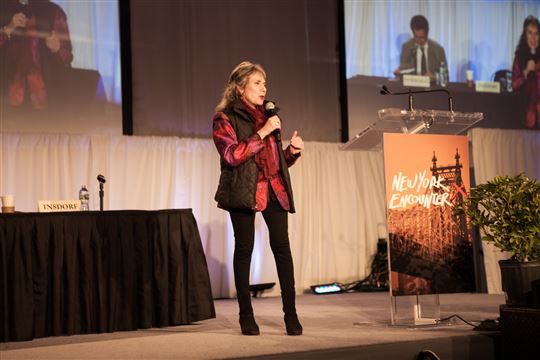 Insdorf suggested that these films show that we are not born with an identity, but that identity is, in her words, a “slippery process.” The self, she claimed, is something we create. Yet, this exaltation of the individual quickly becomes a burden. The protagonists begin stuck, suspended, underwater, half-awake; when they are set in motion their restlessness seems unable to find a term in which it can rest. For this reason, the most striking remark of the presentation came from Kevin Spacey’s character in a movie called The Shipping News. He reflects that he always had a sense that he was born in the wrong family, and that “somewhere in the world my real people longed for me.” This remark seems to undercut the fluid reading of the self, showing a detectable, stable certainty at the heart of the search for identity.

He is If He Evolves

We took a quick break to visit some of the exhibits, then headed to “The Emergence of the Human Face,” a discussion about the degree to which evolution can account for everything in human life. First to speak was Dr. Kenneth Miller, professor of Biology at Brown University, Dr. Martin Nowak, the director of the Program for Evolutionary Dynamics at Harvard, and Dr. Rick Potts, the Smithsonian’s director of the Human Origins Program and curator of anthropology.

Speaking about the perceived controversy between evolution and the religious view of the person, Dr. Miller expressed that fidelity to the facts of biology does not rule out the possibility of a creator; the “no room for God” understanding is based entirely on the misuse of science. Instead, Dr. Miller asked why it is a problem to think of life as something formed by natural processes, pointing out that it is not just scientists, but also St. Augustine, who thought this way. Why is it a problem to think of ourselves as part of the natural world, he asked, when the Bible tells us we are dust? In the end, Dr. Miller pointed out that the wondrous complexity of evolution leaves space for the idea that the workings of nature are not just random, but the making of a Creator. 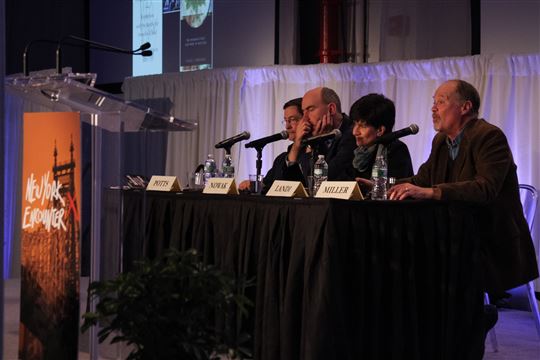 Dr. Nowak began with a self-deprecating joke about mathematicians, continuing the approachable tenor set by Dr. Miller in approaching such a cosmic issue as evolution. In Dr. Nowak’s words, “cooperation is the master architect of evolution.” The “popular” mechanisms of evolution do not explain why certain species survive and others perish. Dr. Nowak showed, in fact, that the flourishing of populations depends on the paradoxical gains of cooperation; the balance between cost and gain actually increases when individuals cooperate instead of competing against one another. He ended his talk saying that “now is the time for mankind to begin to learn the laws of global cooperation,” meaning that the present generation needs to learn to pay the cost of resource management and the care for the environment as a benefit for future generations.

The last speaker, Dr. Richard Potts, contributed to the conversation not as an evolutionary theorist but as a field scientist uncovering the hidden marks of human life throughout the past. Dr. Potts explained the fundamental shift brought to evolutionary theory by discoveries in environmental science. The environment in which our ancient ancestors lived was constantly fluctuating between extremes. He proposed that we begin to see the development of humans as one that is due to adaption to violently changing environments. It is in the ability to adapt that we begin to see the ingenuity proper to man, a survival of the versatile not the fittest, “which liberated our ancestors from the constraints of biological evolution.”

Saturday evening was marked by a beautiful encounter with those who have been changed by their experiences with the disabled, and the debut performance of Adam Danced an original work by Jonathan Fields. Be sure to check back for more on the evening.