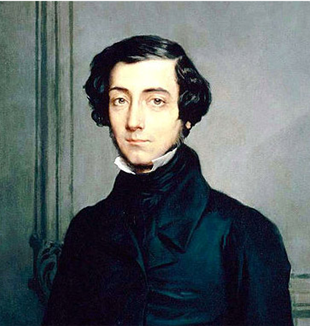 If there are two things that one is likely to hear from college faculty today, they are that 1. Students are too careerist, and 2. We need a more democratic society. They worry about the growing utilitarian cast of education in general, as well as the remnants of hierarchy, authority, paternalism, and inequality in today’s society.

What they generally don’t see is the deep underlying connection between these two phenomena. A familiarity with Tocqueville’s essential Democracy in America would prove enlightening.

Tocqueville expresses wonder and awe at the activity of the Americans that he encountered during his visit to the United States in 1830-31. In contrast to the relative complacency of people in their social roles in aristocratic Europe—where no amount of work, effort or activity could move one either from the ranks of the aristocrats to the commoners, or vice-versa—Americans live daily with the awareness that their station in life is one of variability, potential, and fragility. The result was a society that was, by appearances, industrious, but more deeply riven with anxiety. Thus, Tocqueville was moved to call this condition one of “restlessness,” or “inquietude,” the inability to be “quiet” or still or in a state of quiescence.

In one of his justifiably most famous chapters, Tocqueville describes the resulting social state. Chapter 13 of Part 2, Volume II of Democracy in America is entitled “Why the Americans are so Restless in the Midst of their Prosperity,” which begins:

"In America I saw the freest and most enlightened men placed in the happiest circumstances that the world affords, it seemed to me as if a cloud habitually hung upon their brow, and I thought them serious and almost sad, even in their pleasures.

The chief reason for this contrast is that the former do not think of the ills they endure, while the latter are forever brooding over advantages they do not possess. It is strange to see with what feverish ardor the Americans pursue their own welfare, and to watch the vague dread that constantly torments them lest they should not have chosen the shortest path which may lead to it."

I think often of this passage, having taught at three extraordinarily prestigious and famous institutions of higher learning—and having witnessed daily exactly this “cloud” upon the brows of our highest-achieving students. Far from being complacent and self-congratulatory about their membership in America’s (and, increasingly, the globe’s) elite, they are anxious and perturbed, worried about their prospects for “success” and whether they will measure up to others who are similarly blessed with such advantages—while staying ahead of those who are aiming to overtake them from below. They laugh nervously but sympathetically when I recount their momentary joy when they learned of their acceptance to an institution like Notre Dame, Georgetown, or Princeton—and their near-immediate anxiety after opening the “thick” envelope, whether they’d enroll in the right major, receive the best internships, and eventually gain admittance to the best graduate or professional schools, win the top prizes, or receive offers from the top firms. When I tell them that they will never stop worrying, that cloud on their brow darkens, but their heads nod in understanding.

Tocqueville relates that this is one of the central consequences of democracy. Democracy’s relentless drive to equalize our station in fact makes democratic humans extraordinarily fretful about their station. Having rejected the arbitrary inheritance of birthright and rank of aristocratic ages, democracies inflate especially differences of attainment in the material realm. Democratic citizens become obsessed with material markers of success—not only what one might need to lead a good and decent life, but how one’s attainments compare to others. We become driven especially to measure our worth in monetary terms, and economics and business (note the word—”busyness”) becomes the most important activity of our society.

For this reason as well, Tocqueville observed that democratic peoples would have little patience for “theory,” instead demonstrating a preference for practice. They would regard the classics as generally old and superceded opinion, instead preferring what “works.” While he never devoted a chapter to education, particularly university education, based on everything he writes elsewhere, one is justified in concluding that he would have predicted that increasingly “democratic” universities would become more elitist and “meritocratic” (though, ironically, “merit” would tend to be clustered among children of the rich), and that one could expect a growing demand for “relevant” and “practical” training in preference to study in the “theoretical” areas of humanities, arts, literature, or even theoretical sciences.

Ironically, democracy would increasingly produce workers and consumers, not citizens. Their concerns and obsessions would run almost entirely to the private realm, and the thoughts they might spare for public life would be driven by these same private concerns—what is government doing to pump up economic growth, how much of my earnings does it demand, is it supporting “upward mobility”?

When Tocqueville speaks of democracy in a more ideal sense, however, he speaks of independent citizens who demand nothing less than active participation in self-rule. He admires the spirit of liberty that he witnessed in parts of New England (where there were literal, not televised, “town hall meetings”), which imbued those participants with a belief that freedom was only achieved in conditions that permitted a flourishing of civic self-government. His worry was that “democracy” (which would incline us to materialism and privatism) would defeat democracy.

His ultimate fear was that this tendency toward privatism—especially the “restless” pursuit of thing after thing—and disinterest in the banal activities of self-government would result in an apathetic and disconnected citizenry whose main interest would be security and comfort amid the unpredictability of their economic lives. In another famous chapter, much admired by conservatives—”What Sort of Despotism Democratic Nations Have to Fear”—Tocqueville strains to describe a new kind of tyranny that he fears and expects to arise from democracy, the rise of a mild and gentle “tutelary power” that would seek to cushion citizens against all the dangers, harms, and risks of the world. Tocqueville expresses discomfort of how best to call this kind of government, since at all times in the past, a tyranny implied a form of government imposed by force upon a people against their will. But this new specter, “democratic despotism,” arises through the invitation and desires of the democratic citizenry itself. In fact, they will call it “democracy,” not despotism. But its cost is steep:

"After having thus successively taken each member of the community in its powerful grasp and fashioned him at will, the supreme power then extends its arm over the whole community. It covers the surface of society with a network of small complicated rules, minute and uniform, through which the most original minds and the most energetic characters cannot penetrate, to rise above the crowd. The will of man is not shattered, but softened, bent, and guided; men are seldom forced by it to act, but they are constantly restrained from acting. Such a power does not destroy, but it prevents existence; it does not tyrannize, but it compresses, enervates, extinguishes, and stupefies a people, till each nation is reduced to nothing better than a flock of timid and industrious animals, of which the government is the shepherd."

In contrast to democracy understood as a discipline of shared self-governance—leading to self-command and an inclination to obey laws made by oneself—Tocqueville describes here instead a people altogether infantalized by their private materialist obsessions and civic indifference. Rather than making them into men and women, this form of democracy creates perpetual adolescents: “[Democratic despotism] would be like the authority of a parent if, like that authority, its object was to prepare men for manhood; but it seeks, on the contrary, to keep them in perpetual childhood.”

The answer to this threat, then, isn’t simply “more democracy.” Tocqueville, rather, pointed to certain arrangements in which active self-rule was more likely to occur—especially local, small-scale settings in which people would develop a strong sense of investment and care in the outcome of decisions. As our economic interests have swamped our civic commitments, our attention naturally drifts away from such smaller scales in preference for global markets (beyond our control) and government (that no longer seems to be the rule of the people).

Today, “thought leaders” are likely to call for more democracy by restraining the power of the Corporations and global market. But we need to discern more clearly that the very prominence of these institutions, along with a “tutelary” government, is itself the result of “democracy.” What we need is not “more” democracy, but better democracy—developing the arts of self-government closer to home.