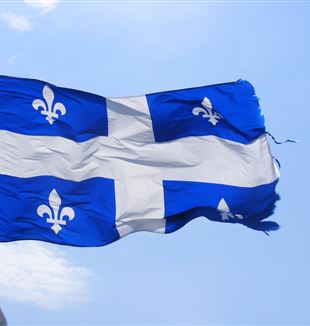 There is a passage in the opening pages of Albert Camus’ The Fall where the judge-penitent, Jean-Baptiste Clamence, refers to his neighborhood in the old Jewish quarter, which the Nazis cleared during the war: “What a cleanup! Seventy-five thousand Jews deported or assassinated; that’s real vacuum-cleaning. I admire the diligence, that methodical patience. When one has no character one has to apply a method” (the emphasis here is mine). In other words, when there is no subject to relate to reality, a method is blindly applied to obtain a stated end. No deeper reflection on human or societal needs, aspirations or experience, only the mechanical application of a method to obtain results. This could very well describe the attitude of the Quebec government when it announced the introduction of a Charter of Quebec Values, which was originally supposed to be entitled the Charte de la laicité.

The aim of the Charte is to pursue the project of separating Church and State that began with Quebec’s Quiet Revolution in the 1960s. The plans of the Parti Québécois (the separatist party that is currently in power) are to codify that separation, to define “reasonable accommodation” with regards to religious groups, and to establish clear norms on what religious symbols or dress may be worn by state employees, who, according to them, “incarnate” the State. The proposed legislation would have provincial bureaucrats, judges, police and municipal employees, teachers, university professors, doctors and nurses, and even state-funded daycare workers follow the guidelines. One might understand the prohibition of the niqab, as it covers one’s face, but kippas, hijabs, turbans, and large crucifixes and stars of David would also be on the “do not wear” list. As Archbishop Christian Lépine of Montreal has noted, “charter” is not the proper term for such a document. It is not protecting any rights but rather reinforcing a State secular creed while consigning anything to do with religion or faith to the private sphere. The Charter, says Msgr. Lépine, is not about reinforcing a secular State but about trying to secularize society, and the State has no business there.

How did we ever get into this mess? The 1960 provincial elections in Quebec unleashed the so-called Quiet Revolution, which introduced an interventionist State and a new, modern Québécois nationalism, decidedly urban-based and secular as opposed to the older, rural French-Canadian Catholic identity. Since then, Quebec, which had been perceived as a Catholic society, became decidedly secular. In the 1970s and beyond, the Catholic Church was in a free fall as regular Mass attendance declined to the lowest levels in North America. It must be admitted that Church leaders had little to propose to the new ideologies that predominated in Quebec, and even when Quebec politicians asked the federal government to remove the constitutional protection of Catholic state-funded schools in the mid-1990s, they did not put up any opposition but simply accepted this as inevitable.

Little agreement. With the Church out of the picture, the Québécois have had to reconfigure their identity, but with difficulty. Although there is a continuous reference to a pensée québécoise, there is little agreement on what constitutes that thought. At most there is consensus on a few basic values–the primacy of the French language, the equality of men and women, and separation of Church and State. Since the 1960s, the birth rate among Quebec francophones has fallen dramatically and is among the lowest in the world. Population growth therefore depends on immigration, which has meant the introduction of difference, not only ethnic or racial, but, above all, religious and cultural–Muslims, Sikhs, Buddhists, other Christian religions and sects, as well as atheists and agnostics. All in all, Quebecers have learned to co-exist with newcomers, finding reasonable accommodations that can allow citizens a degree of flexibility in living their faith. But there have also been some clashes. A government commission was struck in 2007 to look into “accommodation practices related to cultural differences,” chaired by the anthropologist-historian Gerard Bouchard and philosopher Charles Taylor. At times, the hearings at the Commission tended to become a bit of a road circus at which pure laine québécois (referring to Quebecers whose ancestry can be traced back to the original seventeenth-century French settlers) railed against newcomers who were threatening to change local customs and culture. What made these charges all the more absurd is that the complaints often came from rural town dwellers from the outlying regions of the province, where a Sikh ceremonial dagger or an Orthodox Jew’s skull-cap is seldom or never seen.

One notable exception. The Quebec Minister who introduced the bill, Bernard Drainville, has made it known that the neutral State will not favor any denominational group or permit religious symbols of any kind on government property with one notable exception: some Christian symbols will be allowed to remain, because they are perceived as part of the patrimoine culturel, or cultural heritage of Quebec. It is a paradox that this secular province still has a crucifix in the National Assembly (the provincial parliament), and that a huge cross on Mount Royal guards downtown Montreal. Such symbols would stay on as museum pieces to preserve Quebec’s historical past, but they would be deemed to have no religious meaning. Such a mindset helps us to understand why Quebec’s Catholics have Canada’s lowest rate of participation in the Church yet in the census identify as Catholics at a greater rate than anywhere else in the country. There is no guarantee that the bill will become law. In the past few weeks support for the project in the polls has fallen from close to 60 percent to under 50 percent. The Parti Québécois finds itself in a minority position and there is a good chance that the government will not last long enough to see the Charte passed. A number of protests in Montreal have signaled growing opposition to the Charter. Nevertheless, this saga has some important lessons for us.

The first of these is that the State cannot dictate a people’s identity nor can it legislate the way members of a society accommodate differences among themselves. It cannot tell someone that they will not wear a meaningful religious symbol because the wearer represents a “neutral” State, and that the symbol might offend someone else who practices a different or no religion. This whole affair has been in the works for a number of years. A small number of ideologues are trying to ram this project through but the problem is precisely that they begin from ideology and not from experience. For over 250 years, francophones and anglophones; Catholics, Protestants, and Jews; blacks and whites have co-existed–yes, with tensions and discord, but also in cooperation and friendship. Other groups have come in large numbers in the past 50 years.

If anything, our history has taught us that it is possible to welcome diversity and to dialogue with one’s neighbor, and not lose one’s identity. On the contrary, one’s identity is enriched by the experience. The State does not have to babysit society, or act like a doting mother, setting up rules so that Lise, Surjit, Fatima, and Mordechai can play together. It should be noted that the strongest opposition to the proposed legislation is to be found in Montreal, which is by far the main area where immigrants settle in the province and meet other Quebecers.

Nor can the State perceive its employees as merely an “incarnation” of the State. Yes, an employee is the face before us when we walk into a government office but that face has a name; that person is a human being and part of society and not just some robot of the State. Yes, a woman who wishes to be served or who works in a government office must show her face, but is the State to say that an employee cannot wear headgear that has meaning for him or her? The Royal Canadian Mounted Police has allowed its Sikh members to wear turbans for the past 20 years! Is the response to diversity, which is one of the touted values of Quebec society, to flatten difference and make everyone the same?

One of the dangers of this proposed legislation is where it might lead. How far does the government intend to go and what is its hidden aim? Does it ultimately want to target any religious presence in the province, which is the fear of some Catholic bishops? Is its goal eventually to remove the tax concessions enjoyed by churches, synagogues, mosques, and temples, including property taxes and deductions to those who donate to religious causes? Archbishop Pierre-André Fournier, the President of the Assembly of Quebec Bishops, has expressed openness to the idea of a secular State, but has also reminded the government that “society is pluralistic. On the spiritual and religious plane, people are free to believe or not believe... no official religion, but no official atheism, either.” He argues that such a closed approach to secularism as the government is demonstrating with this proposal might have the adverse consequence of isolating people evermore in cultural ghettos.

Be on guard. The government’s choice to eschew experience and to legislate dress codes for a so-called neutral State works against its citizens. After Camus’ judge-penitent tells us about Hitler’s efficiency in removing the Jews from Amsterdam, he admits that he struggles “against my natural inclination carrying me toward fraternizing. When I see a new face, something in me sounds the alarm. ‘Slow! Danger!’ Even when the attraction is strongest, I am on my guard.” This is the kind of mentality into which Quebec would push society. If anything, we need to be on guard against a State that, in the name of neutrality, would proselytize its citizens with all the passion of a convert.