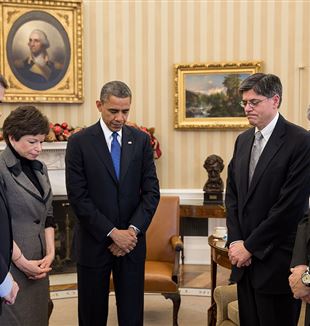 America remains different–sometimes gloriously so–not just from the rest of the English-speaking world, but also perhaps from the rest of what we still think of as the Christian West. Reading the transcript of President Obama's speech to the interfaith vigil held in Newtown, Connecticut, in the wake of the Sandy Hook shootings, I was visited yet again by a sense of the extraordinary difference the Atlantic makes in the culture of the English-speaking world.

Even in such an extremity of grief and necessity, it is all but impossible to imagine a British or Irish politician responding by quoting from Scripture, calling God's blessing upon 20 dead children, and speaking about the difficulty we sometimes have in discerning the nature of "God's heavenly plans." Even more, it is hard to imagine such concepts today being contextualized to the point whereby they seemed to relate to everyday reality–in a speech by the leader of any other Western democracy. It is likely that, at best, they might be there as garnishing, or perhaps vacant nods to tradition, while the main thrust of the speech would be directed at the political and social dimensions of such a catastrophe, and imply that the possibility for finding solutions to such matters was something entirely within the realm of men.

The most remarkable thing about Obama's speech was the subtlety of the way it merged an acknowledgment of evil as a dimension of human existence, while rejecting any acceptance of this situation as an option for politics. In a striking passage, he said: "All the world's religions–so many of them represented here today–start with a simple question: Why are we here? What gives our life meaning? What gives our acts purpose? We know our time on this Earth is fleeting. We know that we will each have our share of pleasure and pain; that even after we chase after some earthly goal, whether it is wealth or power or fame, or just simple comfort, we will, in some fashion, fall short of what we had hoped. We know that no matter how good our intentions, we will all stumble sometimes, in some way. We will make mistakes, we will experience hardships. And even when we're trying to do the right thing, we know that much of our time will be spent groping through the darkness, so often unable to discern God's heavenly plans."

But even more striking about this is that it was immediately preceded by the following: "In the coming weeks, I will use whatever power this office holds to engage my fellow citizens–from law enforcement to mental health professionals to parents and educators–in an effort aimed at preventing more tragedies like this. Because what choice do we have? We can't accept events like this as routine. Are we really prepared to say that we're powerless in the face of such carnage, that the politics are too hard? Are we prepared to say that such violence visited on our children year after year after year is somehow the price of our freedom?"

WE GROPE IN DARKNESS. In the sequence in which they appeared in the President's text, these two statements carry a great rhetorical power. This power derives from the implicit acknowledgement that man's efforts, including his political efforts, cannot be the full story. This is something rarely seen in the speech of a Western politician: a recognition of the facts of the human situation–of human weakness, the existence of evil, the reality of mankind's fallen nature, the dependence that defines our condition, and the limitations of politics as a means of definitively overcoming these stark facts of human life.

The speech was not by any means free of the dualism that governs the public life of the West. Although overall it hit precisely the appropriate notes of sorrow and comfort that we might expect from this President, there were these occasional ambiguities which served to underscore the difficulty of being a politician and straddling two ways of thinking. Like that sentence: "Are we prepared to say that such violence visited on our children year after year after year is somehow the price of our freedom?"

The implied political answer is: "Of course we are not." This is what we expect our politicians to tell us. This is what our ideologies prevail upon us to believe–that, somehow or another, man is on a path, paved by himself, toward solving and rectifying the imperfections of his condition.

Obama struck this note, in accordance with the expectations of the world, but then moved to make a different point: we stumble and grope in darkness.

The thing is, such events as occurred in Connecticut are indeed a consequence of man's freedom, if not exactly the "price" of it. In politics, we may speak of "price;" in life, we speak of facts and reality.
Always, when such catastrophic evils take place, both believers and skeptics alike emerge to ask a single question: How could a loving God allow this to happen? 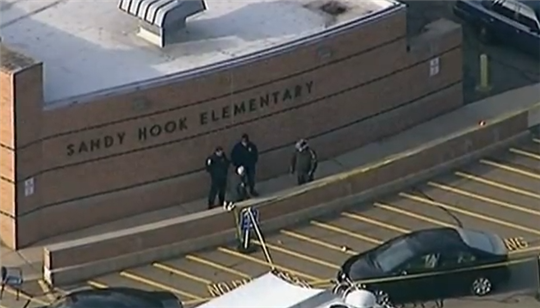 Implicit in this question is a strange contradiction: that the freedom of man can suddenly be withdrawn by man's Creator–if, for example, it threatens to go too far. But how would this be possible while freedom remained freedom? It is precisely in his capacity to sin, to do bad things, that man's freedom is defined. To say otherwise is to ask for an entirely different kind of reality, and nobody I have ever encountered has persuaded me that they have thought through the dimensions or dynamics of such a universe.

Within the conditions of the world we live in, the possibility of evil actions by men seems to me to pose no contradiction to the idea of a loving God. The problem is that, because we have turned away from God and embraced ourselves, we have contrived to forget that we are not the center of the universe. This is how we can so readily impose our own limited forms of reasoning upon our Creator.

GOD HAS ALREADY SPOKEN.The human dilemma which events like the Sandy Hook shootings point to, then, is this: man, having turned away from God, has forgotten he has done this and then contrived to construct a pseudo-world in which the recollection or even mention of this turning-away seems hazy and implausible. We continue to invoke God's name, but only in a reduced part of ourselves, and in relation to an abridged dimension of reality.

But man's nature always betrays his ambition. Adam Lanza was not some weirdo aberration, out of line with the normality of mankind. Rather, he was the expression of man's underlying nature, which is fallen and wicked and dark.

No politics or ideology of man can address this condition. Nor indeed can any act of the God we know through our human experience of Him. God is omnipotent, yes, but within reality as it actually is. If we demand that He change the terms of our existence because we do not like what we have become in denying Him, then we at least have a responsibility to imagine the other consequences of such a development, which embrace not just the extremities of human evil but also the terms of man's freedom.

No, God has already spoken. It is for man to hear. Only man, recognizing his error, can restore himself to harmony with the One who has created him, and thus cleanse himself of the evil that leads unavoidably to the next Sandy Hook.