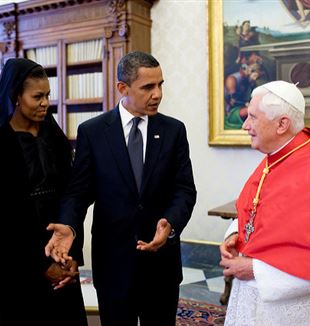 On January 20, 2012, the U.S. Department of Health and Human Services Secretary Kathleen Sebelius announced a mandate that requires all employers, including religiously affiliated organizations, to provide health insurance coverage for “the full range of the Institute of Medicine’s recommended preventive services, including all FDA-approved forms of contraception”–birth control, sterilizations, and abortifacients. While across the board there have been outspoken outcries regarding offenses against the First Amendment from news media, including those that are not always sympathetic to the Church (NY Times, Wall St. Journal, Washington Post, to name just a few), pundits applaud the “liberation” of healthcare in America. To help navigate our judgment of this controversy, Professor Paolo Carozza offers Traces some new insights. Carozza is Director of the Center for Civil and Human Rights at the University of Notre Dame. He brings to the table years of academic and international experience on human rights issues, including as President of the Inter-American Commission on Human Rights.

The Church asserts that it asks for religious freedom not so that it can protect its little corner but, ultimately, so that it can demonstrate “the special value of their doctrine in what concerns the organization of society and the inspiration of the whole of human activity” (Vatican II Declaration Dignitatis Humanae). Somehow, the “human” uproar across confessions and political sectors seems a confirmation (albeit inadvertent) of this.
Yes, clearly the controversy touched something deeply and broadly felt. To understand that reaction it is helpful to be clear about the basic structure of the HHS rule (a structure that is left entirely unchanged by President Obama’s proffered and as-yet unimplemented “compromise”). First, it says that anything that the government designates as necessary preventive health care services must be provided and paid for by employers–today it is voluntary sterilization, contraception, and post-conception chemical abortifacients; next week or next year it will be whatever else those holding the power of the government choose to add to the list. Second, it says that the only entities that can be exempted from these requirements for reasons of religious belief are those which predominantly employ and serve people of their own faith (for example, a parish church). Institutions such as schools and universities, hospitals, or charities that serve the poor and the oppressed are not deemed to be religious institutions in any meaningful sense, and so must conform to the government’s decree or else face prohibitive financial penalties.

This greatly curtails the freedom of these institutions and the people involved...
In other words, communities of religious believers are not free to form organizations that are intended to act and be present generally in the society (instead of merely acting internally to the membership of their own religious communities) without being commandeered by the State to serve the interests and values mandated by the government. In this absurd construction, we are not allowed to educate young people, heal the sick, clothe the naked, comfort the afflicted, seek justice for the oppressed, welcome the stranger, or feed the hungry, unless we are willing to do so in violation of our basic beliefs whenever the State instructs us to do so. Here, then, we can see what is truly at stake: the fundamental freedom of religious communities to act in the world–that is to say: to live in solidarity with others; to participate fully in realizing the common good of the whole community; and to give birth to a living culture. That is very far from just being a “Catholic thing”–it is, indeed, “what concerns the organization of society and the inspiration of the whole of human activity.”

Is it an exaggeration, then, to say that what is at stake is human freedom at its core?
What is at stake is the first and most fundamental aspect of human freedom: the freedom to seek and to adhere to the ultimate meaning of things, not just in the atomistic and subjective privacy of one’s mind or in one’s personal moral code or in pietistic acts of worship, but in one’s relationship with all of reality–family, work, education, art, politics, and so on. What is at stake is the freedom of religion to generate life and to be present as a cultural reality. This controversy is a useful reminder that the modern reduction of religious freedom to a protection from coercion in matters of subjective belief, worship, and “conscience” (in the narrow sense), reflects a reduction both of the integrity of the human person and of the inescapably communal and cultural dimensions of religion.

The broader meaning of religious freedom–with its deeply communal and “dependent” basis–is in competition with the prevailing idea of “rights.” In particular, the idea of rights seems to imply that the State has a duty to protect citizens from “coercive influences.” Thus, insofar as religious tenets are seen not only as idiosyncratic but also coercive, aren’t the rights recognized and protected by the State bound to come into increasing conflict with religion and religious liberty?
As a practical reality, I’m afraid that this conflict between religious freedom and certain conceptions and political practices of “human rights” is bound to increase. For example, one must not overlook the very close ideological connection between the current HHS controversy and the recent attempt by the Obama administration to deny any degree of constitutional protection to religious communities’ freedom to determine whom to employ. (See the U.S. Supreme Court’s unanimous decision rejecting the government’s position, in the case of Hosanna-Tabor Evangelical Lutheran Church v. EEOC, in January of this year.) That is why the root conflict implicit in the current controversy over health regulations is so important. Nevertheless, at a deeper level I am absolutely convinced that the idea of fundamental human rights is both compatible with an authentically human anthropology of communion and dependence, and also necessary to a just ordering of our social and political life. The problem is not in “rights” as such, but in a particular ideology of rights that tears the meaning of the individual human person from the richly woven fabric of human dignity and the common good, both of which spring up from a recognition of the human person’s transcendent destiny. Without this, the language of rights becomes just the plaything of power.

Does the conflict lie in defining what is meant by “the common good”?
Today, the common good is not something that needs “definition” in an abstract or conceptual sense so much as it needs to become an experience of a fact–the fact of our belonging to one another, the fact of our common needs, the fact of the objective and universal desires of the human heart. The recognition of the meaning of our material interdependence is foremost a question of education. We need to educate ourselves and our children, first of all, to the meaning of caritas, and to openness before the mystery and irreducibility of every human person. Of course, that just brings us full circle to where we started. The HHS mandate is insidious not just because it happens to contravene someone’s personal preferences in a pluralistic society, but because it strikes at the heart of our freedom to educate one another. The Church’s teaching on contraception and abortion, after all, is not just a collection of random and arbitrary moral precepts but a coherent judgment about the meaning and destiny of human life, a judgment that our life is given by Another.

Is the concept and practice of subsidiarity being crowded out of our political and social structure in the U.S.?
Nothing could be clearer in the current controversy than the disdain of those who establish health policy and laws for the freedom, flourishing, and integrity of the intermediary associations that stand between the individual and the State, those associations through which we discover our own humanity and that of our neighbors, and in which we learn the virtues of charity and self-sacrifice and tolerance. The intolerance of pluralism that these HHS regulations represent is stunning, and bitterly ironic in the context of a society that purports to elevate tolerance and diversity to the highest of public values. Still, it would be too easy and ultimately fruitless to look just at the “political and social structure” of our country for an answer. Subsidiarity is more than just a set of static and formal institutional arrangements; it represents a method for acting in the world, and a reasonable response to a dynamic human reality. If we don’t continue to give birth and sustenance to our culture, there will be nothing but a vacuum for the State to fill. Subsidiarity begins with us.