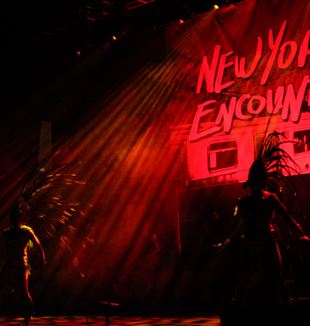 Having completed his presentation on the question, “What is Christianity?” to an audience of several hundred at the New York Encounter, the curtain fell and Fr. Julián Carrón turned around to find his way off the stage. He found his path immediately blocked by a camera crew from the TV channel of the Brooklyn Archdiocese.
After a few perfunctory questions, the crew asks Fr. Carrón a question that most modern-day professional philosophers will never deign to ask: “What is the relationship between faith and reason?” This being television, the answer had to be expressed in ten seconds or less. Fr. Carrón did not need that much time. He said, “It’s an encounter.”

Show, Don’t Tell. Fr. Carrón has a degree in theology from the Universidad Pontificia Comillas in Madrid, so he was perfectly capable of giving the type of textbook answer that would satisfy someone who is dissatisfied by the simple reply, “It’s an encounter.” But at that place and time a long answer would have been a moot point. The New York Encounter is meant to be a stage upon which the answer to the TV reporter’s question could be seen. Reason is what we use to understand the world. If faith is somehow reasonable, then it should help us to understand the world better–with visible results.

One way to look at the New York Encounter is as a showcase of those visible results. This is why there were, at the 2012 Encounter (January 13–15), events on politics (former Ambassador Mary Ann Glendon spoke about the vocation of politics), science (Massimo Roberto from Hubble’s Space Telescope Science Institute of Baltimore spoke about star formation), art (Jane Milosch, Smithsonian curator, discussed the painter William Congdon), education (New York Times columnist Ross Douthat, Wall Street Journal editor Matthew Kaminski, and Chris Bacich commented on secondary education and the meaning of life), and concerts of dance and music–in short, virtually every realm of human endeavor.

The Encounter is what happens when a group of people who experience life as Christians and pursue widely diverging interests and proclivities put their heads (and time, and strength) together, and launch a cultural festival. The cultural festival takes place in a building called the Manhattan Center near Penn Station on Martin Luther King Day weekend. It showcases films, exhibitions, panel discussions, and lectures. It is inspired by the Rimini Meeting, co-sponsored by Crossroads Cultural Center, and born out of the charism of Communion and Liberation.

These last few lines approach a question that the reporters did not have time to ask: Why put together an Encounter in the first place?

Test everything... The Encounter is possible only because of a series of smaller encounters, which happen in many places at different times around the world. Someone somewhere at some point in time and space met Ambassador Mary Ann Glendon, struck up a friendship, learned that she was writing a book about political vocation–The Forum and the Tower–and eventually asked her to give the keynote address of festival. The NYE does not count on the cultural cache of the Aspen Festival of Ideas or the money of the Venice Biennal, but even if it had both of those things, it would rely on the individual encounters between people and the actual, existing relationships that make exchange possible. “Encounter” is, through and through, part of the festival on every level.

But why do it? Angelo Sala, one of the founding members of both Crossroads Cultural Center and the New York Encounter, gave a speech in which he attempted to describe the reasons for doing what he does. The speech refers to Crossroads but–he tells us himself–it could be instantly applied to the NYE as well: “The main activity of Crossroads is the organization and promotion of public events on any topic that fascinates us. This was true at the beginning and it is still true today. It is a very important point for us: we choose our topics and speakers because of the way we’re struck by reality, not based on an ideology or a pre-determined agenda. When we started Crossroads, we had no intention of focusing on a predetermined subset of issues, people, or ideas that fall under the ‘Catholic’ label. On the contrary, for us, being a Catholic cultural center means to be interested in everything, in the entire spectrum of reality. It means to have the ability–or at least the desire–to encounter people from all walks of life, and to look for and give value to everything that is true, good, and worthy in various expressions of human life.” Here we can see, from another angle, how adequately the word “encounter” answers the TV reporter’s questions.

Apart from the network of friendships across the globe that bring us the topics, panel discussants, and presenters at the NYE, there is a core group of people in New York who work throughout the year to put it all together. Among them are a few volunteers who are young professionals in education, diplomacy, and business, who devote their extra time to the cause. 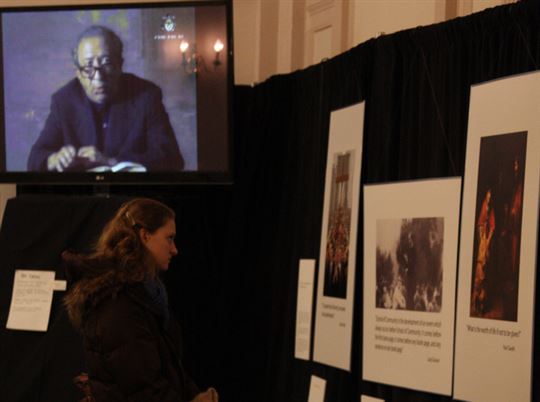 Tim Herrmann is one of them. Working as a lobbyist at the United Nations, he spends his days speaking with delegates from every corner of the world. He appreciates the aspiration and desire found in a place like the UN–a place, that is, which aspires to be universal, catholic, for all men and women in the world. He breathlessly tells this while also telling me that he would rather e-mail me a comment for this article instead of speaking to me directly. “I want to articulate certain things,” he says.

Later, he sends me this: “At the New York Encounter, we take a huge risk by laying our faith out bare to the entire American public. Not just to Catholics, but to everyone. Do we really have anything new to say? Do we have anything to learn? Is our voice relevant? All of these questions are answered every year for me at the NYE. And that’s why I help plan the event... For me, the NYE is that place where my faith gets tested and tried in the public arena and comes out with a bigger horizon than it had before, comes out even more capable of “knowing” the life I must live every day. It is a place where nothing is off limits and where my faith is allowed to ponder everything.”

“What brought him here?” The Encounter was not all about lectures and panel discussions, however. There was food and drink and, most importantly, music. A concert on the last evening of the Encounter–Sunday night–became the concluding spectacle of the festival. It was called “Pure American Juice” and it was a celebration of American musical traditions, from jazz to rock.

Saxophonist and composer “Blue” Lou Marini and songwriter and singer Vaneese Thomas headlined; they were backed up by a band who could play everything from blues to rock and roll. The program was MC’d by Joey Reynolds, host of the Joey Reynolds Show, and a member of the Rock and Roll Hall of Fame–a legendary disc jockey, his show was the highest-rated rock and roll program of all time.

Giacomo Maniscalco, a young businessman, waxed eloquent about his job: “Music is beautiful and, as with everything else in life, we shouldn’t be afraid of any part of it, any part of real music, which is an expression of beauty and desire. Working closely with a dear friend we decided to explore the major themes that lie at the core of the great history of American music and we tried to bring people who could play this music but most importantly people who could love this music onstage. That’s precisely what happened and what was so striking.”

There is a sense in which the New York Encounter could be said to take place primarily for its guests. Since “encounter” is seen not just as a chance meeting between persons, but as the unique event in which people come to know the world, then no encounter occurring during the weekend can be taken for granted. For me, the most memorable encounter was the half-hour interview I had with the legendary film director, Krzysztof Zanussi. He had come to the Encounter to speak on a panel commemorating Pope John Paul II, along with Monsignor Lorenzo Albacete and Archbishop Dairmuid Martin of Dublin, Ireland.

Zanussi had made a film–the first–about John Paul II in 1982. He is also a member of the Heroic Generation of European filmmakers of the ‘60s and ‘70s, and a close friend of cinematic masters Krzysztof Kieslowski and Andrei Tarkovsky. Sitting before him, I asked myself, “How is it that I am interviewing such an interesting person? What brought him here, alongside such a seemingly random group of people–Blue Lou Marini, Monsignor Albacete, and so many others?” He regaled me with stories about life under the yoke of Polish Communism, and about filmmaking and philosophy. What was going on?

Instead, I asked him, “What, after a lifetime of successful filmmaking and other adventures, are you still searching for?” He replied, “I get up every morning to meet beautiful people, and perhaps I have found some today.”