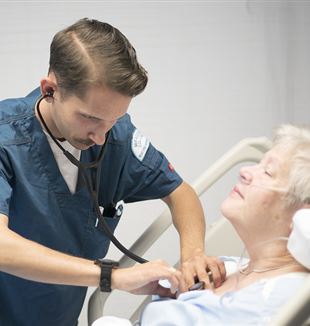 Drawn to his spirit of joy in treating the elderly and terminally ill–those “worthy of being honored and dignified”–a group of health care workers joined internist and geriatrician Dr. Anthony Lechich for dinner at the annual MedConference in October, to explore what is at the root of his indomitable hope for those with medical burdens too heavy for them to carry alone. His 17-year tenure at the 729-bed Terence Cardinal Cooke Health Care Center has included teaching medical students in neurology and geriatrics and developing special programs and educational modules for long-term disease and nursing home palliative care.

What inspired you to go into a medical career?
Two things in my early life catalyzed my interest. First, I had an uncle who, as a ship’s captain, was the only one the sailors could come to with medical problems since there was not a doctor on the ship. Even as a child, it struck me how desperately important it was for there to be a medical authority in that environment. Then, in 1956, I accompanied my father to Croatia on a visit to his sick mother–whom he had not seen in 33 years. When I was leaving, my school principal said to my parents, “He is going to learn more on this trip than he ever could at school.” In Croatia, my grandmother was close to dying of pneumonia so I asked about her medical care. They told me a doctor comes over once a week–and I realized that in the intervening 6 days she could easily die. The urgency of that situation set my mind toward the profession.

You graduated from SUNY Downstate Medical Center College of Medicine in 1970, during turbulent times...
In fact, that year we boycotted our final exams–I remember not being sure why we were so crazy and raging! The graduating physicians also boycotted standing for the Hippocratic Oath, but when the Oath was read, I was one of the only people who stood up, with everyone staring at me. For me, it was a sign of the great gift and privilege I was being given to practice medicine. People to this day remind me of this, and what an impression it made upon them.

Where was your first assignment?
I got into St. Vincent’s Hospital in downtown New York City, where I learned what charity is. The Sisters of Charity were amazing. In the emergency room, the Bowery “bums” would come in, with flies around their heads, and the nuns would take them into a little room on the side and close the door. And then sister would say, “Doctor, your patient is ready,” and I would go in to find this guy sitting there, clean, shaved, his hair combed... They would dignify the most beat-up “knights of the roads,” as we used to call them. The nuns presented this kind of charity and just expected the same from the doctors.

Now you are Medical Director and Senior V.P. for Medical Affairs at the Terence Cardinal Cooke Health Center. Did you know Cardinal Cooke?
When I was at St. Vincent’s, I also began moonlighting on Tuesday nights at a brand new nursing home run by nuns on 72nd Street. One night, one of the Carmelites was running around, and I asked, “Who’s dying?” “The Cardinal is here because his Aunt Maggie is a patient!” I went over to meet Cardinal Cooke while he shook the nuns’ hands. He told me, “It is so good that you are here for the old people. God works through your hands; you really are doing a wonderful service in being with the old people. Keep it up!” I remember him talking to his aunt, who was in her nineties, and he was so sweet, so pastoral. I had never seen such a light from a priest like him, in that position–as a Church authority, he could have been full of himself. Then he developed cancer, and he was in and out of St. Vincent’s and ended up dying too young, in his sixties. One of the Carmelite nuns I knew in that first nursing home was involved in his beatification and I, for 17 years, have been working at TCC which is named after him. I have devoted my entire career to the elderly–I don’t know if it was him or something else but he pushed me in that direction for sure.

What has driven your passion, sustained in this difficult work over so much time? You even know the names of all the hundreds of patients!
I know their names because I’ve been there for a long time and I realize how important it is to really get to know each one of the people in my hospital. I have been blessed with a lot of energy–I even run and play ball with the young people at lunch time sometimes. This strength at age 66 is fortunate because I do not intend to ever stop! I don’t like the word “retirement”–I never use it. I may do a different activity, but I will never stop. I love what I do, which is important. Steve Jobs said that in his Stanford Commencement Address: Pick a field that you would want to jump out of bed in the morning and do. Don’t worry about what they pay you; the rewards will come, just pick what you love.

What would you say your greatest passion is right now?
A relatively new passion is the quality of death in the nursing home. Nobody really loves death and people die quietly without care. Patients can slide away under the radar, maybe because the family wasn’t involved enough and the person went to the hospital at the last minute. So quality of death has become a passion, and it involves bringing them joy in relationships so they have something to hold onto while they are still alive, among fellow human beings. One of my idols is Dr. John Morley, a South African geriatric doctor who, in an award acceptance speech, said, “If they took everything away, the one thing I would ask them to allow me is to be at the entrance of a nursing home.” This is what resonates with me. I feel greatly privileged and it is among these people that I am happiest.

You value lives; you take care of people affected by terminal illnesses and diseases that naturally marginalize them in society.
I see them before me as human beings, worthy of our complete respect as such, worthy of being honored and dignified in their status or station whether they are out of their minds or something else. But still we have real ethical challenges, like that posed by our group of 50 extremely disabled adolescents (and some older) who are completely helpless, staring all day into space. The cost of keeping them alive is enormous; some need daily dialysis. I have estimated about 25 million dollars have been spent to keep those 50 kids alive in the time I have been at TCC. So it is very hard when you think about what those millions could do if they were used for people who then eventually could go on and help others. I have asked myself, “Why?” But, in the end, who can say who is more worthy than another to receive medical support?

What do you think of the medical compunction toward aggressive life support–doing it simply because we have the means?
I think it should be publicly examined. It could be that we need to defend some patients against the demands of their families. The families want to continue extending lifespan but they give the sick to us to take care of for the final years. The nursing home population is being reconstituted by all those who are outliving their prognoses. Yet, while there are more technical possibilities, the doctors are pulling back in their relationships with patients, and a lack of trust is creeping in.

The MedConference was born from a desire to take a cultural stand, to say medicine is about taking care of the person and affirming his or her dignity. What value do you see in this conference?
It has enormous value because it puts its finger right on the pulse of the problems. As Dr. Renzo Canetta said, “The physician has been distanced from the patient.” This conference pushes them back together a little–hopefully a lot. A very serious threat to the future is that technology is going to cause a lot of problems with human interactions. Look what’s happening: people are e-mailing, not even talking, and barriers are set up. But medicine is something intimate–the ultimate intimacy, which cannot be lived in any other way but a human way. Don’t give up on this kind of education and dialogue; what you are doing here is urgent.