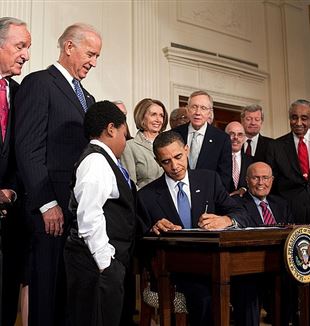 Over the past year, we heard political discourse and rhetoric trumpeting a clear sense of urgency for health care reform. Support for reform seemed to rise out of an awareness of real human needs and a moral imperative to take care of those most in need. There was much debate over those factors responsible for poor health care and those that have impeded access to quality health care for millions within U.S. borders: high costs of health care and health insurance, denial of coverage for pre-existing conditions, challenges to the relationship between health care providers and patients, the role of insurance companies, et cetera. The PPACA (Patient Protection and Affordable Care Act), signed into law on March 23, 2010, by President Barack Obama, addresses some of these factors and expands access to health insurance to millions of Americans. But is the PPACA really health care reform?

On the whole, the new law focuses on controlling those factors that have been responsible for high costs and limited access to health care by reforming health insurance. With its emphasis on health insurance, however, it is plain that what is most human in health care is lost in the PPACA.The law’s expansion of access to abortion is one evident symptom of this. In the face of human frailty, patients’ most basic need is for a relationship with a trustworthy presence–a caregiver–that will follow them and, if possible, help restore them to health. Respect for the dignity of a patient begins with this relationship. Without this most basic and human factor as its point of departure and measure, the PPACA is little protection for the dignity of human life when it is most vulnerable. In fact, it opened the door for serious violence to the dignity of and respect for human life at its earliest stages.

What happened to the awareness of real human needs touted this year in the public square? In the following commentary, Carter Snead (Professor of Law at Notre Dame University) offers a contribution to understand an aspect of this issue, describing how the political branches of the federal government, the legislative process, and the role of interests in this process influenced the formation and passage of the PPACA. He explains how the law sets new precedent, one that violates “basic principles of justice with respect to human beings at the beginning of life.”

The PPACA is a gargantuan piece of legislation. It is thousands of pages long. I suspect that no more than a handful of people in the world have actually read all of it. Certainly it is not the case that most of our representatives, senators, and President have read all of it. This is an interesting illustration of the “bureaucratization” of the legislative process. You have congressional staffs and consultants who came in to write this large piece of legislation in a modular way. It is never the case that someone steps back and looks at a bill of this size in its entirety to figure out what exactly it will do. The Speaker of the House, Nancy Pelosi, had an interesting and telling comment during the run-up to the enactment of the new law. She said, “But we have to pass the bill so that you can find out what’s in it.” No one really was able to say in a coherent and comprehensive way what the bill would do in its entirety.

One of the reasons that the legislative process is a modular process has to do with the size of the congressional staffs. But there are also a number of people who have incentives to get involved in this process. This includes lobbyists, the health insurance industry, and the like. Anyone who thinks that any piece of legislation is rooted in an altruistic desire on the part of the drafters to address a social problem on its own merits and to find the most effective and efficient solution is naïve. The people at the table drafting this bill were lobbyists, ex-lobbyists, or people who will be lobbyists soon–people who had very vested financial interests in the way this bill turned out. You can see this in the reactions of a number of interest groups in the wake of the bill’s passage. The insurance industry is very pleased by what happened because the law mandates that everyone purchase health insurance and provides subsidies from the federal government for insurance. This supplies a customer base for the insurance companies, along with subsidies. The people who have the most influence in the government–the federal government of the United States and other places as well–are people who can afford to put together well-organized lobbying campaigns. And there is a sort of “revolving door” between private industry and working on the staffs of these Congress people that prevents any kind of real compromise and on-the-merits decision making. The questions of what health is, of whether it is a human right, of who has access to health care, and of what the moral obligations of a government are to ensure access to quality health care for its citizens, are all questions that probably did not play much of a roll in the drafting of this bill.

A new precedent. One thing that it is perfectly clear that the law will do is increase access to abortions across the country. The way it will do this is by subsidizing health care plans that provide for abortions. This was a huge debate during the run-up. There was this question about whether or not the long-standing practice of the federal government not to fund or subsidize health care plans or health care programs that include abortion coverage should be included in the bill.

There was a lot of discussion about the Hyde Amendment that was enacted in the 1970s and restricted federal funds from flowing to programs that promote or subsidize abortion. The Hyde Amendment is an appropriations rider–a restriction on funding that has to be reauthorized every year–that is attached to the funding bill for the Department of Health and Human Services through which all these funds flow. Because the new health care reform bill would create an entirely new stream of funding, it was a blank slate regarding restrictions to the funding. There were some in Congress who argued that the Hyde Amendment should be established for this new funding stream as well to prevent the federal funding of abortion. I think a number of the abortion rights advocates in Congress and outside of Congress saw this as an opportunity to undo what they regarded as the problem of the Hyde Amendment, which is to say that, in their minds, it was a form of discrimination against poor women who could not afford to pay for abortions. They thought that the government had the obligation to pay for those abortions that the Hyde Amendment prevented.

The Stupak failure. The Hyde Amendment also prevented the subsidizing of any health care plans that were purchased in the program of health care coverage for federal employees. Eight million federal employees participated in this program, this constellation of insurance plans. Insurance companies participated, but none of them were authorized to provide access to abortion. We had an entire system, a precedent, namely that federal employees’ health benefits programs, where there were widespread subsidies for health care coverage, did not include abortion coverage. There was clearly a precedent for that kind of approach and many people in Congress argued for that approach to the new streams of funding.

Bart Stupak from Michigan was one of the most high profile supporters of the proposition that abortion should not be funded. He had his Stupak Amendment which passed on a bipartisan basis in the House. And then of course the bill went to the Senate where the version of the bill was passed without the Stupak Amendment.We then saw this famous capitulation by Representative Stupak where he dropped his support for the Stupak Amendment as enacted in the House to be attached to the final bill. The House then agreed to pass the Senate version of the bill, which not only omitted the Stupak Amendment, but was also less progressive than the House version and less aggressive in coverage. The Senate bill was simultaneously less generous and less pro-life. The House and Senate agreed to language that allowed the government to subsidize abortion coverage so long as there is–and to my mind a very superficial and not very meaningful–accounting mechanism where everyone who buys into these plans (even if you do not want an abortion) has to pay a surcharge to cover the costs of abortions that are subsidized by the government.This raises a conscience question: Do individuals have to pay directly for the abortions when they buy into a plan? It is a serious matter. But I think the more serious question is the increased access to abortion that will come from the government’s subsidizing of plans that provide abortions. This is a new precedent, and it is the most disturbing thing to me personally about the new law. It is a real expansion of access to abortion.

A way forward. How do you maximize access to quality health care for the people most in need? That is where I would start. Quickly, you come to the second question: Why is it the case that many people are receiving deficient levels of health care right now? We have a moral imperative to take care of the people most in need, and this obviously includes health care access. The second piece of the puzzle is: What is the problem, what is obstructing that right now? Access to health care is crucially important. We have to get to the root problems of why access is difficult to achieve, and of course we have to have this side-constraint of respect for the dignity and equality of every human life and not adopt a policy that promotes the use and destruction of human life in any stage of development. The first thing that needs to be done is to change those provisions of the law that do violence to the equality and dignity of every human life. The first order of business, as far as I’m concerned, is not just to improve the law’s defects as a way of maximizing access to health care, but to undo what the law does in terms of violating basic principles of justice with respect to human beings at the beginning of life.