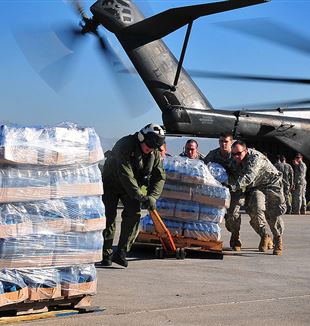 In spite of their current serious economic problems at home, the American people have responded to the devastating earthquakes in Haiti with stunning generosity. Their own economic needs have not stopped ordinary Americans from donating millions and millions of dollars for relief efforts there following the disaster that struck Haiti on January 12th. The money has come from every quarter, from ordinary individuals to the most famous celebrities; from official charitable agencies to big corporations. The outpouring of compassion expressed in terms of dollars has been staggering from the very beginnings of the organized relief efforts until today.

For example, as early as January 18th, Larry King, a popular American television talk-show host, recruited a group of well-known celebrities for a two-hour televised fundraiser. Celebrities like Jennifer Lopez, Ringo Starr, Mick Jagger, Susan Sarandon, Paula Abdul, Shawn “Diddy” Combs, Colin Powell, and Queen Rania of Jordan appeared on Larry King’s show informing Americans where to make their contributions. In 30 minutes, $700,000 was raised for UNICEF and the American Red Cross and, by the end of the show, nearly $5 million had been raised. Other similar efforts soon followed and Americans continue their contributions to this day, even though the Haiti disaster is no longer the top news story of the hour.

At a recent Sunday Mass at St. Patrick’s Catheral, New York’s Archbishop Timothy Dolan told the story of the eighth-grade students at a Catholic school in the Archdiocese who decided to contribute to the Catholic Charities’ campaign for Haiti with the money they would have spent on soft drinks and candy during the special “coffee break” to which they are entitled as the grade school’s graduating class.

The generosity of ordinary Americans is especially impressive since many have lost their jobs and homes in the current economic crisis. Nonetheless, because so many, like these eighth-grade students, have decided to donate even small amounts, the total contributions have been huge.

Out of nothing. In this context, the question has been asked: how is this generosity related to the Charity we are discussing in the current School of Community? Is this generosity the same as the virtue of charity understood by the Church and, if not, how are they different? 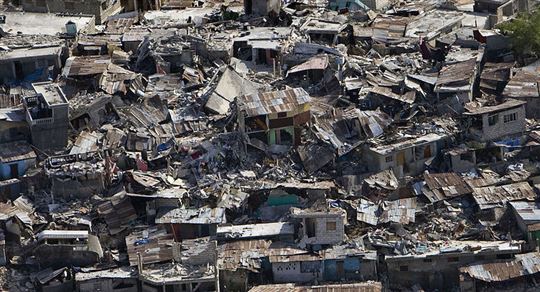 At the beginning of his book Credo for Today (Ignatius Press, 2009), Pope Benedict XVI discusses the question of what it means to be a Christian. Who is a true Christian? Jesus Himself answers this question for us in His parable about the Last Judgment regarding who will be saved and who will not. Only one thing is required, Jesus says, and that is Love–that is, charity. “Whoever loves is a Christian,” concludes Pope Benedict. There is nothing more to add or say.

True, we are saved through faith, but what is faith if not the recognition of Christ as the incarnate revelation that God is Love (Deus Caritas Est), that very Love upon which every second of our existence depends?

But who among us could honestly say that all of his or her actions are motivated by a Love that corresponds totally to the charity that creates us out of nothing, the charity that God is? Indeed, who can possibly live this way, as our School of Community asks?

Pope Benedict replies, “It is at this point that faith begins. For what faith basically means is just that this shortfall that we all have in our own love is made up by the surplus of Jesus Christ’s love acting on our behalf. He simply tells us that God Himself has poured out among us a superabundance of His love and has thus made up in advance all our deficiency. Ultimately, faith means nothing other than admitting that we have this kind of shortfall: it means opening our hands and accepting a gift. In its simplest and innermost form, faith is nothing but reaching that point in which we recognize that we, too, need to be given something. Faith is thus that stage in love which really distinguishes it as love; it consists in overcoming the complacency and self-satisfaction of the person who says, ‘I have done everything. I don’t need any further help.’ It is only in ‘faith’ like this that selfishness, the real opposite of love, comes to an end. To that extent, faith is already present in and with true loving; it simply represents the impulse in love which leads to its finding its true self; the openness of someone who does not insist on his own capabilities, but is aware of receiving something as a gift and of standing in need of it.”

This opening of our hands to receive the gift of love that we need to love others is “a grasping at nothing unless there is a someone who can fill our hands with the grace of forgiveness. And then once again would have to end in idle waste, in meaninglessness, if the answer to this, namely, Christ, did not exist. Thus true loving necessarily passes into the gesture of faith, and in that gesture lies a demand for the mystery of Christ–a reaching out toward it–and that mystery, when it unfolds, is a necessary development of that basic gesture; to reject it would be to reject both faith and love.”

On the journey. This path outlined by Pope Benedict coincides perfectly with that proposed by Fr. Giussani in the School of Community, and by Fr. Julián Carrón in his efforts to lead us along this path. And this is the point: the life of charity is a path, a journey that we freely choose to undertake. Generosity can indicate a point in that path to charity, but if we do not choose to continue along the path, generosity will prove to be an exercise in futility. The key to the authenticity of this journey to Love is Jesus Christ. It is in Him that generosity is transformed into charity.

Recognition of the gift that is Christ (faith) takes place in the heart of each one of us. It is within us that generosity passes into charity, and the first recipient of this charity is each one of us. First of all, we must learn how to be generous toward ourselves. It is as a fruit of this personal experience of the mystery of Christ that our generosity toward others becomes a witnessing to the Love that God is.

The beautiful generosity of the American people therefore does not mean that Americans are better than others. What it can mean is that the fruits of faith in Christ have not disappeared from this land. If they do, this generosity will become for a while an escape from our inner cynicism or despair, and eventually it will disappear altogether.