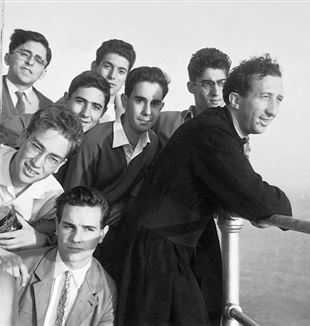 Forty years ago, in November 1969, from the ashes of the youth group Gioventù Studentesca (GS, Student Youth), Communion and Liberation was born. Much had already happened; the “Movement” around Fr. Giussani had begun immediately, the first day in 1954 when he climbed “the steps of the Berchet High School” (where he was called to teach), as he used to say. But the definitive name was not there yet, and the birth of a name is the flourishing–perhaps still instinctive, unreflected, but real–of a new awareness. The term “Communion and Liberation” was not invented by Fr. Giussani, and this says much about his method. The first to use it, as Fr. Massimo Camisasca says at the beginning of the second volume of his history of the Movement, CL–The Rebirth (1969-1976), was Pier Alberto Bertazzi, then a medical student and leader of the GS university students who had survived the political and existential earthquake of that dramatic year made up of demonstrations, violence, and political turmoil.

Bertazzi and Sante Bagnoli were leading a group of 50 or so students who were trying to follow Fr. Giussani, “though without much clarity,” Camisasca notes. They would meet in via della Signora in Milan, near the State University, which was the headquarters of the student movement (a leftist organization born in many Italian universities).That autumn, they printed a leaflet and gave it the title, “Communion and Liberation.”

Giussani realized at once that there was something new in the air. According to Camisasca, the following May, during the School of Community, he twice took up that name and made it his own, immediately expressing a clear judgment, almost incredible if we read it today: “Communion and Liberation–this is the title of our task,” he said. He considered it “the most precise formula” from the operative (not the theoretical!) point of view, and said at once that it was valid not only in the university reality, “but for any type of action.” At a meeting in October 1970–less than a year after Bertazzi had produced the leaflet–Giussani was already saying that Communion and Liberation was “really the definitive formula of our being present in the world.”

Forty years later, the Movement–spread throughout the world and in the lives of many through the name Communion and Liberation–has made a difference in cultural outlook and awareness, as well as concrete experience. Five Americans from different walks of life take up the challenge of relating the reverberation of CL in America today, the vibrations of a revolution sparked by Father Giussani so many years ago in Italy.

Amy Welborn (Commentator and author of books on prayer, apologetics, and Church history.) I first heard of Communion and Liberation early in the papacy of Benedict XVI, as I was learning more about him as a churchman and theologian. I did not know much about him beyond his reputation as a theologian and his contributions to Pope John Paul II’s papacy.  I was fascinated to learn of his interest in Communion and Liberation, even that he was involved in a School of Community, and it intrigued me enough to learn more. Since Pope Benedict had a long-time interest in the Movement, my initial impressions were that it must be a movement of intellectual depth and seriousness as well as one with the Gospel at its heart. In the years since, I’ve followed Communion and Liberation with great interest and have read more of Father Giussani’s writings. My initial impressions have been affirmed, and I’ve also come to value what I read coming out of the Movement for what it has to say about the identity of the Church and the relationship between Church and culture. I’m struck by what seems to me to be an invaluable grounding in the truth of the Gospel, the reality of Jesus Christ, and a realism about the world, culture, and contemporary life and that most valuable willingness and passion for engaging the latter with the former.  My general impression of CL is of a charism moving out, moving forward, not closed in on itself or primarily concerned with its own identity, and most supportive of the arts and artists, which is very important to me.

Michael Sean Winters (Author and political columnist for America and The Catholic World.) Communion and Liberation has come to mean something very specific to my mind. It means the kitchen table at my friends and colleagues Marco and Letizia Bardazzi’s house. We share a wonderful mutual friend who stays with them when he comes to town, and so I have found myself at their table at breakfast time having an espresso and late at night having a glass of wine. No matter what libation we are consuming into our stomachs, the libation I am consuming into my soul is always the same: the new wine that is poured into new wineskins. Hospitality is a great and evangelical gift. I am always grateful when I am offered bread and wine. But, at the table of these friends, the bread and wine become something more than bread and wine. The communion of friendship is a foretaste of the communion of faith at Mass which is, in turn, a foretaste of the divine communion we anticipate and to which our hearts turn us. Indeed, espresso and a doughnut become more than merely espresso and a doughnut only if that foretaste of the divine communion is acknowledged and shared. Because we look past the horizon, we can see our own kitchen tables differently. We learn to live differently. When we experience communion, everything is made new. In America, notions of freedom are inevitably tied up with ideas of independence and individualism, rugged or otherwise. But, in CL, freedom is seen as the product of relationships. Communion liberates. And liberation invites, not requires, communion. The idea is not exactly counter-cultural because we do not leave our culture to discover it and, in any event, we must love our culture if we are to evangelize it. Indeed, the idea is not really an idea–it is an experience. And, for me, it is an experience that I will always associate with Marco and Letizia’s kitchen table.

Stanley Hauerwas (Gilbert T. Rowe Professor of Theological Ethics at Duke University, with a joint appointment at Duke’s School of Law.)  “Communion and Liberation” brings together the concepts that are a deep challenge to American culture. The name suggests that liberation comes through communion. Communion names not only our relation to one another but also our relation to God. So communion is the precondition for freedom. This reality confronts the American presumption that we must first be made free in order to choose who we might be. This is why loneliness is such a determinative reality in American life. In contrast, the “Communion and Liberation” Movement works on the presumption that friendship is the necessary condition for the discovery of the goods that make us free.  One of the most remarkable things I have observed at Rimini [at the colossal cultural event, the Meeting for Friendship Among Peoples run by CL] is the extraordinary sense of solidarity. The young people who make that meeting possible feel for one another. They feel a solidarity because they are sure they’ve been given good work to do. “Communion and Liberation” names the work of worshipping God through which we are made friends of God and one another–the result being that we discover we are not alone in the world. If I’m right about what I have seen at Rimini, and what the name “Communion and Liberation” means, then the Movement represents a profound challenge to American culture… because success is not what “Communion and Liberation” as I understand it is about. Rather, what “Communion and Liberation” seeks is to be a faithful witness to the God who has made this movement a reality. So there is no reason to despair, given the wonderful work this movement represents.


David Jones (Major in the United States Army.)  CL coincides even more with the reality I’m living. I am now stationed with the 1st Infantry Division at Fort Riley, Kansas. Prior to deploying to the war-zone in Iraq, I had a conversation with a friend in the Movement, Sal.  He recommended that I develop friendships with fellow Catholic soldiers who would help me live my life while in combat. He said if the charism didn’t help me to live my life as a soldier than I should discard it.  I listened to his advice and I thank God for doing so.  Living through the experience of war and dealing with the wounded and killed in action can drive men literally mad.  While deployed , my best friend, my wife, had a life-threatening injury, and the total inability to return home to take care of her during this period drove me to my knees as a man. I felt like curling up in the fetal position and lying in my bed, not moving. My friend, Msgr. Albacete, said to me, “David, you are mysteriously being allowed to participate in the life of Our Lady in this experience.” That insight of contemplating the Passion of Our Lord and Our Lady’s participation in it along with the ability to lean on my friends in Iraq got me through that experience.  I am a better man now because of it but only through the grace of God and through the friendships He provided did I survive it.

Chris Bacich (High school history teacher and CL National Responsible.) As so beautifully expressed in Gaudium et Spes 22, Vatican II proclaimed that “only in the mystery of the incarnate Word does the mystery of man take on light.”  Christ Himself said, “The one who sins is a slave to sin.”  In other words, the one who follows anything other than Christ ends up in a life full of obscurity, confusion, and emptiness.  Christ offers the liberation from this slavery by means of communion with Him within the friendship of those who affirm Him. Throughout the United States–in families, within the lives of young adults, among students in high school and colleges, in the lives of priests and consecrated lay people, as well as in the vigor of the elderly–I have the privilege to witness this liberation in action.  Such an event bears great hope for this nation and the world, since that culture which so often increases the confusion and suffering in people’s lives and which has one of its important origins in our nation reveals its weakness in front of the power of Christ’s love.  Communion and liberation is happening in the United States; in other words, Christ continues to set His people free.