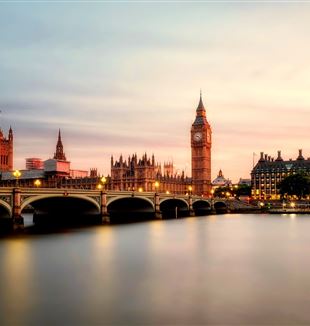 No golf this Sunday. Marco and Noel’s weekly game has been called off, and not because it’s raining today in London, nor because last week Marco, a Milanese surgeon who came here in 2004 for work, finally beat his friend, a young English lawyer (“Two years of attempts, but in the end I finally did it!”). No, it’s because today the CL community is gathering for an assembly on hope.

At 2:30 pm in the hall of Ealing Abbey in the western periphery of London, about a hundred people have gathered: mothers and fathers of families, a few students, and a lot of young workers. There are three strollers parked in back. Marco, who has been guiding the community for two years, and Roger, who is responsible for the Fraternity, are leading. The number of people here seems insignificant, in a metropolis of 12 million, where Catholics barely account for 10% of the population, but it’s not insignificant at all. Just look at what a casual encounter of two young people in a London parish more than 20 years ago has generated: the community now includes 200 people throughout the island, a 15-member choir, 3 Schools of Community in the capital, and 16 others throughout England and Scotland, with charitable work (some give a warm meal to the homeless, others bring Communion to the sick), a Way of the Cross through the streets of the city, vacations together…

Beyond the finish line. In 1982, Heraldo, a young college graduate, met a GS member at Mass who’d come from Italy to study English. He heard about the Movement from him and was curious to learn more. The two became friends and helped out with music in the parish. A few months later, Anna Maria, a Memores Domini member who had just arrived for work, entered the church by chance and saw the song booklets the two friends had prepared. She asked the parish priest about it and was introduced to Heraldo. These simple encounters lead to all the rest. In those years, the Movement was arriving in other cities as well. Ana Lydia from Brazil came to Cambridge for her doctorate; Gianmaria, a recent graduate in Economics, came from Milan to York. The London community grew at the end of the 1980s, with the arrival of young people who had met the Movement in York and Cambridge. “But a bit more was needed for the CL community to take root,” recounts Amos, one of the first to arrive from York in that period. “In the early 1990s some new families were formed and some Fraternity groups were established, and then in 1994 the Memores Domini house was opened.” Amos, who develops mathematical models for weather forecasting, is now among the nine members of that household.

Today as well, “so many come and go,” explains Marco, “for work or studies, maybe for just two or three months. But, because of the value of this companionship, every person is given to you for eternity.” With just a quick look around at the assembly, you realize that it’s a true melting pot. There are people from Japan and Brazil, Greece and Lebanon, France and Iraq, and their stories vary widely. Fr. Christopher was Mormon, then Anglican, finally coming to the Catholic Church when the Anglicans permitted the ordination of women. Today he’s the chaplain of the London community. Juliet moved to Breznev’s USSR when she was 14 with her father, a naval officer at the English Embassy in Moscow. Won over by the greatness of the Russian people, she decided to learn the language and sought work in Moscow as a journalist. “I wanted to find the mysterious ‘X’ that united me to those people, so I immersed myself totally in that world, cutting off my roots.” But then she understood that “in this way, I no longer had an identity.” With the collapse of Communism, Juliet returned to England with the question, “Who am I, really?” In the 1990s she met this companionship. “I saw people who were very different from each other but, at the same time, friends.” Here, finally, was “that Something that can unite people.” Juliet decided not to abandon it. “In this friendship, I’m beginning to live with an intensity I never would have thought possible, with my husband and our three children, in the tasks of everyday life, in every instant.”

Others, like Richard, have stories that may be less adventurous, but not any less significant. From an Anglican background, he converted to Catholicism in 2001, but at that point he understood that he hadn’t reached the finish line. “I asked myself, ‘Is this all?’ The journey couldn’t just end there.” A few months later, he encountered the Movement. “Today, this companionship educates me to enter into things more deeply, without ever stopping.” So much so that, although he holds a position of prestige at one of the biggest banks in the world, he realizes, “At 41, I have so much to learn.” Looking at one of his typical days (“meetings, mail, more meetings, from 9 am to 8 pm”), you’d think he was one of those singles married to their jobs. Instead, he’s here with his wife, Patricia, and their four children (the oldest, Casimir, is six) running around them. During the assembly, they played in a room with 20 other children. Marco recounts, “We regretted that they were bored, so we thought, why don’t we make a proposal to them, as well?” Thus was born the Narnia Club: a series of “lessons on beautiful things” before the meetings. One time, Juliet read some passages from the Chronicles of Narnia; another time, Emilia, an art lover, did a slideshow of her favorite art works; Roger, an astrophysicist, talked about the stars; and, another time, Joe, a music teacher, talked about Peer Gynt. “If, instead of parking them in another room, you make a proposal, they say yes.” This was seen in their last vacation, in Torquay on the Channel. (This year they’ll spend July 25–31 in Caernarfon, northern Wales.) There, the evening schedule was three songs for everyone, then bedtime for the children. “Instead, you should’ve seen them,” says Alessandro, who works in IT for a multinational. “They didn’t want to go. When we explained the songs, you could hear a pin drop–they were the ones to teach us how to stay before what happens.”

Eight friends with the Cardinal. A great step forward for the community was the encounter with Cardinal Cormac Murphy-O’Connor, the Archbishop of Westminster, replaced in May by Archbishop Vincent Nichols. Valeria, Marco’s wife, stopped him during a pastoral visit to their parish and introduced herself. He expressed his desire to know them better. When eight of them went to the meeting with him, “The first thing he did was to ask each of us why we were in CL,” recounts Amos. “Experiencing his paternity, we all felt united, and understood the value of our companionship as part of the local Church. So, we invited him to present the first volume of Is It Possible to Live This Way?. November 27th, in Westminster Cathedral Hall, he gave the presentation with Fr. Julián Carrón at his side. And now? “We met Msgr. Nicolas on July 2,” recounts Marco, “and our encounter was anything but formal. He showered us with questions about the Movement, and asked me, ‘How does it help you be a surgeon?’” That evening, in the same hall, Fr. Carrón presented the second volume together with Msgr. Mark O’Toole, Rector of the Westminster Seminary. “We had met him when he was secretary of Cardinal Murphy-O’Connor. I’ll never forget one of the first things he told me: ‘You’re a golden thread within the Church.’”

Mariam’s Hair
Facts that happen, people who are reborn...  One of the most recent examples of this is Noel, Mark’s golfing partner. The 31-year-old works in the government offices on the banks of the Thames, and is the English point-person for the 2,000 members of the Youth 2000 Catholic movement, for young people up to age 35. “For many, this experience was the beginning of a Christian journey.” However, this alone was not enough for Noel. When he went to the World Youth Day in Cologne in 2005, he met a young man from CL and decided to learn more. A month after his return to London, he went to his first School of Community. “I was struck by the way those young people discussed their work. They weren’t like the boss’s slaves; they were trying to understand the meaning of their work experiences. It was the education I was looking for. Today, School of Community is first of all a help for me: it challenges me to live things deep down, and I can go into my office without counting the hours until Friday, like the others.” So much so that Noel, who, together with Gianluca (Associate Professor of Real Estate Finance in Reading), leads one of the three Schools of Community, has asked to become a member of the Fraternity of Communion and Liberation. He explains, “For me, it’s a natural step, a public acknowledgment of what sustains my life, so I can be more serious before others and, above all, before the two thousand young people who follow me. How can I do that, if I myself don’t have anyone to look at?”

To Look At
“Before all these facts, we can only stay there in front of them,” says Amos, “like the Apostles with the Risen Jesus–they didn’t do anything else.” Though she wasn’t yet able to give it a name, this is the experience of 18-year-old Mariam, Marco’s Muslim neighbor. “Two years ago, in high school, she met some GS students from Milan,” recounts Marco. “After their return to Italy, she remained close to us. You could see that she was curious. Last week, she asked me, “Is it really true that there’s someone who knows the number of hairs on my head? How can you say so?” “I can assure you that it is so,” I told her, “because of a series of things that happened to me.” She responded, “If you’ve found such a treasure, you can’t keep it to yourselves. I want to know it too.” No sooner said than done... Next Friday, at School of Community in Marco’s living room, there will be an extra chair.