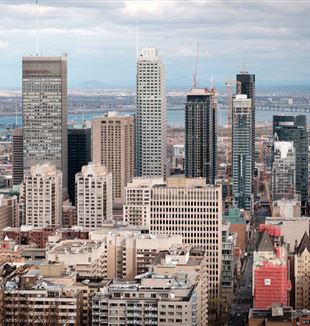 All these years of our marriage, I have been sustained by the words Fr Gius said to us when we married: “The honor of your choice is not in having chosen marriage rather than another vocation, because vocation is always given by God; it is always God who chooses. The honor of this choice of yours lies in the fact that you haven’t reduced the sign to a merely natural level. You have accepted that this vocation coincides with the construction of the Church, which is the glory of Christ in the world.”

Before marrying–eighteen years ago–I spent two years in Moscow, teaching in the Italian school. Even though I was not part of the Gruppo Adulto [“Adult Group,” lay people dedicated, in joining Memores Domini, to service of the Church through celibate life in CL], I ended up living with a woman from Memores Domini. We lived together very silently for two years, because there was still Communism, and we couldn’t express our belonging visibly. Slowly, slowly, living with this woman, I came to understand that affirming and acknowledging the presence of Christ–manifested to me through her and other people–could sustain all my desire and could realize the fecundity that I desired.

Then, I met John. The prospect of going to live in Canada, where there wasn’t a CL community yet, made me somewhat afraid, because I understood that my marriage as well would need to be sustained and helped, that it would have to be part of a broader sphere. The experience I had lived in Moscow with Elena had made me certain of the fact that, then, through her face, and now, through John’s, I would be able to begin to recognize Christ, to desire to meet other people. In short, this was the possibility for me to be happy.

Almost immediately, through grace, many friends were given to us. Our children came along, and this opening out of our unity also increased the impetus to meet and invite other people, to open the doors of our home.

In effect, John invited people over at all hours, without thinking twice, and a lot of times I was tempted to put on the brakes. I said to myself, “I don’t have a handle on anything around here any more–what time the kids go to bed, who has to go to school, who has to do homework, etc…” Notwithstanding my doubts and resistance, I realized that our friends were slowly but surely becoming truly friends of our children as well, and that our companionship was becoming really a place that educated them, that gave them a big dimension. So we continued to open our doors and we continued to meet all kinds, from the editor of Montreal’s daily newspaper to people who were pretty much a wreck from the psychological point of view–everybody. In this regard, I wanted to tell you an anecdote about a bishop who was at the International Assembly with us.

Carras had met Bishop Wingle when he was bishop in Nova Scotia, a beautiful place on the Atlantic. John told me, in May or June, “This year, I haven’t had time to go see him because I’ve had too many commitments. Let’s go with all four kids and have a vacation at his house.” I was a bit perplexed, because I thought it wasn’t possible, it would be too hard to keep the kids in line so we could talk in peace, etc… Instead, when we arrived, after eighteen hours by car and ferry, there was Bishop Wingle, ready with a water gun to play with our kids…

Another place for encounters has been our children’s school. They go to a French school, since Canada is bilingual, and there I met many mothers who I invited and with whom I became friends. In effect, none of them subsequently became involved in the Movement, even though we invited them. I realized that being their friend, being close to them, was a truly gratuitous gesture, because in North America there’s strong pressure on the mothers to be perfect. Sooner or later, they can’t keep it up and, even though they couldn’t be involved in our friendship, they realized that there was something mysterious in our companionship that we offered them, such that even today many of them want their children to be in the company of our children.