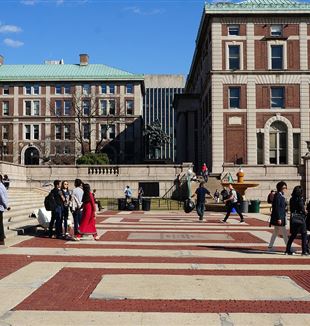 I’m writing you quickly about the public meeting held at Columbia University last February 3rd. This initiative had a running start because the Columbia chaplain holds Monsignor Albacete in great esteem. The chaplain is a Polish Augustinian monk, a friend of Neuhaus, whom he invites every Sunday to celebrate Mass on campus. Neuhaus respects CL and Albacete. So at Columbia not only are we welcomed, but desired (at least in the Catholic “microenvironment”).

A conversation with Father Jacek (the chaplain) a few weeks ago evolved into the idea of inviting Albacete to the campus to present Why the Church? At Columbia we in CLU (CL university students) number two plus two. Carlo (Engineering, second year) and Maria (Politial Science, first year, from Romania with a full scholarship), plus me (MD fellow) and Davide (NBA, from the Bocconi University in Italy). We prepared a flyer–when, where, what, who Albacete is, what CL is. No pretty quotes, nothing else. American pragmatism. Carlo made the announcement last Sunday at the campus Mass, and Neuhaus (who had preached) added, “If you don’t know who Monsignor Albacete is, you shouldn’t miss the occasion to hear him speak.” Tuesday evening at 7:30 the meeting took place on the Columbia campus. The room was full, with close to 40 students. It wasn’t the presentation of a book, but an explicit invitation to speak about our company. Albacete concluded his presentation saying that in order to verify the proposal that the Church makes today to man, a book is not enough; you need a living company, and the most reasonable thing that he could tell them (the listeners) today, at Columbia University, would be to throw themselves into the experience of CLU. Then Carlo, who led the meeting, gave a concrete face to this proposal. I was really struck because something like this in an Italian university would be called “propaganda” (by the left) and “passive aggression of religious consciences” (by those of FUCI–Italian Catholic Federation of University Students). Here, instead, the announcement of an experience doesn’t have to be combined with any political or ideological care to be worthy of being taken seriously.

The chaplain was happy. “Finally, someone who is doing something at the University. I’ll do everything I can to help you. Monsignor Albacete, I hope to see you again as soon as possible. Next week you can hold School of Community in this room…” Two young women stayed with us for dinner (the first, Chemical Engineering, second year, and the second, International Relations with an internship at the UN). The second also came last night to the School of Community that we all have together at New York University every two weeks. About ten students left their e-mail addresses so they could be contacted for the next School of Community. The idea is to work together weekly on the book and to organize every two months a public assembly with Msgr Albacete.

What most struck me was Carlo. He made a proposal that is the desire of his life (I understood this from hearing him talk) and he explained the reasons (drawing them from his experience) for everything he said.
This is what makes me happy, for the future of CLU, certainly, but above all for me. It’s an answered prayer for me: “Pull out one!” and that one, who I was looking for all over the place, as usual had already been put right by my side, the closest of all.

I think this is the beginning of CLU here.