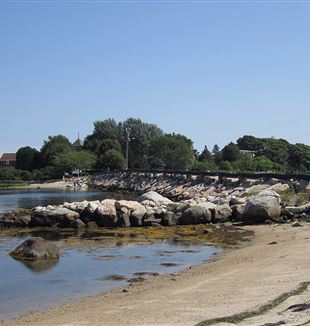 In 1954, Mrs Alys Enders, a Protestant widow, donated her homestead on a small island off of Connecticut to the Catholic Church, because she wanted the beauty of her beloved island to be preserved and she knew that the Catholic Church had a respect and appreciation for beauty.

February 24-28, 2003, twenty-seven priests gathered on Enders Island and found themselves embraced and united by the beauty of Christ. These priests came to this island from New Hampshire, Massachusetts, New York, New Jersey, Maryland, Washington (DC), Florida, Kansas, Indiana, Illinois, Minnesota, and Oklahoma. When Msgr Lorenzo Albacete laid eyes on the island, he exclaimed, “This place itself is an event!”

At Msgr Lorenzo Albacete’s recommendation, the retreat was not led by any one of us, but was the fruit of our unity. Msgr Albacete and Fr Peter Cameron, OP, gave the lessons and preached. Fr Rich Veras began each day with a reflection on the Angelus and gave the announcements throughout the week. Fr Michael Carvill taught us to chant the office together. The priests also saw the unity of our friends in the Movement whose work and presence was a great sign for us. Valentina Oriani-Patrick stayed with us the whole week to act as a secretary, to sing for us, and to translate for Fr Beppe who had come from Italy to accompany us in this gesture. Lorna drove more than two hours each way from Brooklyn to give a presentation on the Spanish architect Gaudi. Maria Elena from the Boston community came down and guided us on a boat ride to see seals in the Long Island Sound. Chris came to play classical piano for us after a beautiful dinner prepared by the Connecticut community at the home of Renzo and Cristina.

Stirred and transformed
The recurring theme of the week was the need to be generated, to become sons in order to become fathers. This experience of being generated through our “fathers” in the Movement has stirred our hearts and transformed us, and we find that this is the deep desire of so many priests, an original human desire that awakens our hearts and gives us hope. We wanted this retreat to be an experience of being embraced and generated by friendship and beauty, ie, an offering to others of what we ourselves have been given.

The joy and unity that arose among all of us was tangible after just the first day. When Maria Elena met us at the boat on the second day, it seemed to her as if we had known each other for years. We didn’t expect that priests would want to sing together, but we found ourselves spontaneously singing on the boat ride. After this, those of us guiding the days decided to teach new songs and sing together before the assemblies, rather than just listening to songs as we had originally planned. What would have been impossible to construct or engineer ourselves was happening in such a natural, or perhaps supernatural, way.

At the closing assembly on Friday, a young priest from Boston remarked that at other priest gatherings he had felt something was lacking, which he found with us. He said, “I hope this is a beginning of a new relationship with other priests. Everything here somehow fits to who I am, to what I desire.” A 75-year-old priest from New York said, “I am retiring in two months and I have been given a whole new vista. I was so moved by Giussani’s words, ‘Live the relationship with everything that becomes present.’ I see in these days that Christ has changed the whole world.” A Capuchin priest from New Hampshire said, “This charism is very comfortable for a Franciscan. I have had a sense of God’s presence here that has been so lacking in the past year. In concelebrating the Mass together, I had such a sense of the unity of the priesthood.” A priest from Kansas said, “I have received something this week, but I don’t know what it is yet. My fear is going back to Kansas and not appreciating the gift. The gift is simply humanity! I want to figure out what this gift is through my brother priests and through reading Traces, and the books.” A young priest from New York said, “In the early Church, the new people were not attracted by the teaching, but by the unity of the Christians. It is like that here. It is the joy of the people in CL that gives it credibility. This joy gives me hope. Giussani is hard to read on your own, but I imagine he is easier to read in the context of the friendship that is in CL.” Fr David from Boston, who could only come to the retreat for one day, wrote a note saying, “Once again, the Movement has put me in front of what is true, beautiful, and good. I had a realization today that I didn’t find the Movement, the Movement found me.” At the closing Mass on Friday, Fr Gary, a new friend from Illinois, prayed, “Let us pray for CL and for the priestly fraternity and for Studium Christi and for all who give their lives to proclaim the positivity of reality.”

In 1954, Fr Luigi Giussani, a Catholic priest, climbed the steps of the Berchet High School, walked into a classroom, and Something happened. The same Event happened among a group of priests on Enders Island in 2003.