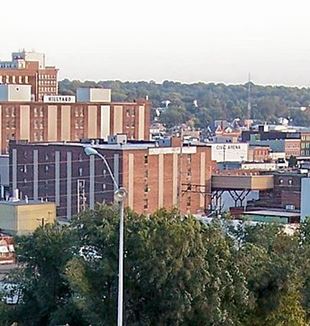 Captain Jones’ Long March
US Army Captain David Jones is 30 years old, with two children, a regulation military haircut, and still a good portion of Sioux blood in his veins, inherited from his prairie ancestors. His city, St Joseph, Missouri, is, like him, a meeting point between the East and the Old West. It is the place from which the mythic Pony Express set out, where Buffalo Bill once roamed, and where the genteel bandit Jesse James was killed by one of the men of his band who wanted to get his hands on the $20,000 reward.

David’s Army adventure began at the age of 18, and the search for a convincing answer to his yearning for God started more or less at the same time. Seeking something that fulfilled a desire of his heart that in the beginning was muddled but sincere, David became a Baptist, but didn’t stay long. During college, working on Middle Eastern studies, he converted to Islam and began attending a mosque in Kansas City. But for a soldier who loves his country, a religion whose aim is the constitution of an Islamic state becomes, in the long run, a cause of inner conflict.

Abandoning Islam in 1993, David discovered a new interest: New Age. It gave rise to endless discussions with his buddies in the barracks, and an intriguing chance to recover also many aspects of the creed and rites of his Native American tradition. In the meantime, he finished college and, after basic training in Indianapolis, David was sent to South Korea. Here he entered the world of the Masonic Lodges, “which are a strong presence among military men,” he says. In February 1994, he was sent to Fort Bragg, where the Rambos of the Special Forces are trained, the same troops as those sent to fight in Afghanistan in recent months. He was becoming disappointed in New Age–its contents were weak, and his heart and reason demanded more. He encountered the Unitarian Church and attended it for a while; but in the meantime he had married Becky, who came from a solid Catholic family and had unending patience with her husband.

“I didn’t want to hear anything about Catholics; I thought the worst possible of them,” David explains. But his love for Becky required at least an attempt at compromise. Both of them joined the Episcopal Church, thinking that this could be a solution that brought them closer together. David fell in love with the liturgy and history of the Church; Becky resisted only for a short while but then returned to her Catholic roots.

Her husband did not stop and did not give up. Soon the Episcopalians, too, disappointed him, and he decided to follow a fellow soldier who had just entered the Orthodox Church. This was a dive into Russian liturgy, the symbology of Eastern Europe, iconography. David was fascinated, but his confrontation with the figure of St Peter, he recounts, was a turning point: “Once you accept the primacy of Peter, all the rest falls like a domino.” The military captain with whom he had become fast friends passed from the Orthodox Church into the Catholic Church, and David decided that it was time that he too make the leap.

I looked at David Jones sitting across from me at a table during a pause in the Diakonia in Washington. He had made me fill page after page of my notebook in the attempt to follow his story, worthy of a movie plot, of which I have only given an outline. He had worn me out… “David, now you have to tell me why you are here.” “Because of him,” he replied, gesturing with his head. A couple of steps away from us, unaware of anything, Msgr Albacete was passing by. “One day I saw an interview with him on the Catholic TV network, EWTN. He was talking about the Movement and his encounter with Fr Giussani, and it was as though he were talking right to me. It was what I had been seeking for years.”

After that interview, David threw himself into an Internet search for information about CL. “I was very interested in it, but this was a complex time. I had children on the way, and I was moving from Dallas back to St Joseph, from where I commute every day to work in the Kansas City recruiting office.” Nothing happened, but the seed had been sown. A year later, while he was taking a course toward his Master’s in Theology, David met Peter, from Oklahoma, who was holding a copy of Traces. A glance was all he needed to understand that it spoke of the Movement that had struck him so much. A friendship grew up, and in Washington, in January, Captain Jones met other faces in the Movement for the first time, thanks to the “yes” he said to Jonathan, who called him at 7:30 in the morning of the same day on which the Diakonia was beginning, asking if he felt like getting on a plane and joining the group for four days.

“What Giussani says cannot be compared to anything that I have read in my life,” says David. “Here I feel at home. Here, as opposed to other places I have been, is Christ. I am struck by the reasonableness of faith. I listened to Fr Fabio explaining that if we do not start with Christ’s Incarnation, we end up between nihilism and pantheism. I think I’m pretty ‘tough,’ but when I heard those words I almost felt like crying, because this has been precisely the story of my life, up to this encounter.”

Jay and the Houston “Sect”
The first impression Jay and his wife had, when they met the CL people in Houston, was that this was an unknown sect. “What else could we think? They used strange words, that nobody says here in our parish. ‘I,’ ‘Mystery,’ ‘Movement’–it could only be some strange cult…” Jay Roussel smiled as he looked at Paolo Zaffaroni and recalled their first meetings face to face, followed shortly by the birth of a great friendship.

Jay Roussel grew up in La Place, Louisiana, close to New Orleans on the Mississippi River Delta, then went to Houston, Texas, to work on developing software. In the summer of 2000, with his wife Stacy, he began organizing meetings in the parish, and this was where he came upon members of the Movement for the first time. The approach was cautious, but their words and especially the way they were said and lived struck him.

His new friends invited Jay to a cookout, and Stacy warned him, “Be careful, we don’t know who they are.” “I wanted to go,” Jay recounts, “first of all because I wanted to know more about them, and then because my parish priest had spoken to me of Fr Giussani with great respect. But a little perplexity remained, because they told me that they were close friends and all lived near each other and things like that. I started being afraid that, in order to join, I would be forced to move out of my house, and the prospect worried me…!”

At the cookout, things went differently from what Jay had expected. He was prepared to hear the two or three key points that explained why he should join, and to listen to a presentation of the “religious product,” as always happens in America. “Instead, there were good songs and great food. I was confused; these were normal people who lived a normal life, only in a different way. I came home and told my wife: they’re OK.” At her first School of Community, after a lively debate on the topic of freedom, Stacy’s doubts evaporated as well.

A dinner with Msgr Albacete was, for Jay, a new turning point. “I felt almost a physical change. I had never heard grace and mercy talked about like this; I had never heard a story like that of the Milky Way told by Giussani. And I understood that The Religious Sense is not for philosophers and theologians, but that I can really propose it to everybody.”

A Rosary in Oregon
When Sergio “Pierino” Villotta decided in 2000 to leave Agrate and Italy to go alone to live and work in Portland, Oregon, on the West Coast of the United States, some were a bit puzzled. It did not seem like a simple undertaking, and in fact it was not easy. But with time, thanks to his presence, the seeds of the Movement have begun to sprout here, too, in a state as big as Italy but inhabited by only three and a half million people. Complex people, big drinkers, extremely liberal, sometimes a little anarchic, and in any case with just one creed: to be left free to mind their own business. The 8% of Catholics and 8% of Protestants are the only drops from the world of the great religions in a sea of churches of every type and of New Age communities.

Sergio, a product manager engaged in important projects for a computer colossus, began attending a local parish while he organized his new American life. Last summer, unexpectedly, he was phoned by a family that lives an hour away from Portland. Their son, John, was a seminarian with Fr Camisasca (in Italy), and his parents wanted to know from Sergio something more about the Movement. They met several times at their house, reading Fr Giussani’s texts together. As time passed, their work grew more assiduous and regular.

In the meantime, in October, Sergio was invited to recite the Rosary by a group in the parish devoted to Padre Pio. And here he began to propose School of Community. The first to join was the girl who had invited him to the Rosary. The next was another girl met in a church where Mass is said in Latin. “Now there are seven of us,” Sergio says, “and one of them, to whom I have just given a book by Giussani, said to me, ‘We neglect too much our relationship with Christ, which is the most important thing we have.’”

A friendship has also grown up with the Archbishop of Portland, John Vlazny, who earlier was in Rochester and became familiar with the Movement through Fr Jerry. In a note to Sergio, the Archbishop wrote, “I am thankful that you are here in Portland. We need the Movement’s evangelizing spirit here, and I see you as a sign and a prophet of hope. You are in my prayers.”