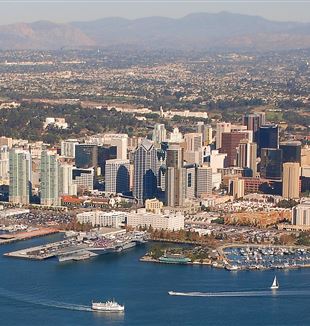 San Diego is a beautiful city, fifth in population for U.S. cities, located in southern California close to the Mexican border. Despite its size, it's fairly quiet. The key words here are "soft and easy", the Californian version of carpe diem. California believes it is playing a leading role in the relaunching of the quality of life in the United States. It feels it has been given a mission to lead the other states toward a world of well-being where no one smokes, everyone is in top physical shape, and illness is practically abolished.

My wife Luisa, my two sons (5-year-old Lorenzo and 1-year-old Francesco), and I arrived in San Diego in March 1998. With the university where I work (University of Brescia Medical School, Department of Human Physiology), we had organized an international research project involving the University of California at San Diego.

At the end of the summer, the problem of school arose for our oldest child, Lorenzo. Here school begins at age 5 with kindergarten, fairly similar to the first grade in Italy. After the first weeks of school, the parents were called to come in for an informational meeting. The educational program of the school was presented; among other things, we were told that the school felt it was essential to the children's preparation to mix the classes and to change teachers every year, so as to avoid creating lasting ties of friendship between the students and preferential relationships between certain students and teachers. The aim of this is to prepare the children for the adult world, where everyone has to get ahead by their own strength, and friendship is considered a sign of weakness.

Always in the spotlight
One of the cornerstones of the teaching method is the so-called "sharing": every week a subject is chosen. It can be a letter of the alphabet, a color, or an event, and the students take turns entertaining their classmates for 5-10 minutes on that theme, trying to hold up on "stage" playing the role of entertainer. This is to get them used to pretending (at a very young age) in their relationships so that they will be ready for any situation.

A large problem concerning children in the States is that of child abuse, to the point that in California spanking is considered against the law. If it can be shown that you spanked your child, you could end up in jail, and testimony is considered valid evidence.

One day my wife was walking along the sidewalk with a friend of hers and their children. At a certain point her friend loudly and energetically yelled at her daughter. In the meantime a car drew up alongside them and a man rolled down the window and threatened to report everything to the police if she didn't stop shouting at her child immediately.

A second example involves us directly. Our younger son Francesco did not want to go to bed at night. Despite our various tricks, as soon as we left his room he would start crying. After a few days my wife and I decided to let him cry to see if he would go to sleep anyway. In fact, after five minutes he was sleeping soundly. The next day, at 9:30 p.m., we heard a knock at the door. I opened it and found two police officers in front of me; they said that a person across the street had called them about an episode of child abuse and they had come to check. I answered that the children were asleep and everything was under control. They said that probably there had been a mistake. The next evening, the same scene, Francesco cried until he went to sleep, and after ten minutes the police were at the door. We then realized that the reason they were coming was the 5 minutes of crying. We explained this to the policemen, who went into the bedroom to make sure everything was all right. For a week we tried to keep Francesco from crying before he went to sleep, and there were no more problems, but one day, while he was taking a bath, Francesco didn't want to wash his hair and started crying. From out on the balcony we saw three police cars cruising our house. After an hour, here they came, policemen knocking at the door. They said they had received another report of child abuse. Rather put out by now, I showed them my children who at that moment were playing happily. I asked them why they kept bothering me, and they replied that a person, always the same one, called them out of fear that something dangerous was happening to the children, and it was their duty to come check it out.

At the police station
The next day I went to talk to the police chief, explaining that we had no desire to be constantly bothered by the police. We asked him what we should do, since I could not suffocate my son as soon as he started crying. The police chief was an intelligent person, and he answered that he would check with the person who had called them. A couple of days later he told me that this was a case of "different parental behavior," that is, a cultural difference in treating children, given that we were foreigners. The person who had reported us had decided to let things go. From then, fortunately, we haven't had any more problems.

We have also discovered that teachers begin to instill in the children feelings of mistrust and doubt toward their parents, telling them not to hesitate to call the police if they are in any danger and not to listen to what parents may say to justify their severity toward them.

Recently the Union Tribune, the local newspaper, reported a new "idea" in education. Since in this society everything is aimed at helping you avoid situations that could offend your sensibilities (it would be unpleasant and not politically correct, it would alter the "soft and easy" balance) , they are thinking of introducing into the school a series of initiatives to make death-perhaps one of the few remaining events that force you to look for the meaning of life-appear almost "normal" and painless. They are thinking about creating classroom situations in which children can see staged scenes of people dying; the children will then be told that this is a natural event that should not be overly upsetting. Then, habituated to these staged deaths, in the end, when a loved one dies, the result will be a shrug of the shoulders and the comment "it was bound to happen sooner or later anyway."