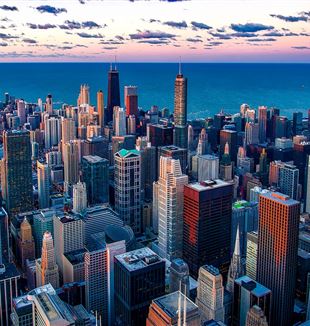 Beginning on the evening of April 7, 1999, the Chicago community of Communion and Liberation experienced something unexpected, something that none of us had anticipated even a few months earlier.

Picture this: It's an unusually warm spring evening; about one hundred people are gathered in the conference room of Chicago's Catholic Theological Union (CTU), the largest Catholic graduate school of theology and ministry in the United States. Most attendees are from Chicago, but some have come from as far away as Minnesota and New York City. The President of CTU, Rev. Donald Senior, is giving a warm welcome to Communion and Liberation; now Doug is behind the lectern introducing Msgr. Albacete, who is sitting nearby. Albacete begins to speak about "The Scandal of Particularity." This was the opening night and U.S. debut of the exhibit "From the Land to the Peoples," which shows the spread of Christianity in the first few centuries through beautiful photographic reproductions of artifacts, early Christian texts, and maps on large panels. The exhibit was co-sponsored by Communion and Liberation, Catholic Theological Union and the Chicago Center for Global Ministries (an ecumenical organization).

The original exhibition, with the original artifacts, was shown in Rimini, Italy in 1996. That night, as we watched what we had planned with such hard work take place, we were all filled with a sense of wonder and gratitude. In a beautiful, simple and concise form we were presenting to family, friends, acquaintances, professors, theologians and religious the passion we feel for the Christian event.

Christ's Incarnation is a scandal, Albacete said, because it offers to mankind a universal, total truth that, paradoxically, was revealed in a particular time and place, and continues to be revealed through this method. The truth is no longer philosophical or ideological. Instead, the transcendental truth has come to us as something we can live, here and now, in the particulars of our lives. To have before us vivid, historical, and archeological evidence concerning Palestine in the time of Jesus, the evangelical journeys of the Apostles, the daily lives of the first Christians, and the trials of the martyrs, was fascinating. The first effect of preparing for the exhibit was to increase our passion for the Movement. We experienced how much we can recognize our own experience in the experience of the early Church. Also as we worked together week after week, it spawned in us a greater sense of unity, giving us a new enthusiasm for living out our companionship and sparking in us a desire to offer this experience to everyone.

Finally, the opening day arrived and then it was over. Now it was time to follow up the earlier invitations with personal appeals to friends and colleagues, to sit at a table during the days of the exhibit, and to offer guided tours. Many people came, Auxiliary Bishop Perry among them. In the tours we gave, we tried to explain how fascinating it was for us to recognize the extent to which all of the historical and archeological facts presented in the exhibit sustain the truth of what has been written in the Gospels.

One of us, Sarah, had a particularly beautiful experience showing the exhibit to Protestant friends. She was amazed by the unity with which she could view the exhibit with them. This was possible because of the exhibit emphasis on the encounter with Christ at the heart of Christianity. New relationships were one of the most beautiful fruits of this work. Some people asked us to bring the exhibit to other places in the Chicago area. Greg was invited to give a talk to business associates. Perhaps the most gratifying result was the encounter with the Fr. Marshall, Chaplain of the Catholic Center of the largest university in Chicago. He was invited to tour the exhibit by those of us who attend that university. Afterwards, he asked them to bring the exhibit to his university in September. While speaking to Bishop Perry, Michele said that such a missionary event is possible only when you recognize something interesting for yourself in doing it and when you pursue it with a joyful gratitude for your encounter with Christ. During these weeks it was clear that the more you throw yourself into such an event, the more you are changed by it. We were amazed that through our small community something so great could have happened.