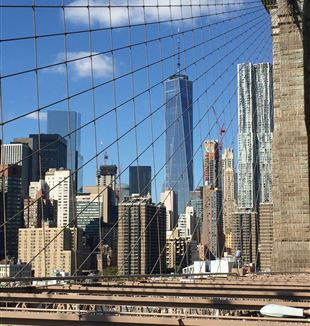 When I encountered the Movement, for me it meant recognizing immediately the chance to live. Not to live "spiritually," but to live. Before, in fact, I was not even able to move, I couldn't manage to do anything, I did not know how to finish what I began, how to work with my colleagues, how to deal with the relationship with my boss, with clients, all very complicated relationships. I told myself and asked myself: I can't make it, how could I ever make it? This became the constant question that I was always asking my friends, like a plea: How can I manage to do this?

If it hadn't been for some friends, who helped me to stick with my job, to change my mental outlook, to understand that this was the right place for me, I would certainly have been lost. Once again, this is not a matter of "spirituality," but of life. School of Community and my friends became my support system, one that I took with me to work every day, one that I talked about as the most important and precious thing in my life, my chance for life.

I started working better, winning jobs (because in a field like mine, you win jobs or you lose them), being more inside the life of a jingle house, creating unity in the office. I did not have the capacity for solving problems, but I could be of help to the people who were with me. I mean above all Ted and David. Their perception of the human dimension is incredible. So together we understood the possibilities that we had. Bit by bit that office became a place of friendship; we began to discuss details of work in terms of what I was living in the Movement. In fact, during our work meetings the others would stand up and say, "Jonathan says that the Movement says this or that." Then Ted would come in, "Let me add…." And I would be seized by panic, but then Ted would shape his thought, he would shape mine for me, and that would become part of the contents of the meeting, of how we would imagine our strategy for going ahead. Usually among musicians there is not much possibility for formulating strategies, but we would try anyway to find one.

What moves me is that now my closest friends have become or are becoming close friends also of David and his wife Jan. Now we spend our free time in a friendship so free and full of generosity that we even work differently.

Free at the Meeting
What happened last summer was incredible: we took two weeks of vacation together. That an important advertising agency like David Horowitz Associates closed its offices in August for two weeks-which are usually full of work-to go do a concert in Italy (for free!), at the Meeting in Rimini, was unbelievable. And this is something miraculous! I never heard of such a thing. Jan said to me, "You know something? It's fine like this; everything will be for the best."

It ended up that we did business even while we were away, we took home with us some unexpected jobs, and in the two months afterwards our way of being together was different, working on the assignments we received, facing things in an active way. We had the feeling that we were not alone. There was a moment when we had an incredible pile of work and everyone was heavily involved in it; the writers were working on two or three different assignments at the same time, and so we didn't have much time for talking among ourselves. One day one of the composers was particularly irritated because he had some very difficult clients on a job; we talked about it together, we tried to think about it, he asked some others, until he came into my office, all excited, exclaiming, "Here's where the problem is! We can't face things by ourselves. We won't make it. There needs to be at least two of us with the clients. We have to work together, be open with each other."

A mine of creativity
In this way work and creativity increased, not to speak of the change in David. He stayed with us more, pushing us in a creative way, helping us. And this is where hard work comes in, because in this push for something more-in which he is so active-David is pushing us too, so that we are not satisfied with our little solutions that in the end would be the death of an advertising agency like ours. He comes into the room (I'm on the edge of my seat when David comes in to see what I am doing) and says, "No, no, move in this direction… and then in that one!" But the great thing is that he doesn't just say it and go away right afterwards, but he stays there and, in a certain sense, he takes the reins and takes me elsewhere, where he wants me to go. So that being together seems more important even than getting all the assignments and being one of the best advertising agencies in New York, as in fact we are.

This year the Christmas Party was for me a great celebration. We sang Christmas carols together, we shared a great dinner, we recalled moments from the Meeting. And some of our clients were there with us, amazed.

If I can say one thing more it is that work never ends because it is living reality always in the face of the Mystery. I perceive even more my limits and weaknesses, which often causes a writer's block for me-, it seems almost as though my abilities have diminished. In this state, it is a miracle that I face situations that-as Father Giussani says-I couldn't even imagine. And this is what I desire for my children, how I want my marriage to be, how I want everything to be: full of this openness toward what has been given to me, betting everything on this charism.