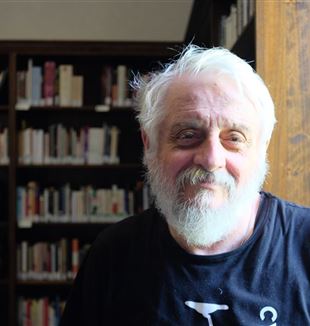 "Someone told me / that the art of mosaics / is nothing but a game / an ancestor of the puzzle. // Strange because to me / the first Christian mosaics / always seemed / the most perfect attempt / to put together / the shattered world." Boris Chersonsky is a poet, translator and professor of clinical psychology. He was born seventy-two years ago in Odessa, on the Black Sea. He has always written in his mother tongue: Russian. At least this was the case until 2014, after the annexation of Crimea and the beginning of the war in the Donbass, when he began to also compose in Ukrainian. As a result, not only did he make the short list for the prestigious Taras Shevchenko Prize, but he received death threats and experienced an assassination attempt. Thanks to the Josif Brodsky Foundation, he managed to leave the city, moving to Italy as so many of his compatriots did, taking with him a small suitcase and little else. Today he is a guest at Civitella Ranieri, a castle in the province of Perugia that promotes residencies for artists from around the world. We visited him on the eve of the Rimini Meeting, at which he spoke. And we talked to him about poetry, Ukraine, and what the “passion for the person” is for him.

Why did you become a poet?
It was an inner drive. Everyone, or almost everyone, starts writing poetry as a teenager. But in time, fortunately, they stop. But there are some unhappy people who continue. And I am one of those. I have always been passionate about poetry, even as a child. My father was a poet. So was my grandfather. Neither of them were successful, partly because those were difficult times during the Soviet Union. My grandfather had to burn all his books to avoid arrest. I found two small collections of his in New York, in the collection of an emigrant from Odessa. My father, on the other hand, published two books, one in the 1950s, during Stalin's time. This was an ideological book, in which he recounted his experience during World War II, where he was wounded twice. And the other one came out when he was in his eighties.

What about you?
I have never wanted to celebrate the Communist Party or make monuments to Mr. Brezhnev, or people like him. I decided that I would leave whatever I wrote in a drawer. Actually, I once went, on the advice of an official poet friend, to have a Moscow publisher read some of my poems. He told me they were good, but could not be published because they were trying to hide something. And it was quite easy to imagine what they were hiding. He suggested that I leave the country. I did not follow what I now consider to have been good advice, given the problems I had with the KGB and the impossibility for me to publish scholarly works that would allow me to teach in universities. It was not easy, at least until the Perestroika years. 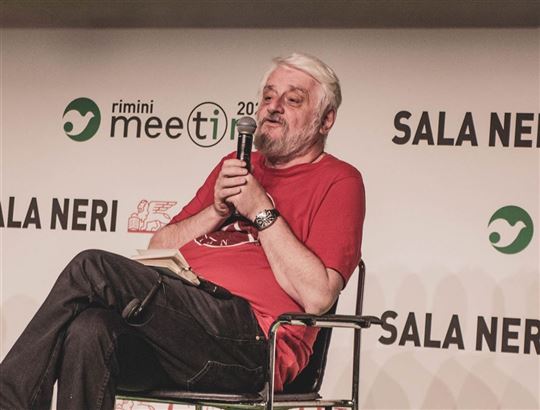 What were your poems hiding?
He did not tell me. But I think he was referring to my Jewish roots and my Christian feelings. I grew up in an atheistic family of doctors, and my parents tried to hide my roots from me, but they could not.

Why?
Because the regime was officially anti-Semitic. That is why I could not immediately enroll in medical school in Odessa. But this aversion started to make me feel Jewish.

And where did your Christian feelings come from?
When I was finally able to attend medical school, I studied Genetics and realized that Darwin's theory was worthless. At the same time I began reading the Gospels and part of the Old Testament, published before the revolution. As I read the Gospel of John, after the first page I realized that what was written in it was true. So I started looking for people to connect me with these things. And I was very fortunate. I was baptized at the age of 24, and my godfather was the director of the Orthodox choir in Odessa. He was a composer of sacred music, a very learned and fascinating man. So were his wife and his son, who was a professor at the conservatory, who was passionate about Byzantine music. Sacred music had been a passion of mine since I was a teenager. I had memorized the Latin Credo: "Credo in unum Deum, Patrem omnipoténtem, Factorem cæli et terræ, visibílium ómnium et invisibilium..." I did not know the difference between Catholicism and the Orthodox Church. But I had become very curious, I could not listen to those words without understanding their meaning.

You were baptized in the Orthodox Church, though.
Yes, in the Church of the Moscow Patriarchate. I was a student of Nikolay Poltorackyi, who had been secretary to the great Nikolai Berdjaev, who had returned to the Soviet Union from Paris, and Galina Kuznetsova, who also came from the French Orthodox community. Theirs was a very ecumenical approach. Of course, I know about the theological disputes between Catholicism and the Orthodox Church, such as the existence of Purgatory, which the Orthodox do not recognize. But it is enough for me that it exists in Dante's Divine Comedy. However, when the Church was persecuted I was comfortable with it. Since it has become tied to political power and dependent on it economically, I have distanced myself a bit. And given the latest positions of the Moscow Patriarchate with respect to the war in Ukraine, I cannot be its obedient son. So I switched to the Kyiv Patriarchate. That said, I know that the head of the Church is not a Patriarch or Metropolitan or even a Pope. The head of the Church is Christ.

What are you writing about now?
My wife and I live in a wonderful place called Civitella Ranieri, in the province of Perugia. It is a 15th-century castle in the middle of nature. Our life has split in two. There is such beauty around us, but in the morning we listen to the news coming from Ukraine. If I dedicate ten poems to the beautiful things I see around me, a hundred are about the war.

What do they speak of?
They are mostly about the close relationship between lies and violence. Some are reflections on history. Others, surrealist portraits of Putin, who unfortunately has become the negative hero of so many of my poems. There is also an attempt to say that no religion can justify violence. Of course, it is permissible to defend oneself and one's country. But aggression is not, as Dmitry Medvedev said, a form of preemptive defense. That is a lie. Giving one's life for one's friends is different from giving one's life for a lie.

What is the one thing a poet should not give up?
Sincerity. And freedom. If you have concerns about how what you write will be received, then you are not a poet. When I was still very young, my father once took me to a friend of his who was an official poet and read him some of my poems. He said, "Before you write something think about whether it can be published. Because if that is not the case, it is something that could hurt your soul and put you in danger." That is advice I never followed. A literature professor of mine tried to get me into the Moscow Institute of Literature. I told him, "No, thank you. Being a poet in this country is a disgrace." 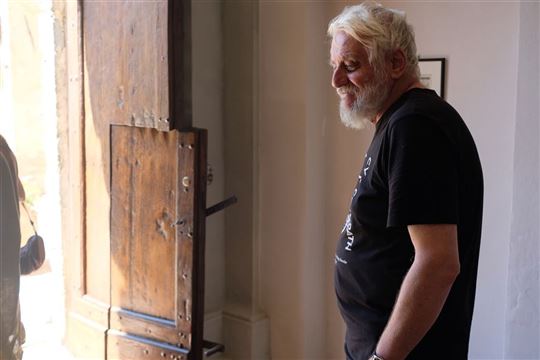 What function does poetry have today? Does it still have a social role?
In Ukraine and Russia, but I think also in the rest of the world, poetry has lost its social value. But it retains the power of self-expression. It also has a function of international communication, in what I call "the great diaspora of poets." But what is most important is that poetry is a dialogue with one's deepest soul and with God. Prayers are often rhyming poems, especially in Latin: (He starts singing) "Puer natus in Bethlehem, alleluia. / Unde gaudet Jerusalem, alleluia...".

What kinds of prayer are your poems?
Twenty-five years ago I translated the Psalms into Russian, trying to reproduce the metrics of the Hebrew original. Today my poetry is a prayer for my country. Then I wrote several poems related to Christmas.

Why Christmas?
It is a favorite theme of painters and iconographers. And I often compare my work to that of an iconographer who always repeats the same subject, but each icon is unique. Then there is a brilliant poem by Boris Pasternak, The Christmas Star, which had a great impact on me. Josef Brodsky also wrote something about Christmas every year.

The title of the Rimini Meeting was taken from a text by Fr. Giussani that says, "Christianity was not born to found a religion, it was born as a passion for man." What is this passion for the person for you?
God became man. And God created man in his own image. And to say that is already enough. It must be guarded. I believe that the image of God is always found in humanity, even when it is corrupted. I worked in psychiatric hospitals for many years, and looking at it in this way allowed me to relate to my patients, understand them better and also learn from them. I remember the case of a schizophrenic woman who had lost her son who had died falling from an apple tree onto a fence. She told me that the boy had fallen from the tree of the knowledge of good and evil onto the fence dividing people. A tragic episode turned into a great metaphor.#Meeting2022