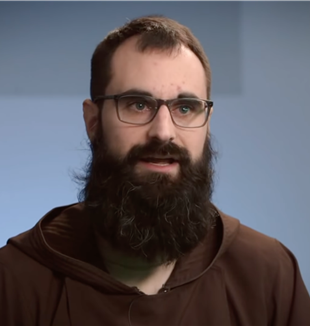 A dream come true: he was a professional actor. Now he deals with Islam and care in contexts of great emergency. "Providence has brought together the past and the present of my life". Stefano Luca is 35 years old and is a Capuchin Friar Minor, but before joining the Franciscans he graduated from the Accademia dei filodrammatici in Milan. After pursuing studies in philosophy and theology, he studied Arabic and Koranic Theology at the Pontifical Institute of Arabic and Islamic Studies in Rome. Since 2018 he has been coordinating the National Service of Interreligious Dialogue of the Friars and since 2019 he has been directing the international department of Capuchin Social Theatre - Caring for Life Through Arts. Last year he published his second book, I cuccioli dell'ISIS. L'ultima degenerazione dei bambini soldato [The children of Isis. The latest degeneration of child soldiers), in which he tells the story of children who have grown up in the Islamic State.

How did you go from dreaming of acting to working with "the children of Isis"?
During my first year at the Academy of Dramatic Art in Milan, I received an invitation to "New Year's Eve in Assisi for young people" organised by the Franciscan friars. The last memory I had of the parish I attended during my catechism years was a trip to Assisi, and it was a beautiful memory, and so I decided to go. During these two days I was particularly struck by the happiness with which the friars lived. The first thing I thought was: there must be something behind it, there had to be something that could explain the happiness that I saw and that I wanted for myself. I spoke about it with one of them who simply invited me to start taking seriously the questions that were arising within me.

What led you to decide to become a friar?
During my second year at the Academy I received an important job offer from England. If I had accepted it I would have been forced to abandon my studies and, undecided about what to do, I accepted the invitation of a friend to participate in a few days of coexistence with other young people in preparation for Advent. I remember thinking: spending two days in the mountains will help me to decide. But that is when the "crisis" happened: I began to feel that my job was not enough, my girlfriend was not enough... On my return, I looked for the friar I had met in Assisi and began a journey with him. I carried on with my work until I had to give up: on 14 September 2007 I acted during the last performance of a play and at the beginning of October I entered the convent. After the first two years, the Lord led me to discover social theatre: interventions that initiate care processes that respond to various kinds of fragility through elements of theatrical work. It was a world that I did not know, but which blended well with the pastoral-missionary actions of my religious family. Thus, from this, since 2009, we have conducted many interventions with the Capuchin Friars, and in 2019 we founded the international department of Capuchin Social Theatre.

How did your relationship with Islam come about? What led you to write the book I cuccioli dell'ISIS?
I should have continued my studies, specialising in various types of trauma and fragility, but since the Lord does what He wants, something unexpected happened: my superiors asked me to start studying the Muslim world and to put together a team that could help our offices in Italy to relate to present Islamic realities, and so I did. I deepened my knowledge of Arabic and Koranic theology by studying in Italy, North Africa and the Middle East. Thus today, with these skills, I am coordinating the National Service of Ecumenical and Interreligious Friendship of the Capuchin Friars Minor, with which we carry out formation and awareness-raising activities throughout Italy.
However, the idea for the book already emerged in 2016 when, in collaboration with Unicef, we set up a social theatre project aimed at child soldiers in the Democratic Republic of Congo. It was from this experience that we began to think of ways to accompany the children of Isis jihadists: in our study of the Muslim world, we had seen that no one had ever bothered to understand who the children were who had lived in the Islamic state and how we could actually intervene and try to relate to them. At this point, my studies on Islam became even more intertwined with social theatre: on the one hand, my research led me to a deeper understanding of the jihadist universe and to the writing of the book, and on the other, we began to plan a social theatre intervention in this context. Local workers had to be trained so that later they, who knew the culture and the scenarios in which they were working, could continue this healing process. Due to Covid, however, the project was delayed.

Let's get to the book: who are the children you are talking about? What stories do they have?
Most of them were born or brought up at an early age to live in Isis-based jihadist contexts. What characterises their lives is the non-existence of a past; they have not been torn away from their families like child soldiers, they have not suffered any violence. They have known the jihadist world from the start through family upbringing: they only possess the gaze that Isis has transmitted to them. While extremists normally destroy schools, Isis has opened them, has had numerous school books printed, all with the aim of filtering reality through jihadist ideology. This is true at every level, including the theological one: these children have seen one of the many forms that Islam can take, but they think that this is the only one possible.

What makes you so concerned about these children? How have their experiences impacted you?
Having personally met Italian foreign fighters, I was strongly provoked: I have been collaborating for many years with the Kayros community of Fr. Claudio Burgio and I met two of his boys who decided to leave to fight for the Islamic State. I was very struck by this fact, not only because it was two boys to whom I was particularly attached, but also because I wondered what would become of the three children born under the caliphate. It is to these three children that I wished to dedicate my book: this fact was for me the evidence that, unless action is taken to accompany and show something else to these children, it will be increasingly difficult to stop this chain of hatred.

The West seems to have forgotten about Syria and Isis. The Afghan affair, which filled the news for several weeks, already seems 'out of fashion'. What can we do about what is happening in these places?
We do not all need to leave... But we do need to inform ourselves well: we must not stop at the first headline. Above all, we Christians have a duty to seek out and listen to our brothers and sisters who live in these places and speak daily about what is happening. If we do not listen to them, who can we trust? They themselves, whether lay or ecclesiastical, are our sources. This is what we have to do: inform ourselves, listen to the Christians there. In this way, we will learn not to generate more fake news and we can truly become "artisans of peace", as Pope Francis says. This will also help defuse the same jihadist rhetoric that tends to provide a partial view of reality.

Do you still see the happiness that you perceived several years ago in the friars of Assisi?
Absolutely, yes. I am a fulfilled person because I am happy in Christ. I am convinced that Christian happiness must be pursued every day, but thanks to Him I can say that I feel fully human, a brother and a father.