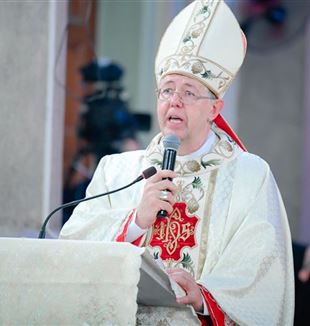 "Joseph got up, took the child and his mother with him by night and fled to Egypt." The flight from Herod is recalled in the liturgy in these very days, during the Octave of Christmas. What a strange country is Egypt, from which the people of Israel fled from slavery, but where Jesus - the new Moses - found refuge. We only think of it at Christmas, as the rest of our imagination is preoccupied by the news. Rarely do we reflect upon the fact that a Christian community rich in tradition has lived in this land, now with a Muslim majority, for millennia (sometimes we realize this from signs in a pizzeria or a kebab stand in our big cities).
A minority within a minority, the small flock of the Latin Catholic Church, 70 thousand souls. In October, the head of this community, Fr. Claudio Lurati, a 62 year-old Combonian missionary born in Como, was appointed by the Pope as Apostolic Administrator of Alexandria, Egypt. He arrived in the year of the pandemic and immediately had to make challenging decisions. "The Orthodox decided to close everything until the beginning of January, on the eve of their Christmas," explains Monsignor Lurati. "We understood that there were the necessary conditions not to stop the celebration of Mass." The great challenge of the health emergency is also in Egypt, according to the new Bishop, an opportunity: "I think, as many have already observed, that we have been forced towards an essentiality that, perhaps, is not bad for us. Then, clearly, we would like to return as soon as possible to a normality that allows us to find ourselves, to meet, to do the things that make our existence pleasant."

Why do you say that essentiality "is perhaps not bad for us"?
The limits that are imposed on our getting together and our activities lead us to focus upon what matters most: being together as a community, as a family, around the Lord who offers us His body and blood. This is what is essential to us, not just at Christmas. And it is easy to forget that.

What is helping you live this Christmas season?
In recent weeks, I wrote a little message to the faithful and it helped me a lot to reflect upon the figure of St. Joseph, who was brought to attention by the Apostolic Letter Patris corde, with which on December 8 the Pope proclaimed the Year of St. Joseph, on the occasion of the 150th anniversary of his proclamation as patron saint of the universal Church. The letter is very beautiful. It is, here too, a call to essentiality: Joseph is a character without frills, he never speaks, but he is there. His presence is felt. Francis says that Joseph's presence is the first miracle by which God saves the baby Jesus and his mother.

What struck you most about the Pope's message?
One aspect is the call to tenderness. Not only towards others, but also towards ourselves. At the end of a year like the one that is about to end, which has called into question so many things, a sense of frustration and dissatisfaction could prevail: all our fragilities and weaknesses have come to the surface. Yet, the Pope says that it is precisely the Evil One who judges his own weaknesses with malice, while the Lord makes us look at them with truth and tenderness, without leading us to condemnation. Then, looking at Joseph, even the idea of "distancing", to which we are becoming accustomed, takes on a profound and not obvious meaning.

In what sense?
Distancing forces us, in some way, to live a greater respect for the other. It is a self-limitation that leaves more space for the other, for their expression, their manifestation. The Pope explains that if St. Joseph is called "most chaste" it is not only because of his conduct, but above all because of his freedom from possession in all areas of life. And so any love, Francis says, needs to be chaste. If there is not this welcoming of the other in their particularity, love becomes a possession, which ultimately imprisons us.

How is reflecting upon these issues helping you in your task as a pastor?
The reality which I am called to live is very fragmented. I have to deal with very different Christian communities, with people of various nationalities and disparate needs. The ideal would be to be "omniscient" and "omnipotent"... Instead I find myself being what I am, tempted to be determined by my feeling of not living up to the situation. The invitation to tenderness toward one's weakness refreshes me. Because, then, God's work uses our weakness more than our strength. In complicated situations, it is not my clever responses that will make the difference. A pure gaze towards things and people is also decisive. Sometimes I find that I send out messages that are misunderstood and I realize that I receive others that I do not quite understand. A pure gaze gives us the patience of listening, which leaves room for time to welcome and understand. 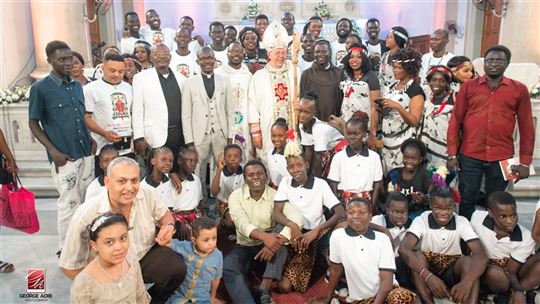 In these first weeks in Egypt, what has struck you the most? What has reminded you of the significance of your mission?
I arrived on October 21. After nine days, I was ordained a bishop. From one day to the next, my life changed. No one, or almost no one, speaks to me anymore as they did before. There is a different way of addressing me. This makes me look at myself and who I am now in a different way. It teaches me a greater awareness of how the Lord makes himself present through people and events. The celebrations that took place, the welcome I received, the words that were spoken to me... Everything conveyed to me the sense of sacredness that God's people experience and see materialized in some specific human figure.

In the Arab Christian world, respect is expressed by kissing the Bishop's hand...
Yes, and in times of pandemic it is a great challenge to avoid it... But sometimes they catch me off guard... (laughs).

In what spirit did you accept your new assignment? What thoughts did you have?
The first feeling was, I do not want to exaggerate, as if many things from my past life, aspects that were very different and not interconnected, had come to a conclusion. Having learned Arabic, the years spent in Rome as bursar of the Comboni Order, the years in Cairo... I did not expect all of this to find a conclusion and a space for itself. I felt wonder. As things unfolded, I was not aware that a plan was being put together. What will come next, who knows. And, I must say, there is the experience of risk.

Did you experience fear?
I said yes without knowing exactly what I was getting into. I was not overthinking and evaluating scenarios. I just trusted. Like I have always done in my life. Trusting led me to be happy and feel a great sense of accomplishment and enrichment. I had no reason to change my method. But the Pope's letter on St. Joseph has something to do with it, too.

Why?
Francis speaks of him as "the father of welcoming" because, he explains, he had to come to terms with things that were not his own. And many times, when I meet people who are very distant from me in terms of history, tradition or language, I ask myself, "What have I got to do with this man? Me, who came from where I came from, who did what I did, why - now - am I standing here in front of him?" And I fit perfectly into that description of "father of welcoming," in the sense that Joseph welcomed something he could not even have imagined, and put himself at its service. And he was pleased with it. 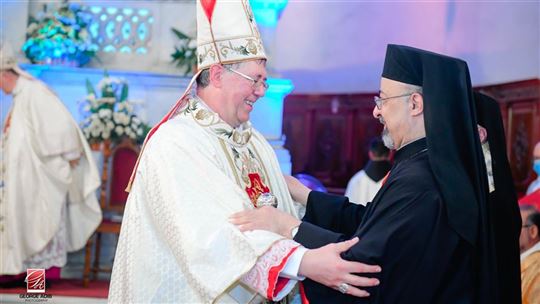 What are the pastoral challenges of the community of which you are Apostolic Administrator?
The Latin Rite Catholic Church in Egypt is made up of a minority of Egyptians and a very diverse majority of foreigners: Africans, Americans, Filipinos, Europeans. The first challenge is that of unity in difference. Trying to make the Church a place where anyone, from whatever part of the world they come from, feels at home. These are people with completely different histories and needs. There are those who are well-off and those who are in Egypt as refugees. Special attention must be paid to the latter. There are material needs and spiritual needs. There is the problem of children's education and the human wound of those who were forced to flee their country and are looking for reasons to continue living after the dramas they experienced. And then there are those who intend to stay here and those who do not. Those who want to stay have the problem of integration, which is a further challenge.

The friendship between the Pope and the Imam of al Azhar has been one of the most significant events of recent years. What does it mean today to be in a country that is a bit like the crossroad of this friendship?
Answering this question is a bit premature, after all I have just unpacked my bags... I have been here too little. But I can say that, even before arriving, it was clear to me that Egypt is a country that, normally but with some exceptions, lives the coexistence of religions serenely. And this has been confirmed to me many times in recent weeks, in personal meetings with the authorities and others. What is happening between the Pope and the Grand Imam is a sign that a friendship is possible and can flourish at any time. It is certainly a door to be kept open. Very open.