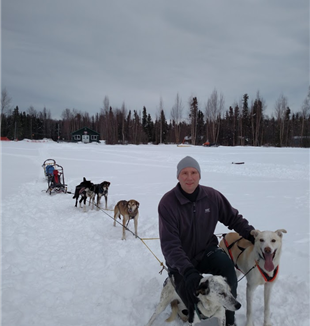 Each year clergy from around the United States meet during Easter week for the annual Communion and Liberation priest retreat. For some men, this retreat has become an annual pilgrimage, a place to reconnect with brother priests year after year, or to delve deeper into the charism of Fr. Luigi Giussani; one man travels by plane fourteen hours from his home in New Zealand every year to attend. While some of the participants are members of Communion and Liberation, the retreat is open to any priest, diocesan or religious, active in CL or not. This April, nearly forty priests gathered at the Franciscan Renewal Center just outside Phoenix, Arizona. In June I spoke to Fr. Arthur Roraff, a priest for the Archdiocese of Anchorage, Alaska, on the anniversary of his fourth year of ordination to the priesthood. This was his first year attending the retreat. He spoke about his life as a priest in Alaska and about what led him to the CL priest retreat this year.

Can you tell us a little bit about yourself and how you came to be a priest in Alaska?

My father was in the military and was transferred to Alaska in 1982 when I was fifteen. I stayed up here for high school. After college I came worked in tourism. I started a company planning events, and I did that for about fifteen years. During that time, I stayed active in my faith, but I never really thought about the priesthood seriously. Then finally I realized there was something missing that wasn’t being answered by the route I was taking. I had everything I wanted: I had a great job, lived in an amazing place in Alaska, I had an active dating life, and I had friends. It wasn’t that I was lonely, I just needed to figure out what God wanted me to do because I wasn’t having any success figuring it out on my own. I took a year to do that. What became clear during that year was that He wanted me to let go of myself. At that time, I identified myself with being very active in Alaska. I was doing a lot of hiking, a lot of running, and outdoor things like that. But then, during that year I became sick, and all of those things went by the wayside. God was saying, “Let go of yourself and let me lead.” And so, I did. A year and a half later, on my birthday, I was entering the seminary in St. Paul, Minnesota.
While I was discerning, I also looked at religious communities. In many ways I wish I had been called to a religious community because I find it very attractive, but what really came through was that Alaska was where I was called. This is where my heart is, there is a need for priests here, and it’s a great place. In my own life I was established up here so that was something I could offer to the Lord. It just became really obvious to me that this was where I was called to serve and since then it has continued to be reaffirmed, many, many times. I’m certain this is where God wants me to be.

What is life like as a parish priest in Alaska?

I’m at St. Andrew Parish in Eagle River, Alaska, about fifteen minutes north of Anchorage. It’s a parish of about 1,000 families. It’s a great parish!
There are three dioceses in Alaska. Anchorage is the Archdiocese, and then there are Fairbanks and Juneau. Just to give you a sense of scale, Fairbanks is about one and a half times the size of Texas, Anchorage is about the size of California, and Juneau is about the size of Delaware. Fairbanks has about thirty priests, Anchorage about thirty priests with about fifteen of us incardinated here, and Juneau has ten priests. Juneau effectively doesn’t have any roads so the only way to get around is to take a boat or a plane. Fairbanks has minimal roads to their parishes, so mostly you get around by plane. Fairbanks is connected to Anchorage by a road, so parishes in that area do have roads, but that’s rural Alaska, what we call the bush area. You have one hundred people here, one hundred people there, that type of population composition.
The beauty here is incredible. I’m going on thirty-seven years as a resident, but rarely does a day goes by when I don’t look around and think, “Wow, I live in the most beautiful place in the world!” We are definitely at the whims of God and nature here. Often times we are thinking, “What’s going to happen next?” For example, the earthquake that happened last November--that was unexpected. Our conversations here revolve around things like, “The Northern Lights are going to be out tonight,” or, “Hey, did you hear about that bear down the street?” or, “Did you know that the fishing limit just went up to fifteen the other day?” Things that most people would rarely have occasion to say, that’s everyday life up here. It is exciting on a human level. From a missionary standpoint, it is a great thing, but it’s also a challenge. Life is so good up here that often times people don’t recognize the need for God. They stop at the signposts. But all things point to Christ; they point to the Artist who created them, and often times we stop and continue to look at the artwork not seeking the artist. We can’t just stop at the art work. It’s not enough.
Another thing that is great up here is the potential. Any time there is great potential, there is excitement. Alaska is one of the most unchurched states in the country. A lot of people have not yet heard the joy of the Gospel. They hear what the media tells them about the Church, which is the opposite of what faith is. They hear the Church is moralizing here, or having problems there, but that’s not the faith. If we are able to communicate the message of Jesus Christ as He gives it, that is joy! To bring the joy of the Gospel to people is the best part. 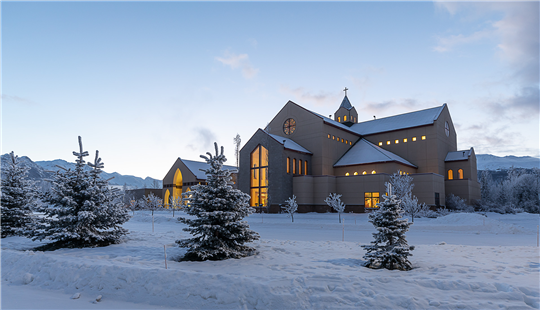 How did you hear about the Communion and Liberation priest retreat and why were you interested in attending?

I had been exposed to CL through some friends ten or fifteen years ago. They were involved in a different community, Emmanuel, but they had respect for Communion and Liberation, and they had some copies of Traces magazine. That’s how it first came on my radar. Then another friend of mine who had studied at the John Paul II institute in Washington D.C. gave me a copy of The Religious Sense. He had read it and recommended I read it; he was a big fan. I took the book and it sat on my shelf for a year before I gave it back to him without having read it. Then while I was in the seminary, I went to one of the meetings in St. Paul, Minnesota, but I thought, “Well, it’s not really for me.”
But by the time I became a priest I had acquired all three books of Giussani’s trilogy and I decided to read through them. And when I did, I found they really resonated with me. Fr. Giussani’s spirituality really compliments my view of the faith. Once I started reading the trilogy, I decided to google “priests and CL” to see if they had any priest associations or retreats. We as priests have to take a retreat each year, and so I started googling and that’s how I found out about the priest retreat. Even after the retreat, I continue to read CL information, literature, and books. It continues to be something that is edifying and seems to be something that God is leading me to in this particular moment.

How was your experience of the retreat?

The presentation style was simple. It was just the truth, and there was something that really felt right. The Western Church really wants precise answers, but that doesn’t map on to how we actually live. We actually know very little about what is going on in our day to day life. We manage through it. How many times do we just rely on a kind of intuition? That’s also where our faith comes in. You just know; there is a rightness to it. From my experience, the more I have been a priest and studied and prayed, the more this has been affirmed. I’m not talking about just a feeling that can lead us east, north, south, and west. There’s a qualitative difference in the experience I’m referring to, because it is what we are made for.
Another thing that worked really well, coming off of Holy Week, was that it wasn’t heavily structured. It would have been hard to do something heavy after Holy Week. The talks were extremely rich, but I could take them in and savor them. I think that goes hand in hand with what I have learned about CL. It’s not so much about an intellectual pursuit, about getting all the answers, but rather recognizing the Event continuing to happen, and recognizing that Christ continues to work in our lives, in the small, everyday things. So, having that time to rest was a blessing. Having that time to hike up a mountain with a few priests was a blessing. Having the time to reconnect with a couple of priests that I knew from the seminary was a real blessing--we didn’t know beforehand that we would be there together. Things that might seem superfluous to a retreat, I think in my case were essential to my overall experience.
Another reason I appreciated the lessons is that as priests, it is easy to hear the same things over and over again, and that can be good because repetition is key. But hearing something refreshing, something that offers a new way of seeing, is very important. My experience was what I needed at the time: Christ speaking to me. The challenge is afterwards, because we don’t have a CL community up here, and one of the challenges of the priesthood is isolation. So, I always appreciate being around other priests. Whenever I have a chance to spend time with other priests it is a blessing. And I continue to read things from CL and about CL and it has affected me. In my activities, the day-to-day things, I’m trying to really recognize the Event in my life, to recognize that Christ is continuing to show Himself to me in ways that only I can understand, because I think He speaks to all of us, and to each of us.