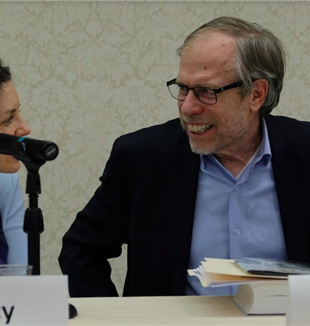 We publish the text of Greg Erlandson's talk on March 10, 2019, during the Life of Luigi Giussani book tour. Erlandson is director and editor in chief of Catholic News Service.

It is a great, even intimidating honor to have been invited to be on this panel. Congratulations to Alberto for this encyclopedic work on the life of Don Giussani. I have joked to my Italian friends that instead of being called “The Life of Luigi Giussani,” it should be called “Three Kilos of Luigi Giussani.” But it is an impressive, detailed telling through primary sources of the life and accomplishments of this remarkable priest.

One of the highlights of my journalistic career was the opportunity to interview Don Giussani for the National Catholic Register. In 1984, I went to The Meeting at Rimini, the fifth one held, as I found out in Alberto’s book. The theme was “America, Americas.” This was my introduction to CL. To this day, I am still close friends with the first person I met upon entering the Rimini fairgrounds: Alessandro Banfi. He and his wife, Maria and their family, as well as Lucio Brunelli, Paolo Biondi, Roberto Fontolan and others had a powerful and lasting impact on me with their example and their friendship. CL was, and remains, for me rooted in these encounters. Or as Giussani might say “bound to the presence of a person.”

In that sweltering Adriatic heat in late August, I remember being in a huge tent with thousands of young and young-ish people, all listening to Hans Urs Von Balthasar speaking. In the exhibit hall, there were all sorts of displays, including a video screen with an endless loop of Michael Jackson’s “Thriller,” the hottest video in the world at that moment. Performing in the evening was the Martha Graham Dance Company. I even interviewed Bill Congdon, an artistic contemporary of Jackson Pollock and a sort of CL rock star. It was a stunning kaleidoscope of experiences, and I couldn’t imagine a similar series of events at any Catholic gathering in the United States.

So my first encounter with CL was characterized by openness and friendship, intellectual engagement, and a certain cultural fearlessness.

Later I interviewed Don Giussani in Milan. He discussed some of the history of CL, its stance toward the Church and the world, how it compared to other movements, and how its message might be received in the U.S. Interestingly, in light of today’s debates, he at one point warned that where there are Catholic organizations or institutions that lack vitality, “there exists the danger of clericalism; and this is the greatest danger today.”

He also talked about the disruptive spirit of CL as a necessary mortification for the Church. “We must rouse the sleeping ones!” he told me.

“We must rouse the sleeping ones.”

The religious desolation that Giussani found among the ostensibly Catholic kids at the Berchet public high school in 1954 sparked in him a desire to awaken the faith in these students. Italy’s cultural condition at that moment was far different from the United States. Here Catholics were still wondering if one of their own could ever be elected president. Catholic families had begun migrating to the suburbs and Catholic schools were still teeming with both students and women Religious.

In Italy the faith was already sleepwalking into the maw of modernity. Giussani came early to realize what lay evangelists in the United States like Sherry Weddell came to see decades later: That God has no grandchildren. What Weddell means by this is that faith is no longer an inheritance. We are no longer in a position where children remain in the faith because their parents are in the faith. The power of secular culture and competing ideologies are such that the term “cradle Catholic” lacks meaningful significance. In a sense, we are all either sleepwalkers now, or adults who have made a choice.

The chapter I found most riveting was about 1968, and in some ways I saw that upheaval as having echoes in today’s events. That fact that GS was so easily unmoored in the wave of radicalism that swept Italy must have been tremendously unnerving to Giussani. The idea that young Catholics could be led to a discovery of the faith by recovering their intellectual traditions seemed useless at a time when history itself was rejected and a new mankind, created in a secularist and ideological laboratory, was promised. God was dead, and history as well. “Tradition and theory, tradition and reasoning can no longer move the person of today,” Giussani said. “Christianity began as a happening because of a presence, because of an encounter.” (407)

The drama of this moment for Giussani is that it drove him back to the encounter with Christ as the starting point.
Today has a similar feel, though in fact we may still be living in the radioactive half-life of ’68. What seems particularly true in our current crisis is that not only have we lost faith in such major institutions as government and the universities, but we have also lost faith in the Church as an institution. The recent uproar over the continuing sex abuse drama is striking in that both left and right now evince the same kind of anti-institutionalism. They divide the Body of Christ into competing tribes, mimicking the identity politics of our public square.

This fragmentation leaves our Church open to the allure of congregationalism. We retreat to our parish, our movement, our school of community, our prayer group, our book club, and we make that our home, our happy place, our refuge, what Giussani calls our “religious coziness.”(492)

This ideological congregationalism is a great temptation, born of disillusionment and American Protestant individualism. It is where Giussani’s insistence on unity with the bishop is as important, even if at times as difficult for us now as it was for Giussani. It is also, I think, where we confront both the temptation of ecclesial movements and their saving grace. They can be criticized, sometimes rightly so, for pulling the best and the brightest away from the parish. At the same time, ecclesial movements can be a powerful reminder of the Church Universal that reaches beyond the parochial, that points us to a larger community that is the People of God, the Body of Christ. The twin challenge we face today more than ever is for our movements to leap the walls and cross the parochial boundaries while at the same time investing in and strengthening the parish as the basic building block of community in the Church.

We must rouse the sleeping ones. Giussani understood that starts with ourselves and it starts with Christ. My friend Alessandro told me that when Italy legalized abortion, with only 32% of the people voting with the Church, Il Sabato ran a headline: Si ricomincia da 32%. (We begin again from 32%.) Giussani told the editors the headline was wrong: Si recomincia da uno. We begin again with Christ as the starting point.

Cardinal DiNardo gave an important talk at CUA a few weeks back. It was a reflection on the Pope’s letter to the U.S. bishops at the start of their extraordinary January retreat. Pope Francis was calling our bishops to prayer and away from the impulse to focus on managerial mandates and programmatic changes. Evoking Lumen Gentium, he instead called for a new ecclesial season. DiNardo pursues this idea, asking what the Holy Spirit might be doing, where he might be leading us at the current moment. Perhaps now we are being called to really respond to the invitation of the Second Vatican Council fifty years after the fact, DiNardo suggests. He begins to imagine that in this “new ecclesial season” “bishops will have to learn new ways to share and delegate their administrative duties” and “attend more to their preaching and sanctifying roles” and “where the shepherds recognize more fully the charisms of the laity and encourage the exercise of those gifts for the good of the Church.”

In this “new ecclesial season” that has been in labor since Vatican II, the laity will be allowed “to more fully live out their own calling to be priest, prophet and king.”

If “the Holy Spirit is using the current moment to open the Church – sometimes with great force,” in DiNardo’s phrase, then we, the laity, will be asked, in Giussani’s words, “to mature in our faith.” It will demand of us to “rouse the sleeping ones,” including that which sleeps inside ourselves. It will demand the full and faithful formation of the lay adult Catholic.

Such formation has been the institutional Achilles heel of the Church, and it is a role that is uniquely suited to movements such as CL.

Indeed, while CL’s roots extend back to GS and the high school, in many ways where its charism resides is in the university and beyond where there is virtually nothing for the adult Catholic.

The movements are particularly suited for this formation because they are themselves missionary witnesses first and foremost. Their power comes not from program, text or pedagogy, but from presence. In that powerful quote from Pasolini, “If someone has educated you, then they must have done so with their being, not with their speaking.”

Giussani himself talks about this power: “The shape of Christian action in the world is this: witness.” (431) I think this is how Christian adults must be formed in the Church being born – by adult men and women who make the Christian life imaginable because of what they have encountered. In Giussani’s language: “Christianity is not an ideology; it is people who have met Christ.”

Like Russian nesting dolls, the three challenges presented to us today are interlocking: The strategy for educating a Christian people is a precursor to the laity assuming a greater role in this “new ecclesial season,” and is necessary in turn if the Church is to engage this unhappy, endlessly restless world.

I will end with a conversation I had with my friend Maria Banfi in Rome recently. I read to her a line of Don Giussani’s that Alberto quotes (403). Giussani is stressing what can only be learned from the Christian tradition: “Otherwise, what does it mean to live according to faith? Unless faith is something to be wrapped in a perfumed psalm and laid to rest in the nether-reaches of the attic.” I said how evocative this line was. Maria said that only after many years in the movement had she come to see that in many ways Giussani was a poet.

Many people have said that in this age of crisis now more than ever we need saints.
I agree. But I think even more we need saints who are poets. Luigi Giussani was one such man.