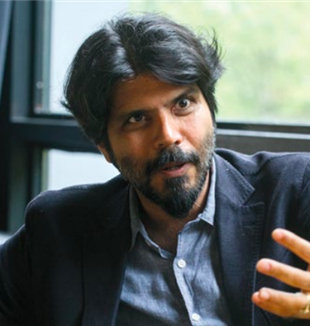 We met up with Pankaj Mishra in a classic pub in North London, where he lives with his family during those brief intervals when his engagements as an author and journalist don’t have him traveling the world. His latest book, Age of Anger, was a best seller in the United Kingdom and in the United States, and was hailed by the New York Times as one of the most notable books of 2017. It offers a “history of the present,” as the subtitle states, in search of the cultural roots of the crisis in which we live.

Spanning from Giuseppe Mazzini to Donald Trump, from Gabriele D’Annunzio to Osama Bin Laden, Mishra’s book describes how the normalization of Western values and institutions such as individualism, capitalism, and secularism necessarily leads to violent reactions. Reactions that are dangerous and, furthermore, useless because they share as their foundation the same reductive vision of humanity promulgated by the ideals they claim to oppose. Born in 1969, Mishra was born in Jhansi, Uttar Pradesh, in northern India. It’s surprising that a thinker with such vast and in-depth knowledge of modern Western thought came from so far away.

In a world populated by billions of people coming from very different backgrounds, does a special interest in Western culture still make sense?

The theologian Reinhold Niebuhr ridiculed the fanatics of Western civilization, the contingent fruits of which were regarded as the ultimate form and norm for human existence. Despite this kind of criticism, Western culture has now attained to global dimensions and influence. Today, we live in an immense, homogenous worldwide market, in which human beings are programmed to maximize their own personal interests and aspire to the exact same things, no matter their cultural context or individual temperament. Theodor Herzl, founder of Zionism, spoke approvingly of what he called a “Darwinian mimicry,” a desire to “mimic” that leads entire populations to conform to the dominant mentality and its illusions of grandeur.

Many people, however, continue to defend liberal capitalism, especially as embodied in America, by holding up its triumphs in the history of the last two centuries.

For centuries, America has been spoken of as the land of freedom by people who have turned a blind eye to the history of its development and the content of its promise. Its promise of growth and expansion (territorial and economic) was from the beginning limited to a well-defined slice of the population, to the detriment of indigenous peoples and other social categories. The capitalistic and in the end societal disorder generated by the disproportion between the promise of happiness through economic gain and the actual prospects of realizing it continues to infect American society, and has spread like wildfire in our globalized world. In the same way, the birth of a capitalist economy in Western Europe brought with it political, economic, and social disorder that generated a brutality unprecedented in human history, including two world wars, totalitarian regimes, and genocides. A brutality that the heralds of “progress” tend to deny, forget, or at least reduce to a limited number of extreme examples, like Nazism and Communism. This disorder is currently infecting a vast number of peoples and nations at a global level.

In your book, you maintain that this homogenization applies not only to the promoters and victims of liberal globalization, but also to its staunchest opponents.

Since the 1800s, a web of overlapping connections has united the most vocal opponents of the materialism and individualism advocated by the bourgeois capitalist system. Herzl, a Jew, was a spiritual disciple of Wagner, the anti-Semite from whom he borrowed the political idea of an elect race. The Bolshevik Maksim Gorky, the poet and herald of a “pure Islam” Muhammad Iqbal, and Gabriele D’Annunzio were all faithful followers of Friedrich Nietzsche. Lenin and Gramsci looked to American Taylorism, and the brokers of the New Deal were inspired by Mussolini’s corporatism. Both Gandhi and Damodar Savarkar, the ideologue behind Hindu nationalism, considered themselves the spiritual heirs of Giuseppe Mazzini. More recently, before his execution, white supremacist Timothy McVeigh became close friends in the supermax prison in Colorado with Ahmed Yousef, the mastermind behind the
first terrorist attack on the Twin Towers.

The lines of thought you cite above are apparently quite unrelated, yet you group them together, ultimately tracing them all back to Rousseau and his criticism, which I would call “archetypal,” of Voltaire.

Voltaire is the prototype of modern man: defender of reason and freedom, opponent of traditional religion, promotor of an international alliance among the powerful, and himself a businessman and investor. With his life and thought, Voltaire made a life of luxury and comfort seem like a legitimate, and even necessary, political and economic objective under the auspices of free competition among the enlightened. Rousseau is the reaction to all of this; the internal critic of the Enlightenment. Rousseau counters Voltaire’s individualism with an idealized vision of an egalitarian community, kicking off a series of revolts against modernity that continues to the present day. Voltaire and Rousseau are, however, two sides of the same coin: a Rousseau necessarily follows from a Voltaire.

What do you mean by that?

Rousseau embodies the quintessential experience of modernity for the majority of people: citizens of a commercial metropolis, lacking any roots, hopelessly aspiring to a place in the sun and struggling with their contradictory feelings of envy and their fascination for, repulsion against, and rejection of the system they fight against while, at the same time, being generated by it. As philosopher George Santayana prophesied, the spread of an individualistic, competitive culture cannot help but generate “a lava-wave of primitive blindness and violence” ready to erupt in times of crisis. Even before Santayana, Dostoevsky had understood that people taught to dream of the blind satisfactions of individual liberty could easily become radicalized when confronted by negative realities. The beginning of the 20th century confirmed this prophecy: during the first major crisis of global capitalism and the largest-scale international migration in history, the individual will’s anarchical and nihilistic quest for liberation took on the form of violent terrorism. 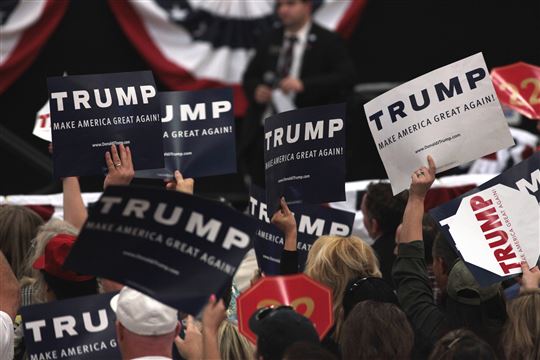 Violence and terrorism, then, are the fruits of a false promise that was not kept?

They are reactions to the reduction of man to homo economicus, to the de-spiritualization of human desire and the resulting deification of it as a merely material interest. The pillars of capitalism–individual autonomy and the exaltation of personal interest–promised happiness and equality, but have instead caused the vast majority of people to be humiliated by a small, powerful group of the elite. The Trump phenomenon, along with the white supremacy and American nationalism that feed it, are examples of this kind of reaction, just as Islamic terrorism is. The true origin of all of it is nothing other than Western nihilism.

Could you explain that further?

In the absence of clear political and religious reference points, men and women flounder in the face of a freedom without limits. When depth of thought is abandoned for a never-ending flux, men long to have something solid and certain, at least on a material level. Unable to return to their previous creeds, they submit to a godfather who can promise them safety. This strange kind of individual liberty within a vacuum is now endemic in the developed
and developing world, as well as in underdeveloped areas.

We are, therefore, reliving past history, but at a global level.

With one important difference. In the history of the two previous centuries, the shocks of modernity were absorbed by traditional social structures–family and community–and state welfare systems. Now all that is on the path to destruction.

But aren’t socialism and more recently, nationalism and isolationism (for example in England and the U.S.) precisely attempts to rebuild the community that was lost in the face of globalization?

The “nation” is an abstract, intangible concept, and therefore is just another false solution to a real problem. Nationalism seeks to fill the vacuum created by the absence of social ties and individualism with a false sense of belonging. It is yet another sham, because it is not based on a real experience of community as in the old sense of being a neighbor. Nationalism is dangerous, because deep down, it presents itself as a substitute for God, giving the illusion of restoring lost bonds.

How can we escape this perpetual cycle of modernity?

It will take a complete rethinking of the self and of the world. Human beings follow those who know how to appeal to their deep motivations. Both our analysis and our solutions must look at the human person in its irreducibility, in its fears and desires and anger. One can only begin to understand and resolve the worldwide civil war of our time in the unstable relationship between the private self and the public one.

Is this just a matter for intellectuals?

No, first and foremost we need to rebuild real communities. I was asked the following question when I was traveling to promote Age of Anger: Where does your critique of modernity come from? My answer was very simple: from my own history. Having a chance to experience the benefits of a village community distinguished me from many of my colleagues who have had to come together within an urban disorder made up of solitude and anxiety. Only such an experience of community, therefore, can lay the foundation for a serious alternative to modernism. I grew up in a village in northern India; a real community where everything had its proper place and its limits. We need to start building villages again within this globalized world.