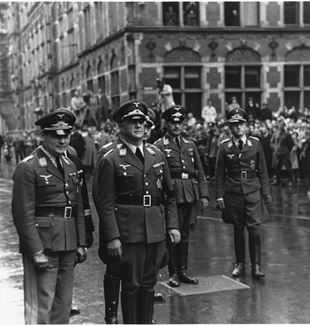 A person dominated by beauty is not concerned with success, the latest trends, joyless pleasures, or what is comfortable, but rather with the depth of the truth that gives meaning to all he holds dear. He does not withhold the response of reverence, amazement, gratitude, and love that is required when he grasps the sheer gratuity of existence. He is, to put it simply, bound or held by that very ground and logos of his own existence. Bound to what gives meaning to everything, he no longer cares for what is unnecessary and trivial, but can endure even the most difficult circumstances. It is this affection to what is truly important that allows someone to offer his life as a gift; it is what allows someone to embrace sacrifice. For this reason, Luigi Giussani said the essence of sacrifice is beauty.

Written as a loving response to his wife’s request to recount his first fifty years of life, My Battle Against Hitler publishes Dietrich von Hildebrand’s memoirs from 1921 until 1938. This account bears witness to the beauty and truth that captivated him since he was young. It includes his articles against Nazism which made him “the greatest obstacle for National Socialism in Austria” and, more profoundly, it reveals a man with a reverent posture before reality, embracing the call of God to be a disciple of the truth, even if the call meant to sacrifice what he loved.

The son of a sculptor, he grew up in a family that revered art. He tasted the wisdom of Homer, Dante, and Shakespeare, was enraptured by the music of Bach, Mozart, Beethoven, and Wagner, and contemplated the paintings of Michelangelo and other Italian painters. A student under Edmund Husserl and Max Scheler, Hildebrand learned the inexhaustible mystery of the human person. As he immersed himself in beauty and love for the human person, he was moved to convert to the Catholic Church. The Church’s beauty revealed to him that everything in which he delighted met its fulfillment in and was the radiation of the holiness of God.

With the eyes of faith and reason, he perceived the ugliness of the Nazi propaganda even when many, including members of the Church, would have rather flirted with compromising the truth. With the help of his spiritual father, he was convinced that he had to abandon his beloved country in order to follow his vocation as a philosopher. So he left, not knowing where he was to go, but grounded in the certainty that God would take care of him: “I had the conviction that this was right before God and thus, despite all the uncertainty of my future livelihood, I felt myself to be completely secure in the love of God. Deus providebit!—God will provide!” Hildebrand moved to Vienna where he founded a weekly journal and wrote vehemently against the evil of Nazism. But that was not his last home. He had to move constantly because he was considered a constant threat to the regime that was trying to assassinate him.

In reading his memoirs, one senses that there was nothing superficial about Hildebrand. One can read his vivid descriptions of places, people, and ideas. He provides a judgment about a person each time he names them, telling his reader (his wife) the impressions they made upon him. In a word, he did not live indifferently. He was attuned to the world around him, not letting routine rule his life and blunt his vision, but receiving everything as a gift. He says, “Human beings should never grow accustomed to any gift from the ‘Father of lights’: the sun shining for us, every drink of water that refreshes us, or the physical health and external means that enable us to lead a tolerable life…We must remain grateful for all goods, great or small, with an undiminished alertness.” He continues:

“We must never grow accustomed to the beauty of the Ninth Symphony of Beethoven, for example, or to the beauty of nature, that we are no longer impressed by them…The spirit of gratias agimus tibi propter magnam gloriam tuam (“We give you thanks for your great glory”) must never wane within us; indeed, it ought to increase unceasingly. Otherwise, as Plato says in the Phaedrus, ‘the wings of our soul’ will wither.”

To grow accustomed to what is good and beautiful is the way in which the banal nature of evil can secretly sink into our hearts and numb our conscience. Along with and many years before Hannah Arendt, Dietrich von Hildebrand prophetically warned against the attitude of heedlessness that would infect many souls in Europe.

One is fascinated by the intelligence that faith brought to a world pervaded by a thoughtlessness that made a person a number and an object, power as the criteria of truth, and evil justified on the basis of pragmatic reasons. Believing that faith and reason breathe together, Hildebrand perceived that a Germany that has lost its faith has also lost its reason. He was not afraid to name God in public discourse. He called German nationalism a “horrible heresy” and argued that “[t]he nationalist is incapable of genuine love, for love of a good is always genuine only to the extent that it participates in the love with which God loves it.” He gave his faith as the main reason why he was against this atrocious regime: “[A]s a Catholic and as a Catholic philosopher I could not in good conscience witness all these horrors and remain silent. Such a violent regime presented only one alternative, namely to make compromises or to end up in the concentration camp.” Hildebrand continues: 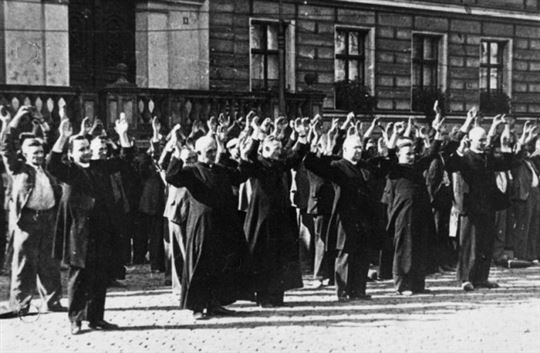 For Hildebrand, the idolization of the State, whereby a person’s value was simply a function of the State’s power, was a rejection of the dignity of the human person and a denial of the unity of human beings. A wrong conception of the State is a wrong conception of the human person. It is for this reason that Hildebrand was not afraid to call the inhumane actions of Nazism, such as its sterilization laws, anti-Semitism, and “sadistic torture of those languishing in concentration camps,” as exuding “the unmistakable spirit of the Antichrist.” He was not gullible to the deception of Nazism’s self-portrayal, claiming to be an expression of “positive Christianity.” Hildebrand saw the Nazi regime as “anti-Christian in its profoundest essence” even when some people, including those in the Church, thought that they could compromise with Hitler and his propaganda. He says, “There can only be one attitude for all Christians toward National Socialism, the one expressed in the Church’s prayer: ‘Hostium nostorum, quaesumus, Domine, elide superbiam: et eorum contumanciam dexterae tuae virtute prosterne.’ ‘We beg Thee, O Lord, break the pride of our enemies and humble their insolence by the power of Thy right hand.’”

Here we can understand what made Nazism ultimately unreasonable: the lack and negation of faith. Nazism was fundamentally an atheistic regime that made the State the absolute, giving the State power over any religion, nation, or person. If there is nothing that transcends the State, then there is nothing that can prevent it from exploiting the person. The problem with the idolization of the State is that it makes power the source of the person’s value rather than truth. Dietrich von Hildebrand argues:

“No act of idolization originates in a real recognition of value; in fact, it necessarily blocks a recognition of the value proper to a good, for it does not recognize how this good is an image of God. The same is true of nationalism. Nationalists never see the true values of their nation, its cultural nobility, or the deeper significance of its national genius. All they see is its power, its gloire, its political genius.”

Therefore, nationalism, like any act of idolization, makes a person a caricature of himself. A lack of recognition of transcendence reduces the human person and diminishes his awareness of his unity with others.

Denial of faith makes reason weak and incapable of recognizing what the person is and what he ought to be. A faithless reason leads to thoughtlessness, which is the failure to grasp and imagine the other because one has lost sight of belonging with the other. And this failure to imagine the other, not being able to see one’s belonging with the other, gives birth to violence. A thoughtless world, that is, a world without affection, is a violent world.

What faith does is preserve reason’s capacity to grasp the mystery of reality which unites all things together. It grounds affection when reason finds it hard to embrace the other. Hildebrand’s witness allows us to see that faith does not diminish but upholds and strengthens reason. Because he was deeply rooted in his faith, he was able to recognize the beautiful good and beautiful truth that was in the German culture even when what was apparent was nothing but evil. Although he had to distance himself from the violent regime, we can sense that it was his faithful reason that allowed him to love his country. In fact, it was because of his very love for his country that he felt the obligation to condemn the evil that was emerging. He states:

“Anyone who has read Faust, who has listened to the works of Mozart and Beethoven, or who has felt the unique nobility and the deep, distinguished preciousness of the German nature, need cast only a single glance at the shrill, demagogical mentality of the National Socialism, which aims only at producing external effects, to see that nothing less German could possibly be imagined…Anyone who has immersed himself in the calm and lovely world of the fairy tales of Brothers Grimm; anyone who has been embraced by the chaste poems of Des Knaben Wunderhorm; anyone whose soul has been expanded by the radiantly golden richness of spirit found in a poem of Goethe’s; anyone whose heart has been moved by the angelic, sublime beauty of Mozart’s music, can feel nothing but deep revulsion at the sound of the Nazi Horst Wessel Lied, and must inevitably feel that here two irreconcilable worlds have confronted each other.”

One cannot help but be struck by the deep thoughtfulness that permeated in the dramatic life of von Hildebrand and his criticism of Nazism. Because of his love of truth, a love that came from his hopeful faith and faithful reason, he was able to suffer any consequences that was born from that love. He followed the example of Socrates who loved truth more than his own life, and the example of Abraham, whose faith led him to unknown territories so that he could be certain that God will never abandon him. His memoirs are a witness of faith and reason, a witness that is capable of giving a response to a violent world because it is a witness to a beautiful life. They show that it is the beautiful life that can give birth again to affection and make the world a little less violent.