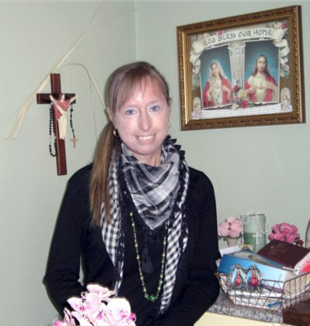 I was standing on the corner of Liberty and Broadway. I remember suddenly running through a smoke cloud down the avenue toward the water to get away from the building collapsing, but I hadn’t even realized it was collapsing. We thought maybe the collapses we heard were bombs exploding. The combustion from the smoke and inertia was throwing people against the walls and mailboxes but, for some reason, I was able to keep running and, at a certain point, I was “transported” four blocks ahead.
Those of us having this experience still don’t know how we flew so far ahead in a few seconds.

Someone needed to take care of packaging up our out-of-town employees’ personal effects in our corporate apartments downtown–they had all fled their apartments. I volunteered to go back in to work on this. But, by the third day of the aftermath, I was waking up with hugely swollen hands. I was also bleeding from the nose, and had other symptoms of mercury poisoning, like many others.

We went immediately into treatment to sweat out the toxins. But some of my symptoms remained. Within ten days, I got the worst possible diagnosis: scleroderma, which is an over-production of collagen. This is a fatal autoimmune disease, with mortality usually within ten years. It causes a hardening of skin and organs–a scarring of tissues, noticeably the hands and face, but the internal damage is worse. Maybe it was the treatment, or maybe I have a genetic disposition… Whatever the scientific reasons, I know that God allowed me to have this for a reason–this awareness dawned on me within minutes of hearing my diagnosis.

This is because of a path I had been on for some three years before the disaster. In 1998, I had begged Him to show Himself more in my life, and from that day He has been preparing me for this, my cross. I went on with great hope and promise, which came from Another.

My mom, who has been battling cancer for years, had a hard time for a long while, but now she is able to accept it. She was so used to enjoying all my successes and my energy! I tell her, and everyone, that if you are in a relationship with God, He will never ever let you down. Why get angry or be afraid when you can talk to God, pray about it, and He always answers! This is the new gift of “seeing” that I have now. It has been an interesting ten years. I feel more myself. Every time I have gone to the doctor over this time it is something new–losing my fingertips or feeling the hardening of my left lung… But I am not thinking about all this while it is happening. I did not even realize how changed I was physically until 2006 when I saw a picture of myself and I said, “Wow, I am deformed!” 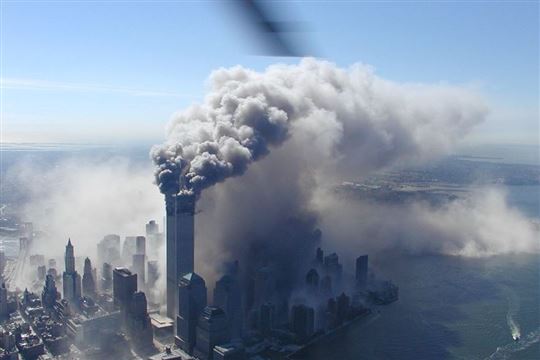 God brought me to the best of success in my twenties. With my music composition/choreography and kinesiology degree, I was an Assistant to the House Composer at Carnegie Hall. I danced with professional choreographers in concerts at The Kennedy Center in DC and at Joyce Theater and other venues in NYC. I went on to design fashion accessories for a private women’s label. After that, I was working in “character licensing”– including for Lucas Films and Star Wars. I had a massage therapy business on the side, a wonderful boyfriend, and great family and friends…

My life, although successful, was chaotic. My mother, in the throes of her second bout with cancer, had just moved in with me and my brother, so we could take care of her. I had a greater desire for meaning and was ready for any change. So, on the suggestion of a friend, I went on an interview for this job with Royal Blue Financial Corp. (now Fidessa) in 2000. I was hired not necessarily for my resume but, oddly enough, because I was on an amateur national golf circuit, and my would-be boss loved golf! I thought, “Maybe Providence is at work here!” As a facilities manager, I did everything from running around with a real estate broker, dealing with lawyers, to finally renting the office space; I would then design, manage, and upkeep the offices and data centers.

Two months into the job, I discovered that there was a chapel 50 feet from my office, Our Lady of the Rosary, the Mother Seton Shrine, and I made that my second home. This was an answer to my prayer, which by then was becoming, “Lord, I want You to be my full focus.” Because I was working there, I was downtown on September 11th. And that brought this disease, which has put Him front and center, as I had asked. It was almost a relief to know I would have to depend on Him now. God had to take each one of my gifts and talents away one by one for me to see what the real Gift is. My life is no longer who I know, all my contacts, what I can do–because I can no longer do what I was able to do physically. Now my life is just Him, on whom I fully depend. I still work in finance, designing office spaces. I can’t play music anymore but I still have my voice and I am composing music with the help of friends. I have to give everything to everyone because I am so dependent. But if I had not already been in a relationship of dependence on Christ, accepting so much help would be unbearable. Instead, my friends are signs of Him for me. I was even given a phenomenal doctor and friend, from the Memores Domini, named Franz. He has saved me physically more than once–and has helped me emotionally and spiritually as well.

I know a lot of pain, and getting through the day is truly trying, but I cannot emphasize enough that God is there every minute. How can I not accept all this as a gift?!