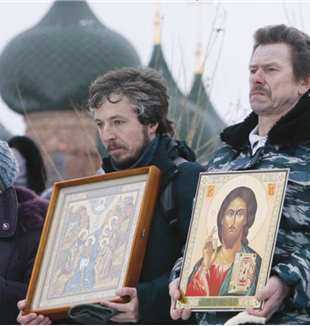 “I don’t want to say that they had prophetic powers, but those icons that I had them place on the altar in the Cathedral... I wanted them to depict St. Peter and St. Andrew, who, you know, were two brothers. One was father of the Latin Church in Rome, the first Pope, and the other was the head of the Church in Constantinople, where the Church in Moscow originated, so much so that Andrew became the patron of Russia.” Archbishop Paolo Pezzi, of the Archdiocese of Mother of God at Moscow, thinks back to that gesture, a little less than a year ago, and of that embrace between Pope Francis and Patriarch Kirill in Havana on February 12th . “It’s an embrace between Peter and Andrew. Looking at the pictures I thought, that embrace, that encounter, contains everything.”

It was an event dreamed of by John Paul II, sought after by Benedict XVI, and mentioned by Pope Francis from the time he first stepped out onto the balcony at St. Peter’s. Every attempt seemed blocked by obstacles built up over centuries and by the more recent strains on the relationship: the Greek-Catholic Church in Ukraine, the Catholic Dioceses established in Russia after the fall of the Soviets, and the resulting accusations of proselytism. Archbishop Pezzi himself came to Russia as a missionary with the Fraternity of St. Charles Borromeo in the early ‘90s and long experienced the cold of Siberian winters and of relations with the Orthodox Church. Now, there’s a meeting under the gateway of José Martí airport, a long discussion and the signing of a Joint Declaration that will make its mark beyond the confines of the two sister Churches. From persecuted Christians to secularism, from defending the family to the refusal of relativism. Their actions were accompanied by words, tempered by the “elders” of ecclesiastic diplomacy; new formulations of ancient issues. But in the end, one image is fixed in the heart and mind of the Catholic bishop living on Orthodox soil: “The Pope saying, ‘Finally! We are brothers.’ And the Patriarch responding,‘Now, things will be easier.’ From now on, every time I look at the icons in the cathedral in Moscow, I can’t help but think back to that embrace.”

What did you feel, watching theHavana encounter from Moscow?
Gratitude. When I found out it was planned and when I saw that it really happened, I was full of gratitude. The most important thing for me was that the meeting happened. At a prayer vigil in our Cathedral, the night before the meeting, I said that for us Christians, encountering one another has great value. Christianity communicates itself through an encounter. You need men truly alive to encounter each other. If this is possible, then there’s hope and many possibilities will open up.

What is your appraisal of the Joint Declaration?
It includes some points of newness and, I’d say, this is good. The Document says many things and maybe you could speculate on some expressions used in the Russian versions. But I’m not a professional exegete. In any case, I see two important aspects. First, it underlines the need for a common witness. The task of the Churches, which deep down is the task of every Christian, is that of witnessing to Christ. If it’s possible to do that together, then the power of the witness is infinitely stronger. If, then, we add the fact that the content of the witness is proclaiming mercy, forgiveness, an embrace–the embrace we saw in Cuba–then this aspect takes on even greater power.

And the second aspect?
I don’t know how many people will agree with me on this, related to a topic as specific and delicate as that of Ukraine, but I think it’s important that the Document speaks of Greek Catholics as a Church. This means recognizing above all that good is coming from this Catholic entity, too. And that the “other” can be thought of, not as a political or religious adversary, but as someone to speak with, someone to encounter. There probably aren’t many who read the passage this way, but for me that aspect is present.

What is the relationship between witness and the search for unity?
I think that when you make witness a priority, you are already starting from something unified. Otherwise, you couldn’t talk about witnessing together.What unifies us may be very fragile. The Declaration refers to a “common tradition,” though that has many holes and wounds. But I think that [unity] is first and foremost the recognition of something that is already there, not something that we have to add or fix. There is that as well, but first it’s the affirmation of something that is there. If we start from the treasure we already have, from the experience we have of Christ, then we can also communicate it, we can offer a witness.

Francis aggressively sought to make this meeting, already hoped for by his predecessors, with an approach that many people think doesn’t take into account the unresolved issues from centuries past.
I think that this Pope and his approach are part of “God’s surprises,” which Francis himself speaks about. He’s always catching us off guard. We have to get in the habit of letting God surprise us. I think that the approach the Pope chose is the most effective one, saying, “If you call me, I’ll come;” not setting preconditions for a meeting, but saying in front of everyone, “We are brothers, we have the same Creed...” These words express an outlook from which problems, according to God’s time, not ours, could possibly be resolved. One thing is certain: outside of this outlook, the tensions will never be broken down. From that perspective, I’d say that what happened is very interesting. Let’s not forget that the Pope, immediately after signing his name, said: “Unity is achieved by walking forward.” This doesn’t mean that common declarations are bad; it means entering into the mindset of encounter, of meeting face to face; not considering the other to be an adversary, but as a possible companion on the journey.

Some have mentioned a “diplomacy of mercy;” a non-political attitude that has “political” effects because it breaks down tensions and sets new processes into motion.
I’d venture to say this is exactly Christianity’s task. Jesus Christ did not think about solving political problems, but by offering Himself He also offered a perspective for facing and resolving problems. The Church has done this throughout history. Her task is to prompt, indicate, and give tools; to propose gestures that, among other things, foster political solutions. And her audience is made up of men and women of good will, not excluding those who have political or other kinds of power and responsibility. This is the direction Francis is going. Of course at times he does it in a very radical way, but this is part of the nature of Christianity and of the Church. In some cases, we’ve seen almost immediate political consequences: think of what was done for the U.S and Cuban relations, of the courageous trip to Central Africa, or the prayer vigil for Syria.

Will the meeting in Cuba change your daily work?
One thing that has already changed is the way I carry myself. Especially since I became bishop, I’ve realized something: the space between your “personal life” and the service to the Church is almost eliminated.Which means that today, when I wake up in the morning, I’m more grateful. When I get to work, I’m more inspired to look, to ask, and to search for how God will try to amaze me. I desire even more to be converted. This is the change, the new viewpoint, that Francis’ and Kirill’s embrace has introduced in my life.

And for those from the Orthodox world around you?
One good thing that I’ve noticed, and have been struck by, is a lessening fear of encounter. After the embrace in Cuba I’ve seen some Orthodox seem less afraid, for example, to come and see the Catholic Cathedral in Moscow. Of course this could be partially an emotional reaction, like saying, “There was a meeting... let’s go see who these Russian Catholics are.” However, I have a positive reading of the effects, which I see within the same logic of the encounter.