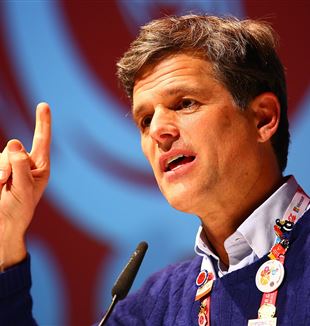 “It’s amazing. They talk about everything here, and people look you in the eye.” Timothy Shriver just finished his first presentation at the Meeting. He’s 56 years old, Catholic, and has five children. Son of Eunice Kennedy, sister of JFK, he is a branch on one of the most influential family trees in the U.S. With a background in education, he is now the Chairman of the Special Olympics, the association of over 4 million athletes in 170 countries that sponsors over 20,000 events each year. Founded by Eunice in 1968, the organization was left to his leadership after his mother’s death. Transporting the audience to the stands of a stadium and through the music of the Beatles, he told the story of this “movement” in the attempt to show that “diversity, our lack, is a road” to personal fulfillment. “Who on earth do I think I am?” is the first step. Because, as he said later, the goal in life is self-discovery.

To Be a Father
“In all of this I discovered a God different from the one I knew. Not a powerful judge, but someone who loves me. One who forgives, and that changed everything. There are no shortcuts in front of a God like that.” For example, in his life as a father: “You can love your children, but love them if they do well in school, if you know what I mean. One time, I met the mother of a child with disabilities. I asked her what she needed. She said, ‘My son has already given me everything; he taught me how to love him.’ There, I understood what it means to be a father.”

Fully Alive
The words “all of a sudden” in the title of this year’s Meeting struck him: “‘All of a sudden,’” he said. “It’s not something we’re used to attributing to God. ‘All of the sudden’ means falling in love, when your eyes meet with someone else’s…The mystics tell us that you experience God through reflection, through silence.” And how do people look you in the eye: “Often people come up to me to ask for help, for money, or for work. Here, I want them to meet me.” To the question of what brings fulfilment in life, he responded, “I could say doing what I like, writing, for example. Or... when I recognize God’s presence inside of me, in what I do… I’m fully alive.” Which, is the title of his recent book. “It means seeing what’s there, in nature, in reality. ‘Practicing the presence’ as one friar used to say. Discovering God in yourself and recognizing Him in others. Seeing God is the goal of life. So you can discover who you are. Again, who do I say I am?”