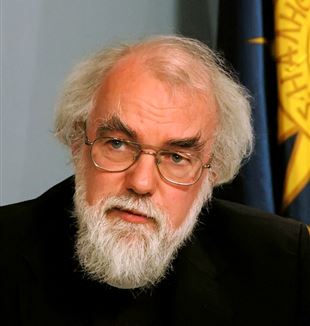 How does one address a former Archbishop of Canterbury? In the case of Rowan Williams, who is the Baron of Oyster mouth, director of the Magdalene College of Cambridge, and member of the House of Lords, the right way would be “Sir.” Those who know him, however, understand this would not please him; it is better to use the less formal “Father.” This small sign indicates a lot. Theologian, poet, a man keenly interested in English and Russian literature, one who served for ten years as the Primate of the Anglican Church, he is considered one of the foremost thinkers of the Anglo-Saxon world. With his white beard and deep voice, he has the physique du rôle of the great sage. He was seen sitting next to Fr. Julián Carrón during the audience onMarch 7th . The extraordinary thing about his encounter with some students of the Movement is its normality: a question asked at the end of a conference, a friend in common, John Milbank, who invited himself to dinner unannounced, and a few afternoon teas. Thus, when it was proposed that he come to Rome, he, the first successor of Augustine of Canterbury since the time of Henry VIII to participate in the funeral of a Pope, cleared his calendar and replied, “All right, I’ll come.”

Father, why did you accept the invitation?
First, I wanted to hear Pope Francis in person. I had never done so. I wanted to get some sense of his humanity and what he wants as a teacher. And then, out of friendship with those who invited me. I felt very much enriched and inspired by the company of my friends in CL. These young people strike me with their joy, generosity, and certainty in the faith, which is free of arrogance.

What was your impression of the Pope?
It seems to me he’s a man who is, as we say in English, very at home with himself. He has a spontaneity and a natural style. He speaks from his center, and it was very clear in what he said that that center was Christ. That was the center to which he directed all of us.

And the people in the Square?
I was struck by the appeal of his vision and teachings to so many young people, and by the capacity of a meeting like that to draw together many cultures but also many styles of beliefs and worship in the Church. It was interesting tome that the music, for example, represented both the traditional and modern. It was a very unself-conscious blend of the old and the new. You come away feeling a very rootedness in tradition, but no simple looking backwards.

Do you have any questions about what you heard and saw in Rome?
I’m still thinking about the experience and also, I suppose, thinking about how in such a very rapidly changing political world, this vision of Christ’s centrality in human life is expressed in the choices we make. We have an election coming up in England. The Pope sends us back to our encounter with Christ and we are all first of all asked to bring ourselves to His light and receive His judgment and mercy. So I’m not losing any sleep by the fact that there are not nice lists of things to do, but just an invitation back to the fundamentals of faith.

Is there anything that astonished you in Francis’s words?
The fact that he talked about Caravaggio’s Saint Matthew, very vividly and immediately. And the imagery of the bottle of still water, that was wonderful. If you are deeply rooted in the tradition you don’t have to worry about that alone. Both the Pope’s words and the whole atmosphere reminded me that there is a big difference between living in a tradition and being a traditionalist. That’s what I read in Fr. Giussani, and what I sense in so many friends of CL, and in the Pope.

What does it mean for you to be faithful to tradition?
First of all, as the Bible says, continuing to follow the Apostles in the Sacraments, in the reading of the Scriptures, in prayer with fellow Christians. But also the desire to listen intensely to the spiritual profundity of all those who have come before me. Tradition is not an external way of acting, but something interior: listening and receiving what the brothers and sisters in the body of Christ have discovered through the centuries. It is not a burden, but an enormous gift. But at the heart of this, there is sacramental life. Francis said that everything begins with the encounter with the carpenter of Nazareth.

How did you encounter Him?
I was brought up in an environment where the reading of the Bible was a very regular thing. I could point to a couple of occasions when I was a teenager, particularly the Eucharist, where the sense of that immediacy of encounter came through. And then, the reading of Saint John’s Gospel has always been for me the point where I felt most addressed. The words that Jesus speaks to Nicodemus, to the Samaritan woman, to Lazarus, always sound addressed to me. And of course the words to Mary Magdalene when He speaks her name.When I think of encountering Jesus, it’s those moments from Saint John that have been for me the moments and the words that most expressed that reality. That’s where he speaks. In Saint John’s Gospel, Jesus speaks to individuals more than in any other gospel. We actually hear His voice to particular persons, particular names spoken. He says “Lazarus,” He says “Mary,” He says “Simon, do you love Me?”

The Pope said that “the special place of the encounter is the caress of mercy of Jesus Christ on my sin.”What does that mean for you, existentially?
Let’s go back to Saint John’s Gospel and the incident of the woman taken in adultery. When all the accusing voices have gone away, the woman is left simply looking into the face of Jesus. She knows in that moment that she is a sinner and she is loved. In Jesus, we encounter the complete truthfulness which shows us what we are. It’s a merciless kind of truth, and yet we know that it’s inseparable from love. We discover who we are and also whoHe is.Judgment and mercy belong absolutely together. We know that if He is who He is, then I am a sinner, but also that if He is who He is, I’m forgiven.

Is there anything in particular that helps you put Jesus in the center?
For me it’s mostly the daily practice of the Jesus Prayer of the Orthodox tradition, saying that prayer for 30-40 minutes every morning,“Jesus Christ, Son of God, have mercy.” During the day, when I’m walking or doing nothing in particular, turning to it reminds me where my anchorage is. I carry a little wooden cross in my pocket. Simply something very concrete I can lay hold of, whether it’s words, a picture, or a cross, to remind me of Him.

What did it mean for you, as an Anglican, to be at the Audience?
I don’t know if I would say I was truly conscious of being there as an Anglican. I was there with people who shared with me the reality of Baptism and who, like me, belong to the Body of Christ. In the Scriptures it says that Christ is “the desire of all peoples.” We should not be surprised that the heart of all peoples turns to Him. As an Anglican,I was simply grateful for the testimony, prayer, friendship, and celebration. I pray that one day the historical barriers will end and a way will be found to truly be together and share the Eucharist.I don’t know how or when, but I certainly pray that one day it will be possible.

What did you discover about Fr. Giussani and CL on this occasion?
That for Fr.Giussani every moment is the moment of the encounter. For him, Christ has no free time. Jesus is there awaiting us in every moment, which means that every occasion bears an invitation from Him. When I have to deal with a practical problem, a difficult person, a moment of frustration or temptation, it is a sign that Christ is inviting me to a deeper friendship. This theme was very strong in everything that I heard, not only in the public moment, but also in the conversations I had in those hours.