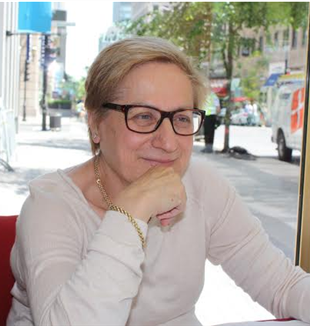 How can someone be born again when they are old? To answer this question, as long as I live I will be grateful for the possibility of looking back at my friendship with Carla.

I work as a medical oncologist in Montreal. I first met Carla as a new patient of mine two years ago, after she was diagnosed with advanced breast cancer.

Honest, funny and bright, I liked her immediately. Yet, at the beginning it is not easy to enter into a relationship with her, nor gain her trust. She had a very strong personality. You could see that she had suffered a lot and that there was scepticism, and that she was not ready to give up easily.

She had developed a thick skin, spending most of her life working in Youth Protection, a position of responsibility, dealing with many difficult cases. Never being married, she didn’t not take orders easily, and instead she was used to giving orders and being in charge. When you have a diagnosis of advancan cancer, this can be a problem because it completely tears apart the feeling of being in control; you are forced to take care of yourself rather taking care of others, which somehow leads to an increased feelings of vulnerability.

When she received her diagnosis there was a very promising new treatment that we wanted her to receive, but to my surprise she is extremely reluctant to follow my advice. It took three sessions before we could agree on that protocol. Like many other relationships in life, often the relationship with a patient grows in time, and without you realizing it. I could not identify one precise moment, but in a series of moments during Carla’s appointments in my clinic, a genuine friendship grew, especially in the honesty in which some of our discussions occurred.

It was clear that she was struggling with not being in control and accepting her new physical limitations. Together with her cancer symptoms and the side effects of her treatment, we often discussed the topics of freedom and dependence; accepting the fact that we are loved first, recognizing the presence of God in all circumstances. Her questions were my questions and I could not lie. When she would talk about her job in Youth Protection I would tell her about my adopted siblings; in front of those questions I could only speak about my experience and about my friends, the same friends that she first met at our Christmas concert, which she previously had come to with her sister and her sister’s family.

Slowly, her face started to change, as did her attitude. She was free, with a freedom that comes from gratitude.

The point-of-no-return for her was the CL family vacation of last year, which she came to with her cane and with great curiosity. It was difficult to describe what happens there for her in any other way than to say it was a “falling in love”. When she came back from the vacation she starts reading about the Movement and asking Paula about our history and our friendship. Together with the beauty she has seen, what conquered her was the fact that her freedom was continuously provoked and never forced. When her sister started questioning her and showing curiosity about the Movement, Carla warned her, “I have never seen anything like this. At the vacation I cried every day in my room, I was so overwhelmed…I am not sure you are actually ready for that!” Not exactly the “Come and see” of the Gospel, but luckily that does not discourage Carla’s sister to come with her the School of Community that September.

Shortly after the vacation her cancer got worse, and acceptance was not obvious. In the same period, one night I was on my way to go to the birthday party for Andrea, Carla’s nurse who also has enthusiastically joined the Movement two years prior. As I was driving by Carla’s house I call her and ask if she is free and to tell her that I could pick her up. She immediately said, “yes”. After we hang up I realize that she hasn’t even asked where we were going — this was the same person that I was fighting one year prior, trying to convince her to accept the best medical treatment!

For the entire next year Carla faithfully came to School of Community with the openness and wonder of a child. It was a real “work” for her. Shortly after the audience with the Pope in Rome (that she is so sad not to be able to attend) she sent me an email with the Pope’s speech for the World Day of the Sick. Then she wrote: “You have been such a blessing for me. You told me so long ago and you have let me experience what the Pope has written. You have taught me how to be free, and I am yet not there, but I am a working at it. This cancer has enabled me to grow beyond what I thought possible. We would never have met if I had not had cancer. God does work in mysterious ways.” And then, referring to the School of Community she wrote, “What a beautiful time of my life! I have never worked so hard, not even when I completed my Masters, or even the most trying and complicated investigations. I keep reading and reading, wanting to catch up to even 1% of where you guys are, if that is ever possible. I am entrusting myself to Him and praying to Fr. Giussani for peace and strength. PS: I think that the Pope is a member of Communion and Liberation!”

The irony here is that even without speaking she was like a magnet for all of us. Her simple gaze, her freshness, her freedom and enthusiasm, were contagious for all of us. Just looking at her was slowly converting those around her, including her family.

In all this Carla remained herself, even with her “control-freak” attitude. About three months ago she decided that she had to understand what the Fraternity was. So, she spoke with Andrea and Maria, other friend that work in the Human Resources Department of our hospital, and who had also joined the Movement in the last year. Carla probably was a bit upset, thinking that she did not know as much as they did on the topic of the Fraternity. To solve the problem she invited all of us for supper!

In a hospital, it is already exceptional when a surgeon speaks to an oncologist. Instead after this series of unexpected friendships had developed in our hospital, for the past year you could see at the same School of Community, or eating around the same table, any combination of a surgeon, an oncologist, a nurse, a patient, a patient’s family and the HR representative. Thinking about that, one had to ask, “What is this group born from?”

The night that Carla has planned to ‘inquire’ about the Fraternity, Maria instead started speaking about a difficult time she is going through at work and how, with the help of the School of Community, she surprisingly found herself living the difficulty with great freedom. That lead to a discussion where Paula and Carla also recounted how the encounter with the Movement had changed their way of dealing with their jobs. It was the most beautiful evening. This group of people telling each other what Christ is doing in their lives, in great simplicity and in wonder. At 11 pm Carla said, “Oh, I was supposed to ask about the Fraternity!” But it was obvious by then that God had already answered her question, and not with a definition. The answer has been there in front of our eyes the whole evening.

Putting her pride aside, this year Carla has planned to attend the CL Family vacation in a wheelchair, but then she had to cancel when her disease suddenly grew worse. The day returned from the vacation I went to see her and we agreed to stop all treatments. After few seconds she said, “You have to sing La Strada at my funeral”. In her last week at home she kept giving orders and planning her funeral, while the desire grew to finally see Jesus and Fr Giussani. She died on July 8th, the day after her registration in the Fraternity of Communion and Liberation was confirmed.

A few weeks before she died, Carla was able to attend a wedding, accompanied by a friend from the community. At the table, radiant in the wig she really hated, she started telling all her old-time friends – most of them Jewish – of her encounter with the Movement. “This cancer saved my life. It really did. I am not naïve, I know very well that I can die soon, but I have never been so alive. You must see what I have seen, it’s unlike anything else.” And on the way home with our friend: “What a responsibility we have! Our Movement is so small and so many people are waiting to encounter what we have!”

It saved her life because it made her whole. I would probably say, “the Movement saved my life”, but instead she said “this cancer saved my life”, which unites everything; more than the way I would normally divide good from bad.

Carla, if I could only understand 1% of that…