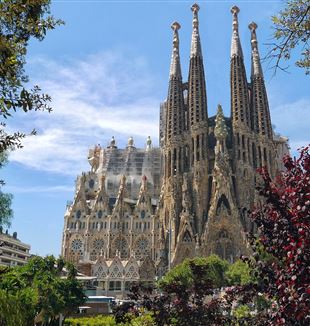 “Slowly, slowly.” It torments her, but she is also the first to smile about it, because it’s written in her name: Shiho, two Japanese ideograms that mean “to walk with good will.” And, in fact, she must go forward slowly in her work, one attempt after another. She shapes the modeling clay with her feet, her hands, tries something, looks at it, and tries again, with wax and then with plaster. In the end, it will be done in bronze. The project in question is the three doors of the Sagrada Família’s Nativity Façade. These doors will depict enormous fields of ivy and pumpkin blossoms, interspersed with small animals like the earthworm that she is holding in her hand, the fruit of almost an entire day’s work. She must go slowly, slowly–even if she would like to run, especially now that she has found “the path.”

First love. She received Baptism at the Easter Vigil. At the end of a solemn, prayerful Mass celebrated by candlelight in the crypt of the Sagrada Família, the priest couldn’t contain himself, exclaiming, “Déu n’hi do!” The untranslatable Catalan expression roughly means, “Wow!” He wasn’t wrong. The story of Shiho Othake, the young sculptress who works side-by-side with Etsuro Sotoo, one of the artists who took up the legacy of Antoni Gaudí, is worth the entire Basilica.

The small workshop on two floors is packed with all sorts of instruments, scale models, plaster flowers, and fruit. Higher up, behind shelves and cellophane, stone walls and vaults can be glimpsed, a reminder that we are nestled in the Sagrada Família, which is both cathedral and construction site. When Shiho entered Sotoo’s studio for the first time, her idea was to be like air for him, “necessary, but transparent.” Not only as a breath of fresh air, since the space is what it is–the workshop of a long-time artisan–but “by being here, to do what he needs.”

She is from Tokyo, and the first time she saw the Sagrada Família was in a school textbook. Seeing that photograph, she fell in love. After obtaining her degree in Art, she started to teach, but every so often she would come to Barcelona to see this church that seemed to be calling her. “One day, I said to myself, ‘The Sagrada Família is there. If I want to be near it, then I have to go live there.’” In 2010, at age 28, she moved to Barcelona. She started out as a waitress in a restaurant not far from the Temple, and tried to make contact with Sotoo. She wanted to learn from him. And so, when she met him at a conference one day, the siege began. She laughs as she describes it: “At a certain point, he gave up, and he told me that I could come here–to do the cleaning.” Three years later, and after entire months spent just watching him work, she now collaborates on his project. But there was never a moment in which Sotoo said to her, “Ok, I’ll take you on.” As she says, “It just happened–slowly, slowly.” Of course. “I never take on young people who idolize me or the Sagrada Família, because they are deceiving themselves,” explains Sotoo during a break in his continuous, silent work. “But I saw that Shiho was not here for that. She was looking for something else.”

He understood this because, for her, cleaning was not a pretext. “One can come here to clean, but do it distractedly because he is watching me work. She really did clean, putting all of herself into it.” She still does, bending over insects, dusted with plaster, intent on observing. One can fail to fully understand what she says about “talking” to the stone, “being” that dragonfly that she is shaping, or “entering into” the few words that her teacher addresses to her. But what one understands perfectly is that she loves those insects, leaves, and wax; that she learns to love reality together with Sotoo. The phrase hanging on the studio door says, “In order to do things well, what is required is first love, then technique. –Gaudí.” Everything comes from the relationship that the father of the Sagrada Família had with experience, especially when he was a sick child in a country house and nature was his only friend. “I often think of that solitude of his; I would like to keep him company,” says a disarming Sotoo. At the base of the Nativity Façade are sculptures of chickens and other animals. He looks at them and feels the warmth of the sun that touches them, the scents, the breeze that blows. “I think of what they are looking for, what they need–food.” He wants to give it to them. Sculpting is giving. And so the doors will be a field dotted with insects. “All that lives on the earth is happy, but without knowing why.” The “why” is just above them–Jesus, with Mary and Joseph amid intricate stonework. The field will be ivy, because it is a symbol of obedience, “the total condition of life,” as Sotoo says. 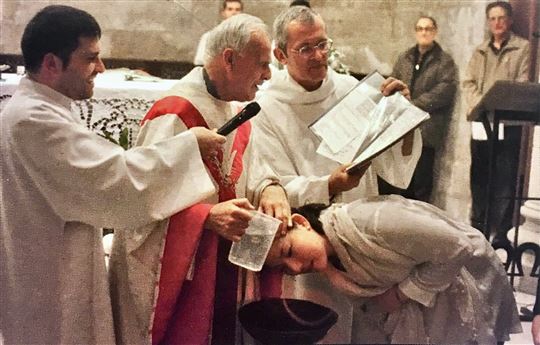 Rhythm and silence. He and Shiho never talk a priori about the work that they do. “Sotoo taught me that I won’t find the answer in my head. I have to try, because it is in trying that the idea is born. We only talk by starting from attempts, from what can be seen and touched. It’s as if he said to me continually, ‘Move–you move.’ And, even if I know that he always has the solution, I never ask him for it, because I want to find it myself.” Like when she was told that, from one day to the next, she would have to leave for Paraguay, to paint the walls of a clinic for terminally ill children. “I knew nothing about it, and I was scared. He said to me, ‘Even if you won’t know how, or won’t be able to do anything, look at what’s there.’” She arrived at Fr. Aldo Trento’s clinic, but nothing was explained to her there, either. “I was always with the patients, with Aldo and his friends–always with them, looking at them. In the end, I did feel the need to do something for them, and one morning I started painting those walls.”

Sotoo works in the studio on the second floor, which overlooks Shiho’s workbench from a small window. Every now and then, he watches her. “I do my work, but I always have her in mind, what she is doing.” If he notices that she is having trouble, he stops by, using the excuse of having to go to the bathroom. His visits change her. One day, they were working together to sculpt one of the nine-foot pinnacles to be placed on the peaks of the spires. They spent two or three hours without speaking, just tapping. A television crew was filming them and, before leaving, one of the cameramen approached Shiho. “You couldn’t keep up with his rhythm. But, every so often, he waited for you. He accompanied you with the sound.” “I hadn’t noticed,” she says, “and yet, there were moments in which I suddenly felt good. It was because of that.”

The seed and the name. “The Sagrada Família is there so that she can grow,” says Sotoo as he looks at her, seated beside him, her head always a little bowed. “I only want her to be happy when she makes a mistake. If she didn’t make mistakes, then she wouldn’t know who she is, where she is, and with whom.” He stops. “She wouldn’t know why she works.” He says that the important thing is that she has a question, that it’s necessary to live with a question that is within oneself like blood. “If the need doesn’t come from Shiho, then my answer will be worth nothing. The true answer always gives birth to a new question.” But this requires suffering. “I searched for another path! But there isn’t one. Suffering is necessary”—just as the stone suffers when it is sculpted. “This is collaborating in God’s design. There are many overlapping reasons why one works, and it takes quite a journey to arrive at the true one.” From Gaudí, he learned that this is only possible together. “Man cannot work alone; he doesn’t build anything. And what can I desire more than happiness, if not someone who accompanies me there?” They even make lunch for each other. “Together, we also learn to value things. She knows how to do this, because she gives value even to a mustard seed.” He speaks with all of the yearning of one who wants to communicate his heart to the other. “You would have to tear it out of your chest and put it in her hand. But you can’t. This will happen in Heaven, where there will be no words. But this is God’s invitation, to give ourselves like this.”

Shiho left her family for a church that she saw in a photograph. But here, she discovered that she is even more of a daughter to her parents, who still live in Tokyo. “Being near the Sagrada Família is being near my father.” She has always adored him, a happy man who raised her to love all of her desires; eventually, she started to have one that was bigger than all of the others: to be like him. Unlike the rest of the family, he is Catholic. “Even if I wasn’t baptized, I had the desire for God within me. But I was afraid to believe, and I didn’t say anything, because in our culture you don’t talk about these things…” In Barcelona, she started to get to know Christianity better–in her work, in the faces of new friends, at catechism. “When I was in Tokyo, I always asked myself why I was there, why I studied, why I worked, what was my path. With faith, I found it. And with Baptism, I started down it.” Sotoo is a witness of this, every day. But he is very clear about one thing: “Her Baptism has nothing to do with me, nor with the Sagrada Família, nor with Gaudí. It is purely her, and God. There are many friends who are with her. But she is directly linked to God.” It is because of this that he kissed her hands and embraced her at the Easter Vigil. “I should kneel when I see her.”

Shiho’s Christian name is Montserrat. Everyone suggested names of saints to her, of people “on a journey,” like she wanted. But in the end she chose the Virgin, patron of Catalonia, one day at Mass while looking at the statue of the Morenita, who, according to tradition, did not want to be moved from her mountain. “I needed something that ‘stays’ in order to be able to walk.”