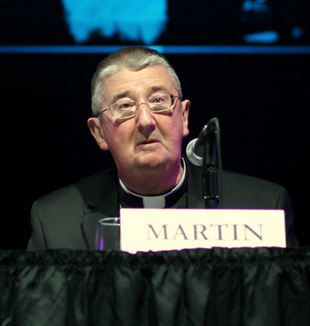 As with much of the world, Ireland has been weathering a rough storm. Following fast on the heels of the priest scandal came disastrous financial woes. The earlier scandal and today’s economic austerity measures have hit the Catholic Church and people of Ireland full force, but the country’s stalwart Archbishop does not shy away. Looking these struggles in the face, he points out the need to prioritize education in all sectors, and for the Church to support and promote “new evangelization,” in which the Catholic identity is redefined and “God is a God of love with whom we can in Jesus enter into a personal relationship.”

Ireland has been going through incredibly dramatic times. How has this affected the lives of people?
Just two years ago, very few would have imagined the change that was to take place in the Irish economy and the effects of that change on society. The effects of the austerity measures are being felt by everyone. There have been voluntary reductions in salaries and a reform of pension operations. There are severe cut backs in the State’s budgets for health care, social services, and education. There are certain types of investment in people which however cannot be cut back without damaging precisely that factor which was the real source of Ireland’s economic growth: the talents of its people and especially young people. Sadly, in its time of wealth, Ireland was not spending sufficiently on the education of its young people. There is anger at the fact that ordinary citizens have to pay the cost of a crisis caused by the recklessness of others and by deficiencies in the regulatory structures especially in the banking and financial spheres.

It was speculated that people would turn more to the Catholic Church for hope during the economic collapse.
Has Ireland become more religious as a result of these austerity measures?
Perhaps, to some small extent. Certainly there is a renewed sense of realism and an understanding of the extravagances of the past. But the real roots of the religious crisis in Ireland are other. They are linked with a crisis of faith, among individuals and within Irish society. It is a crisis about the Church as an institution within a broader context of a change in the cultural infrastructure which had traditionally sustained the faith of people but which has become much more fragile over the years. Ireland is a highly secularized society. Unfortunately, the Church in Ireland was slow in recognizing the fragility of the infrastructure of faith and in many ways continues to think that the challenges of tomorrow can be addressed with the pastoral methods of yesterday. The challenge of faith in Ireland can only be addressed by radical efforts of new evangelization. That new evangelization must however have its own Irish characteristics. The renewal of the Irish Church must be led from within the Irish Church.

Others have been calling for a complete eradication of the Catholic Church of Ireland.
Many people are disillusioned by the Church. It is very hard to underestimate how much the scandals regarding the sexual abuse of children and the manner in which it was dealt with by Church authorities has wounded the Church in Ireland. Inevitably, the effect of these scandals on some has been a complete rejection of the Church and even in some places it has resulted in appeals to remove the Catholic Church’s presence in society. In other cases, there are appeals for a sort of de-institutionalization of the Church. There are those who would wish an Irish Church separate from Rome. There are those who would speak rightly of a strengthening of the role of lay people in the Irish Church, but really want a Church in which Office and Order would be radically emptied of their theological meaning. Renewal is required, but that renewal first of all requires conversion on the part of all and not just outward changes in structures.

Where lies the greatest need for change?
Church authorities must learn to listen; but that listening is not to be equiperated simply with sounding-out public opinion. It requires above all listening intently to the Word of God and proclaiming that Word and living it. There is a strong move to reduce the number of schools under Church control, yet at the same time on local levels most parents still want their children to attend schools with at least generic religious inspiration. Almost 90% of all State-funded schools are Catholic schools. There are very few alternatives available and Catholic schools welcome children of all faiths and none. This shows that the Catholic Church is open and welcoming to children of different cultural backgrounds but it has inevitably contributed to an erosion of the concept of what a Catholic school truly is. Indeed there is a certain ambiguity as to what “being Catholic” means in contemporary Irish society.

In what sense?
Many people who no longer regularly practice will still come to Church on special occasions and on the great feasts. In some cases, people live out a sort of cultural Catholicism; in other cases, what is called Catholicism is really a type of civil religion, a social spirituality without dogma, with blurred reference to a Jesus of one’s own creation. The Irish Church is extraordinarily weak in its knowledge and use of the Scriptures. In other cases, there remain, among those who have drifted from Church life, vestiges of faith and of affection for the Church. Priests in Dublin have gone through a troubling period and at times they felt lack of support but they have never abandoned hope. There is a genuine enthusiasm for renewal among priests, diocesan and religious. The results are already being seen. Attendance at the Christmas liturgies was striking. The Church in Dublin is opening new horizons in evangelization. We have a full-time Episcopal Vicar and Office for Evangelization. We have a priest dedicated full time to the animation of pastoral programs based on the Scriptures. Priests are working on the implementation of a new National Directory of Catechesis, “Sharing the Good News.” The occasion of the 50th International Eucharistic Congress, which will be held here in Dublin in June of this year, is being seen as a unique opportunity for renewal of the Christian life.

Many years ago you were on the Pontifical Council for the Family, and have continued efforts to bolster the family’s role in society.
The family in Ireland is still healthy compared to other parts of the Western world. There is a high birthrate and rates of divorce are low. Like other parts of the world, however, more and more young people opt to live together before marriage or not marry at all. The current Constitution of Ireland supports a solid definition of marriage. But there are moves to change both the Constitution and its definition of marriage. The Catholic Church has long been in the forefront in the area of providing education for marriage. Priests tell me that in the evaluation reports completed by couples at pre-marriage courses there is a growing appreciation of the specifically religious context in these courses. For too long the Church appeared in a role of moralization and people failed to transmit the real depth of the Christian message, which is about Jesus as a person who in His life and teaching reveals to us who God is. God is a God of love with whom we can in Jesus enter into a personal relationship, which then brings richness to the way we live our lives. Irish young people, I have often said, are among the most catechized in Europe but in many ways among the least evangelized. The new movements like Communion and Liberation have much to offer to the Irish Church. The situation of young people which Fr. Giussani faced in Milan in the late sixties is not dissimilar to what is being experienced in Ireland today and new ways have to be found to introduce young people into a reflection on their own lives in the light of the message of Jesus Christ. On the other hand, the new movements have not made inroads into Irish society and into the Irish Church as much as they have made elsewhere. This is due to a strong individualistic trait which has emerged from the history of Irish Catholicism and from a difficulty for the Irish Church to change. The Irish Church has invested much into a Catholic school system and very little into consolidating the faith of people after they leave school.

On January 14th, you participated in a panel at the New York Encounter entitled, “John Paul II: True Saint because True Man.” Can you tell us something about him?
Anyone who knew Pope John Paul even in a superficial way realized that his being a man and being saintly were deeply entwined. One had only to see Pope John Paul in prayer to realize how deeply his entire life was bound to Christ and how his mission was to bring that message of Jesus Christ wherever he could. In his life Pope John Paul demonstrated how it was in encountering Christ that we encounter our real selves. He dedicated himself totally, placing himself totally at the disposition of whatever the Lord was asking of him. This was even more evident as his physical forces weakened. Despite illness, his commitment never waned. He showed the world that one can fully and authentically witness to faith in every stage of one’s life. Pope John Paul was a very free human being. Even those who worked most closely with him were often surprised by this internal freedom. Some of his initiatives not just surprised his closer collaborators but almost scandalized them. I am thinking of his initiatives of prayer for peace at Assisi or his request for forgiveness for the past sins of Christians. Anytime Pope John Paul invited you to discuss something with him, you would always try to go well prepared, but you could be very quickly surprised at the angle with which the Pope would address the subject. He was deeply prayerful and many decisions about the life of the Church were truly made on his knees. He was also a person who showed himself genuinely grateful for even the smallest task that someone took upon themselves for him.