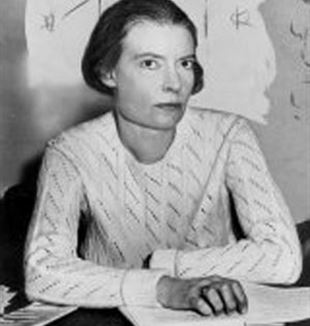 American Catholic activist and convert Dorothy Day (1897–1980) sought Christ constantly, particularly among the materially and spiritually poor of New York City. After her conversion and impatient with a Church which she felt did not do enough for working men and women, Day started the Catholic Worker, inspired by a wandering French peasant and intellectual, Peter Maurin. Together they started the Catholic Worker newspaper. Then they began the work of hospitality in New York City and with farming communes nearby, sharing common life with the homeless and out-of-work. Christ was visible in the thousands of faces Dorothy Day and her co-workers encountered. Mary Lathrop, a free-spirited young artist, was both a recipient of Day's hospitality during the time of her own conversion, as well as a helper at Maryhouse, home of the Catholic Worker.

The artist grew up "in a virtually religion-less atmosphere, but with a whiff of Quakerism." But, Lathrop says, "I was searching from the time I was in grammar school. I thought I was finding some answers in poetry–Emily Dickinson, Carl Sandberg, and later Gerard Manley Hopkins. I was looking for answers–what was it all about? What am I doing in this world? And the poets seemed to have distilled some answers, but I didn't know exactly what those answers really were. They seemed to be speaking from authority, but what authority, I didn't know. I didn't know that it was Christianity." After she discovered Christianity, life with Dorothy Day educated her regarding what and Who this inborn search was calling her to.

How did you get from legendary Protestant evangelist Billy Graham's first "crusade" at Madison Square Garden (in 1957) to the Catholic Church?
I was converted through Billy Graham, but was left without a church. The only religious person in my family was my stepfather's Aunt Elizabeth and she was Episcopalian. So I was baptized and confirmed in the Episcopal Church. One day, we were talking about the things that I liked about the church, and she said to me, "But, my dear, those are the Catholic things." Something started to work in the back of my mind. A little later, I was in the hospital for about six weeks and there was an attendant named Denny who was a Catholic. He was very kind and patient and gentle. I remember sitting on the edge of my bed waiting to be released, and telling myself, "I'm going to be a Catholic." I feel that Denny was the angel who prepared the way for me. As soon as I got out of the hospital, I went to the Paulist Fathers on 60th Street for instruction.

How did you then get to the Catholic Worker?
Catholic novelist Caroline Gordon was a family friend, and had helped me along in my conversion process. I told Caroline that I wanted to do something more than walk little old ladies home from church after Mass in the morning. So she said, "I think you should go to the Catholic Worker and see Dorothy Day." I went down to 39 Spring Street and talked to Deane Mowrer, who said to me, "Well, why don't you stick around for a while?" I said, "Oh, you mean move in?" She said, "Yeah." Just like that. They put me right in an apartment with Dorothy Day and another volunteer, at a time when Dorothy was away on a speaking tour. One day, I was trying to get the floor cleaned up in the huge dining room. That floor at Spring Street was the filthiest, blackest, most sodden floor you have ever seen in your life, soaked with soot and water from being mopped all the time, and it was horrible. I was trying to get it clean and I was all drenched in black sooty water. There was a large crucifix on the back of that dining room wall. When Dorothy Day returned from her speaking tour, she came directly up to me and asked, "Are you Mary Lathrop?" I said, "Yes." She said, "I'm Dorothy Day." I turned and looked at the crucifix… The memory of this meeting has stayed with me ever since, and its meaning continues to deepen. The Catholic Worker is not all moonlight and roses, and that's an understatement. I have suffered plenty on account of it, but it's been the most important thing in my life, and Dorothy Day was the most important person in my life. Kate Hennessy, one of her granddaughters, wrote, "Her call is powerful." 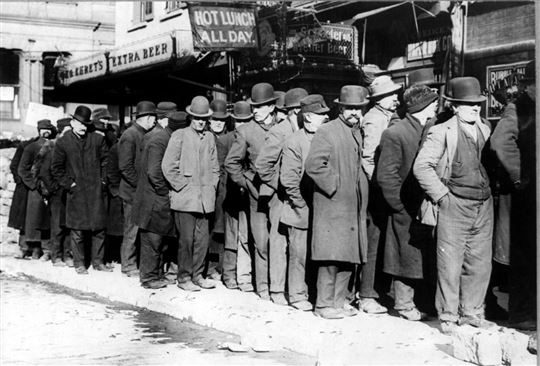 In Loaves and Fishes, Dorothy says about you, "Mary regarded me as her mother." What kind of mother was Dorothy Day?
A spiritual mother, but also really the ideal substitute because my mother and I had a very distant relationship. My mother and stepfather were highly critical. I knew that no matter what I did, I would not be good enough. But Dorothy really accepted me completely as the person I was. She didn't tell me I wasn't good enough, she did not tell me I should be other than I was; it was just total acceptance, which was new for me. It wasn't a huggy-kissy kind of relationship. The affection was spiritual, but sometimes when I was visiting with her, and before I would say "good-bye," she would want me to come and give her a little light kiss before I left. We would go to Mass a lot together, and also to the bookstore or to the doctor or traveling. Sometimes I would do secretarial work for her. I helped her in whatever way I could. After I got married, I might cook up a fish dinner and bring it in for her. One day, she said, "You're taking care of your old mother." This was a lovely thing to say.

Tell me something about Dorothy Day that few people know, but that you think people should know.
The writer Colman McCarthy said that she was "an indifferent mother." This is not true, and her daughter Tamar spent the last years of her life trying to show that it was not true. She was a very good, caring mother and grandmother, quite able to love. McCarthy hadn't even met her. Saints have to put up with things like that.

What are some other impressions of Dorothy that stay with you?
She was a religious genius who had a vast intelligence, able to speak about things and write about them. I never saw her lose her temper or heard her raising her voice. She once said to somebody, on the subject of anger, "I control more anger in five minutes than you would control in a lifetime." She had a spiritual discipline. She was able to live out her convictions. Anger leads to war and killing people; as a convinced pacifist, she knew that you have to start with yourself and do your best to curtail your anger and love your enemies. It's not easy. Dorothy also said some contradictory things to me personally which have been very hard to live with. For example, she told me one day after I'd lost my temper at someone, "You're one of the family whether you like it or not." A few years later, I was still living there and not doing much for the Worker (I was studying for a master's degree in medieval studies). She said, "Well, it isn't your vocation. Painting is your work." So I got a mixed message and I have not known what to do with that mixed message.

She encouraged your creativity…
Once she asked me to paint a little miniature of St. Nicholas for her because she had a grandson named Nicholas who was very sick and who did die. She said she wanted a reminder to pray for Nicky. Of course, she didn't need to be reminded, but it was her way of giving me something to do. When Dorothy died, she wore it in her casket.

You've also painted a portrait of Dorothy herself, and when you pray you refer to this portrait.
When I pray to her, I don't pray with words very much, but I have said, when I look at my painting of her or a photograph, "You are my mother; I need help." Or simply, "You are still my mother."

Is there a relationship between the Catholic Worker and Communion and Liberation?
Dorothy and Fr. Giussani both spoke about the importance of human freedom. "In the beginning of the work, probably the most important word was freedom." Yes, freedom is the primacy of conscience and we are free to be who we are designed by God to be. I sometimes am concerned that there may be too much freedom around the Catholic Worker, although we rely a lot upon personal initiative–ideally, the guidance of the Holy Spirit. I think it's really important that you have meetings and that you're unified. While the Catholic Worker seems to be a meeting place for the poor, CL seems to be more for the middle class. An elderly Jesuit said to me a long time ago, "It's the middle class that saves culture. The poor aren't able to do very much, and the rich don't care." But the middle class is able to save the culture of countries–this strengthening of the Church in the context of the middle class is terribly important. It doesn't happen to be what the Catholic Worker is doing specifically, but it is not separate from it.

What's the current status of the Catholic Worker?
Peter Maurin died in 1949 and Dorothy Day died in 1980. People thought, "Well, once she's gone it will all be over." It is not over. As Dorothy said to me privately, in her bedroom, about two years before she died, "It is the work of God and it cannot be stopped."