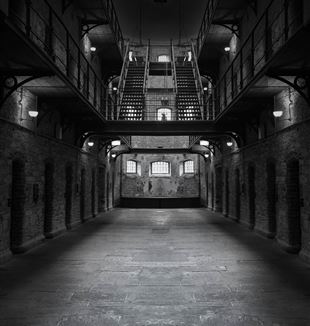 Youssef’s sentence was to end in 2017 but, unexpectedly, he was released. Bledar knelt in front of everyone to ask for Baptism. Elvin said he doesn’t feel like he’s in prison. Here are a few testimonies and the story of what we saw during a day among friends in the Due Palazzi Prison of Padua, with songs, a soccer game, and a big party. An experience that begs the question: “If it can happen here, can it happen anywhere?”

Goal! One to one.
“I should’ve played.” With his leather jacket and his baseball cap low over his eyes, Elvin has a hard face, and seems angry there on the side of the field. You’re almost afraid to ask why he isn’t playing. “Tomorrow, I’m on the 6:00 am shift. I have to make Easter cakes, and make them well.” He smiles, knowing he’s surprised you. “Yes, Easter cakes,” he says, with a strong Eastern European accent. “This is what I do to challenge myself. I never worked before. I lived the cool life, but I was a slave to everything. Today is the first day I’m happy here. It doesn’t even seem like I’m in prison.” He laughs, thinking that if he were outside he’d want to come inside on purpose. “Because today has been beautiful. No. Beautiful is saying too little.”

That morning in the Padua prison kitchen where Elvin mixes up the batter, Fr. Eugenio entered with his arms wide open, shouting for happiness. He hugged Giovanni, Franco, and the others. He came here to meet some friends with other friends, just like you’d do at home. No matter that to enter here they frisk you and you pass through a series of deliberately identical corridors and gates designed to disorient people. Fr. Eugenio Nembrini met the prisoners of the Due Palazzi prison at the Meeting of Rimini, where some of them went for the first time in 2008, and returned in 2009. From then on, the bars haven’t been able to stop the fire of a spreading friendship that has been making this place a home and making time positive, here where time coincides with condemnation.

Everything began with the Giotto Cooperative (see Traces no. 1, 2006), which gives work to prisoners. Then, this initiative overflowed, and you feel it when Maurizio, big and massive, hugs you so hard you’re almost crushed, happy as a child because after 15 years he’s finally seen his little brother again, on Skype, and found himself before a man. In part-time detention now, he’s gotten a computer. He was jailed before ever seeing a computer, and didn’t even know how to turn one on. Now, he’s completed a computer course and has downloaded the Rimini Meeting videos, watching them over and over. “It helps me because it’s tough. The thought of what I did is a wound that never goes away. Before, I didn’t realize anything. At the trial, I laughed. They tell me that the Lord forgives, but at times your head is overwhelmed by everything, and you don’t see anything. However, there are moments when I think it’s true, when I see good coming out of my heart. This never happened before.” He feels like crying, but applauds loudly, because the party is beginning.

What has happened to you?
Today is a special day, and there are friends from Milan, Naples, and Rimini, because Bledar, a Muslim, is becoming a catecumen, having asked to begin the journey to prepare for Baptism. He will be called Giovanni from now on. He is celebrating with Umberto, who is preparing for his first Penance, Communion, and Confirmation. The Mass together with everyone is in their honor, as is the buffet, the cake, and the party. “The last time I saw my brother, he asked what had happened to me,” recounts Youssef, waiting in line for some cake. Last summer, he went to the Meeting, asking his imam in Morocco for a special dispensation for Ramadan, which fell in those days. “Since going to Rimini, my thoughts have changed. Seeing that someone cares about you without asking what you did, this opens you.” Otherwise, you only have the suffocating thought that your sentence ends in 2017. “Don’t be afraid, because you’re not alone. God is thinking about you,” a friend repeats to him, today, taking his hands. Youssef nods, and enters the prison auditorium with everyone. He has no idea of the huge change that’s about to happen to him.

The party begins with photos of the flag-covered caskets of the Italian soldiers killed in the Nassirya massacre, with the words of Fr. Giussani quoted on the Italian Channel 2 News coverage of the funeral in November 2003: “Fear or contempt of the Cross of Christ will never allow participation in the joy of taking part in a popular celebration.” On the auditorium bleachers there are about 80 prisoners and just as many friends. Nicola Boscoletto, the director of the Giotto project, shows the video of the meeting with Margherita (the widow of the serviceman Giuseppe Coletta who died in the Nassirya massacre), who visited the prisoners before Christmas. “We have to trust the Lord.” She speaks of her husband, her son, and their pain, and her tone has the strength of a victory. “Death is not the only thing that hurts, but with Him in our hearts we can be free.” What hurts is the limitation of things. But it is reached by a presentiment of a life that has a greater chance: “I’d like to give you everything your heart desires, but since I can’t do that, I’ll pray that God will give each of you the love of Christ.” We can’t begin to fathom all the meaning that lies in her words, but just listening to her, you feel all the breadth of your own heart.

“Celebrating means an awareness of yourself,” says Nicola. “I am nothing, and a nothing can’t help another nothing, but Someone has reached out to take care of me, of us.” You see a woman who, following her life, has come this far to give comfort to these convicts. You see people together here who drove from far away, or who were escorted from their cells. A friendship grows without ulterior motives, among people who have nothing in common and everything to share. Then you listen to a letter (on page 17) from Ye Andrea Wu, a young Chinese man who served his time and began the journey toward Baptism. He’d asked to return to prison for this party, but had been denied. So he wrote his friends about the miracle that bowled his life over. Everything in life that can go out of focus, even just out of habit, is new, in his words. “Where, how, when it happens, we don’t know before,” says Nicola. “Here, it has happened.”

“This is our competition.”
The songs begin, and everyone in the stands lets loose. Somebody shows up from the kitchen, untying his apron and running to grab a seat. Nobody notices the bustle at the auditorium entrance. Nobody could imagine what is happening on the other side of the door. It opens: Youssef is released. Out. Free. The order from police headquarters has just arrived. Youssef must leave prison immediately–not in 2017, but now. There’s not even time to say goodbye, but everybody is already applauding. He’s crying and others are crying with him. They run down from the stands to hug him even for a second, happy as if everyone were leaving. “This is our competition: not about who is the first, but who will let the other be first.” Watching them, you’re reminded of this sentence written at the head of the Mass song sheet, a quote from Saint Gregory Nazianzen, speaking of his dear friend, Basil the Great, a bishop and saint like himself. “We were together,” writes St. Gregory, “as if by agreement, but in reality, because of divine arrangement.” Looking at the faces of those hugging Youssef, you see men touched by grace. The principle was the same for Gregory and Basil, the same seed, which grew in them and reached sainthood.

It was because of Youssef’s work in prison that he was able to hire a lawyer, and begin his appeal. Now, unexpectedly, the verdict has arrived, a reduction in his sentence and his immediate release. How can you not think of God? “We hope we’ll never forget entirely,” were Nicola’s words a few moments before, and they seem to be a wish for Youssef, for everyone. “Forgetfulness and distraction wrap up our days. They wrap them up. But if we’re truly free, that is, serious, loyal, with what we’ve experienced, the road will never stop being beautiful.”

Before the soccer game, prisoners vs. guests, there’s singing. Among the prison guards, there’s a woman, neatly dressed in her blue uniform. She’s standing with the other guards with her hands behind her back. You can see that she’s moved. While everyone is still singing, she approaches Fr. Eugenio, sitting on the floor, and takes his hands, saying, “Unfortunately, I have to leave because my shift is over. But I want to thank you, thank you...”–and she dashes off. It is His presence in reality, very simple, where nothing is simple.

With Open Arms
At the morning Mass, Fr. Eugenio had prayed for the guards as well. He requested a “Glory Be” for all those who work in prison and their families, “with gratitude, because if they weren’t here, we would not be here,” he’d said. “What we see today wouldn’t be possible,” adds Nicola. “It’s possible because everyone, from the prison administration to the judges, do their work with good will. If each person does his job seriously, a greater good will inevitably come forth.”

On the drive home, my heart thrums with gratitude for having seen Bledar, condemned to life in prison, beginning the Christian journey during the morning Mass, accompanied by his sponsor, Franco (he, too, serving a life sentence). The other prisoners on the stands watched as Bledar knelt, with the face of a child, answering surely and seriously the question of what he asks of the Church of God: “Faith.” Asked what faith gives, he answered, “Eternal life.”

A chill runs down my spine watching a man kneeling before God. “How many times in his life has he knelt, and before who knows how many things,” says Fr. Eugenio. “Today, he’s kneeling in front of the Mystery who waits for you all your life with open arms, as wide open as possible... waiting for you.”