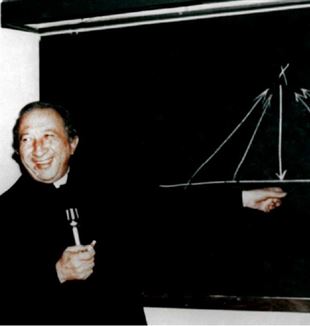 The doctorate in Cambridge, marriage, the work on the English editions of Fr. Giussani’s books... Every step taken was lived in light of the relationship with the fascinating Italian priest. Five years after the death of the CL founder, a Professor of History in Montreal recalls his friendship with him and the fruits it still bears today.

I first met Father Giussani without knowing who he was. I arrived in Cambridge in late 1983 to take up a post-doctoral fellowship. Though I had always taken Catholicism seriously, I was becoming increasingly unsure of its significance for me. Even if I did not like the idea of community–being a good individualist I thought that was for the more effete type–I nonetheless felt a need for friendship. Thus, my first encounter with Father Giussani was on November 30, 1983, when I met the gaze of Ana Lydia, a doctoral candidate in Cambridge. We spoke for only a few moments at noontime, after Mass, and I was struck by the strange, mysterious way in which she looked at me and at all those with whom she spoke. I wanted to know more. Why was she the way she was? She would tell me more in due time. If I saw something different in her, it was because of her friends, and it was, above all, because of the man she had met a few years earlier, Father Luigi Giussani, she told me.

The friendship between Ana and myself went from a dear friendship to something more serious. Yet there was a hesitation, as Ana was in the novitiate of yet another strange thing I had not heard of, the form of consecrated life known as Memores Domini. At one point, she understood she needed a judgment from Father Giussani. I knew what he would say. He was a priest, after all: “Avoid the temptation of leaving your vocation. Don’t bother seeing this fellow again.” You can imagine my reaction when Ana Lydia told me what he had said. She had offered to go back to Brazil and to no longer see me. Father Giussani retorted: “No, you should remain in Cambridge and finish your studies. And you have to go to the depths in your friendship with John, but always with an eye on your vocation.” I was stunned. I could not believe that a priest would ever say that. I realized at that moment, with a clear awareness, that Ana Lydia belonged to Christ.

A New Horizon
I also understood that this path that Father Giussani had begun, this strange movement called Communion and Liberation, which I had resisted until then, was the path for my life. I subsequently had the great fortune to meet this man, in whose presence I always felt myself to be before the Mystery. When I met Cecilia, my future wife, and asked him for help in discerning what was being asked of me, he told me that an intuition had placed us together but the intuition had to become a task. At our marriage, he reminded us that marriage was for the mission; it was for the building up of His kingdom. Again, he surprised me with the way he opened up my horizons. My life, my marriage, my work, everything had a greater weight; everything was for the world, for an Other.

I arrived back in Canada in 1985 and, a few months later, Father Giussani came to visit. In preparation for the visit, I asked him what kind of meetings I should organize, which people he should visit, etc. He became almost irritated with me. “No meetings! I am coming to visit you.” I could not believe this. A person responsible for a movement with thousands of followers would come to my country only to visit one person! It was another way of looking at reality, well beyond my paltry perspective. When he arrived in Canada–but even before that and after that–I would ask him about things that I might do to make CL better known to others. He always gave me the same answer: “Do it only if it is something that you will love to do. Do what is important for you.”

And so I began to learn that the life of the Movement and the life of the Church had nothing to do with a self-assigned imperative, but had to do with following an attraction. Fast forward to 1996. I had been asked the year before to see if there was any possibility of publishing any of Father Giussani’s books in English. I spoke to a colleague of mine, an academic publisher, and floated the idea with him. He immediately saw it as a great opportunity. For me, this seemed simple and straightforward. I met Father Giussani for lunch at his home in Gudo, Italy, in mid-November and stayed a few hours with him afterwards. He asked me a few times how it was that I was able to get the books published. I had to tell him the story again and again. He made me understand that what I had taken for granted was something mysterious for him. As he put it, “Christ is at the origin of all this.”

If there is one thing that struck me about what Father Giussani said to me, it was his constant emphasis on loyalty. A few times over the years he stopped in mid-thought or mid-sentence to thank me for my loyalty to the experience of CL. I don’t say this from any sense of vanity; on the contrary, when I think of all the betrayals, I can only experience a sense of humiliation and shame. Rather, what struck me was “Don Gius’s” seriousness, the grave expression on his face as he said this.

Despite my Fragility
And yet, all I can say is that before such a man it was easy to be loyal. It was as if, despite any fragility of mine, a grace was given to me. And so ever since my first encounter with him, through Ana Lydia’s gaze, his meeting me on a cloudy late afternoon to talk about the prospect of marrying Cecilia, his trip to Canada, and many other episodes, my life was turned upside down. I consider myself to be the luckiest person in the world because my inclination to a duty-bound moralism toward myself and others, my fundamentally sentimental outlook on life, my subtle yet deep-seated sadness were all swept away by a loving gaze on my life. His friendship introduced a radical newness to my life, which allowed me to have a new affection for myself, a seriousness before my work, and an appreciation for reason. And my life has been an adventure ever since…