“The reduction of reason?” Ol’ga Sedakova weighs the words, pauses, then resumes, “It’s not just a current topic. It’s the true problem of our civilization.” A professor in the History and Theory of World Culture Department of the University of Moscow, Sedakova explored this “problem” in her new work, A Defense of Reason. Based on the title, one would expect that she is a philosopher. But no, Ol’ga Sedakova is a poetess, one of the most highly regarded in Russia, whose verses, published from the United States to China, have garnered such honors as the Vladimir Solov’ev Award in 1998 and the Solzhenitsyn Foundation Prize in 2003. Through her pen, the great poets and writers speak Russian, from Dante to Rilke, Claudel, and Eliot. Orthodox, she can boast a singular privilege: John Paul II invited her many times to his “Solov’evian gatherings” in his apartments, conversations at table with a group of intellectuals from Moscow. “With Dostoyevski, we continue to hope that beauty will save the world,” he augured one day, greeting her. “We became friends. When he asked me for a collection of my poetry, I thought it was just a formality. Instead, the next time he told me that he read them every day. Notwithstanding the differences, there was a great closeness–maybe because he was a poet, too.”

In a civilization in which reason seems to dominate unchallenged, why do you feel the need to defend it?
I want to defend it from its reduction to technical rationality. What triumphed with the Enlightenment was not true reason: it was reason detached from the integrity of the person, functioning as if unseated from man and his sentiments. Ours is not reasonable civilization; it’s rationalist. In the things that count, it’s stupid, while it’s intelligent only in regard to what is secondary.

What is reason, in its fullest sense?
Since antiquity, in the Greek and Judeo-Christian tradition, reason has been understood as wisdom, as sophia: not a cold analytic exercise, ratiocination, but the possibility to enter into a profound relationship with the surrounding world and with ourselves. This reason is awareness of one’s own limitation and of the existence of the sphere of mystery.

Thus, a reason that isn’t opposed to faith…
Anything but. Aleksandr Pushkin, the great Russian poet of the 19th century, understood this well, rejecting atheism precisely because intelligence required him to do so. He wrote, “Not admitting the existence of God means being even more stupid than the peoples who held that the world rests on a rhinoceros.” The great artists like Goethe or Pasternak always intuited that reason was something broader than this reduction.

And how did you discover it?
At the university, where I met Sergej Averincev. Philosopher and theologian, translator and poet, he was a great humanist [Sedakova dedicated the last chapter of her Defense of Reason to him]. But above all, for me, he was a respected teacher and a friend, up to his death in 2004. Half of Moscow came to his lessons in Byzantine Aesthetics. We young artists were battling the intellect, thinking that it suffocated sentiment. With him, instead, we understood that actually we didn’t know what it was. Presenting a contemporary poet or a Father of the Church, Averincev always started out from an idea of reason that was new for us: an integral reason, bound to the heart of the person, as in the Bible. He was the first to rehabilitate reason in our eyes–not in the abstract, but making us personally touch the way it functions.

What is the value, today, of this battle?
Our civilization depends on it. It’s afraid of any certainty. I spoke about this recently with Cardinal Christoph Schönborn, the Archbishop of Vienna: when we studied the dispute between Socrates and the sophists, the class rooted for Socrates. Now, instead, the sophists are considered the wise ones. We moderns have killed Socrates a second time, and this indicates that there is, above all, a problem of education. 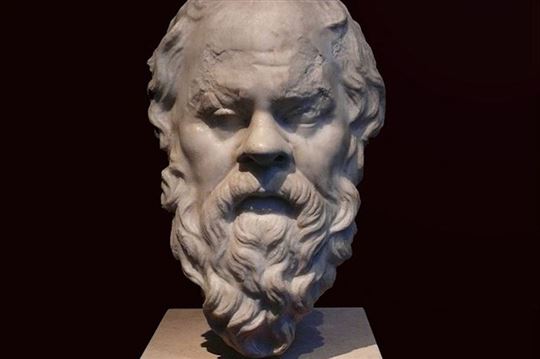 What do you mean?
It’s an emergency I clash with every day in the classroom. Once I explained a passage in which Pushkin wished his woman: “I have loved you so sincerely, so tenderly/as may God grant you to be beloved by another.” Some of the students raised their hand. “It’s ironic, right?” Nobody could believe in the existence of such a pure relationship. In another lesson, we read some verses in which Pushkin likens himself to a gondolier in Venice and concludes, “I sing for amusement, like him, without echoes…”. I asked, “Have any of you ever done anything not for money or power, without ulterior motives?” Out of thirty, only one student said yes. In the others, again, the same cynical incredulity, as if nobody believed in love or friendship anymore. Along with reason, values are reduced, and there only remains utilitarianism, where poetry can find no space.

Pushkin, Dante, Goethe, Pasternak... Why did you choose to dialogue with poets in your book?
Because with them you can talk about the fundamental things in life: freedom, meaning, free will, the heart… Instead, these things too often fail to interest contemporaries. This is why I’ve always felt close to someone like Dante, even though Soviet culture passed him off as a museum piece. When I read the Divine Comedy at university in Russian, I sensed that there was more, so I went to a junk shop and bought an Italian edition under the counter and studied the language. In the living voice of Dante, I discovered a sensibility that was familiar to me.

Doesn’t it seem paradoxical to you that a poet, not a philosopher, should battle to defend reason?
Many are surprised, thinking that poetry belongs to the sphere of the irrational. But the great poets are precisely the ones who defend reason, the “new intelligence” of which Dante speaks. The opposition between reason and the heart was only born after reason was separated from the fullness of human life: thus, the former was identified with a cold analytical principle and the latter as pure emotions. But a heart without reason sees only ghosts.

Examples?
Just think of contemporary art. The results are before everyone’s eyes: performances with trash, nightmares, works full of panic… I have the impression that Western culture is in the grip of the sleep of reason. Banality reigns everywhere. It reminds me of the prestigious Poetry Festival of Berlin, where I went this summer. Only three poets still used words in their compositions: all the others blew in the microphone, used synthesizers, made noises, or jumped.

The death of reason drags language down with it as well, as if there were no longer an experience to express…
For me, it was a tremendous sign: in the place of words, there remain only empty sounds. Living something is not the same thing as having an experience of it; it’s not enough. My students can sit and listen to me, but it’s not yet experience. It depends on how you place yourself–you have to be there, with your whole self. Experience is a giving of yourself unreservedly. You can’t understand something by staying off to the side. That’s another illusion of modern reason: claiming to know something without participating in it. In Russia we see it well: with all we lived through under the regime, we still haven’t understood what happened to us. How did we come to such excess? How did we leave it? We felt it in our own skin but it’s still not an experience.

When you were awarded the Solzhenitsyn Prize, you spoke of the “need for an interior liberation.”
As the Metropolitan Antonij di Surož said years ago, “After our experience, we have something to say to the world.” Far from the impossibility of poetry after Auschwitz! But this possibility will only be for those who in this “us” can say “I”–not “I” as a victim of history, but “I” with a first and last name, “I” personally.

The revolutions and tragedies of the twentieth century have demonstrated what reason become unreasonable can lead to. Today, what risk do you see?
We have to face a new ideology, more elusive but not for that reason any less totalitarian. I don’t know how many people realize it; it’s not simply a matter of consumerism. Man, traumatized by the events of the twentieth century, sees danger in every truth. He will entrench himself in a world built to his measure, where there is no longer place for miracles, the supernatural, for what isn’t logical.

It’s an entirely artificial reality…
But it can’t last: can anyone live without a certainty to affirm?