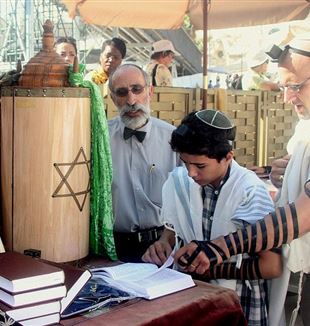 It used to be easy to be a high school rebel: Long, greasy hair (sigh), cigarette dangling from the corner of a mouth (cough, sigh), maybe some pot (cough, cough, passé)–But today? We live in the age of Don’t Ask Don’t Tell; even in my traditional Jewish Modern Orthodox high school, it is conformism through cooptation. Let it be, I imagine them saying.

There they were. Our doppelgangers. Christian teenagers in schools just like ours, but in our world they were as invisible as Ralph Ellison’s invisible man in racially split America. This was no glass ceiling; it was a glass wall. More like cement actually. Like a toilet stall–you are not meant to peek in. But I wanted to...

I wondered–why all the cover up? For some reason, it was unacceptable to seek out and speak with Christian youth. What puzzled me was that my school, by all other accounts pretty open-minded–for a Jewish day school–seemed closed off, or even scared of this idea. When Shira, my collaborator, and I first proposed the plan, the student affairs advisor told us to keep it a secret, so as not to create a big stir.

Now, I’ve always been somewhat rebellious–willing to push the envelope, in class, in my artwork, or in any setting where I sensed something being covered up. I’ve learned that provocation can force people to confront their hidden beliefs. But here we had to be more delicate. I was excited by the idea, burning to jump ahead and create open dialogue, discuss Christianity, a world of religion that I had read about in textbooks but to which I had never been exposed. I wanted to hear first-hand about how other religious youth my age lived their lives. I must admit, I couldn’t help but smirk when imagining the event appearing in the school newspaper; the mixed look of surprise, anger, doubt–or maybe pride–on the faces of the rabbis and parents. But even some of my peers were hesitant; they were uncomfortable talking to Christians, disturbed by the Passion just like their parents.

My faith is unshaken but I feel it will be strengthened if it engages with the world, breaks down the walls of self-imposed ghettos, and has the courage to face difficult truths. What were people afraid of when skirting away from interfaith dialogue? After all, my friends are all planning to attend secular colleges–Ivies, Liberal Arts, state schools–won’t the challenges to faith be greater there? My school, in typical Modern Orthodox fashion, was caught between pushing its students into the best colleges possible, New England Prep, while desperately inculcating values opposed to modernity and secular academia, Volozhin Yeshiva. What was so inflammatory about Christianity then? Weren’t Christian high schoolers exactly the kind of people we should reach out to, on “our” side, rather than “theirs”?

Convincing the Rabbi Principal wasn’t easy. Shira and I could tell he was excited intellectually about the project, but also afraid of the public backlash. It was frustrating because his considerations were about “what the neighbors would think.” How could we rationally convince him otherwise–the fear seemed irrational. Visiting their school was ruled out. That would be inappropriate, to stand in a chapel beneath the Cross–learning about Jesus’ life, teachings, and love. I grinned at the thought of yarmulke-wearing yeshiva kids staring up at the Cross, learning about different approaches to faith. In fact, many in my school believe it is forbidden by religious law to enter a church because it’s considered a house of idol worship.

I suggested we jointly watch Mel Gibson’s Passion to make the discourse accessible, but also act as a basic primer for Catholic theology. Plus it depicted the concept probably most offensive to many Jews, and yet, most meaningful for many Catholics. It was perfect. Fostering new understanding, breaking down walls of ignorance. That idea got rejected too. Nervous about the intensity of the subject matter, the administration preferred calm, easy-handed discussion. Eventually the Rabbi Principal came around, not without opposition, hoping my class would benefit from the fruits of “mutual understanding.” He was still nervous.

Finding a Catholic school was easy. In the 1960s, the Holy See released the Nostra Etate proclamation, affirming the theological value in all world religions, especially Judaism. I could only think of my community’s equivalent, Confrontation, an article by Rabbi Joseph Soloveitchik, the founding father of American Modern Orthodoxy, which strictly forbids theological dialogue with other religions, especially Christianity. I was unfazed, however; this was what the project was about. Rebellion.

We found The Heights School, an all-boys Opus Dei Catholic prep school in Washington, D.C. They were thrilled by the idea. They lauded our common goals of excellent secular education coupled with committed religious faith. Dozens of e-mails and phone calls later, we convinced the Witherspoon Institute at Princeton University to host the event. They even provided free kosher food.

The bus seats were cold as we sat down. It was raining the whole ride from Riverdale to Princeton, although I could only sympathize with The Heights students coming all the way from Washington. I was nervous. This was it.

They arrived, all-boys in blazers and ties. We, a co-ed motley crew, dressed in jeans, skirts, polo shirts, and modest elbow-covering blouses. As we walked in, I could see a few of them lagging behind–grungy, adolescent, cracking jokes and snickering. Rebels. Though not very theologically interesting.

In fact, for all the give and take, the paranoia and subversion surrounding the project, our Catholic counterparts were pretty normal. There was nothing overtly “holy” or “mystical” about them. They certainly weren’t idol worshipers. Although the discussion was serious and some differences real, we saw that they were just like us. They were teenagers–insecure, idealistic, a bit rebellious, or maybe conformist. Again, I couldn’t help but smile, this time not at the power of rebellion, but at the universality of our predicament. And yet this event would be uproarious back in Riverdale. We’d be on the front page of the school newspaper, spurning op-ed debates and discussions. Make no mistake: Judaism and Christianity are miles apart. But them? Us? Humans, all children of Sarah and Abraham. I imagined The Heights boys donning yarmulkes and getting on the buses back to Riverdale instead of us. Could anyone tell the difference? The glass wall that I mentioned before… more of a mirror.