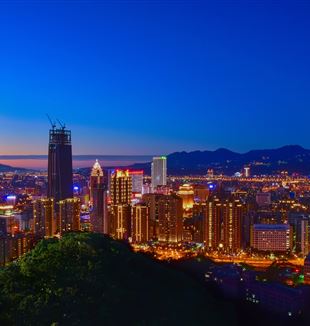 When he arrives, he is announced by the metallic sound of his three-legged stick. He carries it with him, dragging it from the entrance of the church to the first pew, where he sits because otherwise he would not manage to understand anything. Xiao Bei Bei is 83 years old and almost deaf. He fought with General Chiang Kai Shek, and along with his stick he carries a story as long as the journeys he has made in the course of his life, begun in the heart of China when they didn’t yet speak either of Mao Tse Dong or of Communism. He saw them all: the warlords, then the Japanese invaders, then the Communists who in 1949 forced him to move to the island of Taiwan following his general and all his army. From that time, he has lived in memory of his homeland, which he has never seen since. One memory is stronger than the others. It is of when he was young and there was that foreigner, tall and kind, who taught English to him and his friends. “I am not doing it for money,” he said. “I teach free of charge, but on the condition that you ask yourselves why I made such a long journey to come to this faraway place to teach you English.” It is thanks to that priest that the young Xiao got to know Christianity. It was the encounter with a stranger who becomes your friend and traveling companion, who teaches you his language but, above all, teaches you that there is something more ancient than the history of your great nation, more ancient than the questions of Lao Tse and the sayings of Confucius. It is the desire that animates the heart of every man and that only Christ can answer.

Magnifying Glass
One day, that soldier–he had spent a few years in Taiwan–decided to take a long journey. He took a plane and reached the East Coast of the United States. He got a car and took a road that passed through a large area of deep snow and reached a town he hardly knew. When that priest, already an old man, saw him arrive, he was moved and said, “I knew one day you would come to see me!” The soldier said to him, “Shén fù [meaning “priest”], I made this journey to tell you only one thing: thank you.” Today, Xiao Bei Bei arrives every morning with his three-legged stick. Often, he is late and walks up slowly to reach the first pew. He hears little, and doesn’t see very much–in order to read the Chinese letters, he uses a large magnifying glass, but at the end of every Mass you can hear his voice clearly say, “Thank you, Shén fù.” It is as if every day he was making that long journey again to say thanks to the one who had taught him the most important thing in his life.

That American priest is no more, so he thanks the three priests of the St. Charles Fraternity, Fr. Paolo Cumin, Fr. Paul Costa and Fr. Emmanuele Silanos. He knows very well that they, too, are there for the same reason that brought that priest there so many years ago. They run the small community of the St. Francis Xavier Parish, on the outskirts of Taipei, and they teach in the Italian university. They meet up with their students, who know nothing about Jesus, and translate Fr. Giussani’s words and method into Chinese. So it was that Maura, Bruno, Veronica and Giuliana (these are the Italian names they have chosen) and many others began to ask questions that they never asked anyone before. Then some, like Valeria and Caterina, began to go to Mass.

Taiwan is an odd place, full of contradictions. Politically, the inhabitants of this island are divided between the Blues, who favor re-establishing relationships with “mainland China,” and the Greens, who dream of an independence that will probably never come. Staying here, one has the impression that Taiwan is more and more attracted to the sphere of the mainland. It is in the order of things that this should be so, with the transformation of the economy of the People’s Republic. Over the past decades, Taiwan has been like a huge American aircraft carrier one step away from China. But does it still have the same need today that it had 30 or 40 years ago?

“Come and See”
Their religion is a mixture of popular superstitions, Taoism, Buddhism, and Confucianism; but the most important thing is the worship of the dead, veneration for the ancestors typical of all pagan traditions. Mrs. Gao, too, comes to Mass every day. She is married with two children, and she teaches German at the university. Eight years ago, she decided to become a Catholic because the Protestants do not allow rites in honor of the ancestors, while the Catholics do. Her relationship with religion has always been rather sentimental and individualistic, until she began to translate The Religious Sense. At first, she found it tiresome and difficult, but then she discovered that no one had ever spoken so directly to her heart.

The Diocese of Taipei was established in 1952, but it is as if we were still in the time of St. Paul, the time of the Apostles, when the Church was founded. Like then, Christianity met with paganism and superstition. There are many other ethnic groups present, apart from Chinese. There are 13 aboriginal tribes. Mei Xiang is an aborigine. She is 30 years old, a good looking girl who married an aborigine of another tribe a few years ago. He was a Catholic, but she wasn’t. Her aunt was the village medicine woman; people would go to her when they wanted to take revenge on someone. Her aunt told her: “You can marry that man, but for goodness’ sake, don’t become a Catholic.” Two years ago, Mei Xiang moved to Taipei with her husband and child: “I often felt weak and sad. I would see my husband and his family, their faith, and the certainty they had. They gave me the strength I was lacking. I asked myself, ‘What have they got that I don’t have?’ One day, my husband asked me, ‘Would you like to try coming to Mass?’ As if to say, ‘Come and see.’” So Mei Xiang got to know Fr. Paolo and the priests of the Fraternity. She discovered a family larger than her own, where she was helped to discover the beauty and the meaning of her life. How far removed was this from the religion of her village, the religion of her grandmother, consisting of fear and witchcraft! She asked Fr. Paolo for Baptism and she received it one year ago. I heard her witness. When she spoke, she wept with emotion: “Although I am no better than before, now my life has a meaning, the gratitude for my new family, who taught me a new way of looking at myself, at my life and the lives of others. This is what I want to say, ‘Thanks to God for introducing me to these people, and thanks to those who introduced me to Him.’”

Jesus Speaks to Everyone
Every time I meet people like these on my travels, I understand more and more that Jesus has a word for every person in the world. He remains Himself, but is able to speak to every person in a different way. I told these friends of the Movement (Julie, Steve, Naomi, Claudia, Vincenzo, Simona and Eleonora...) how I often spent the nights awake, because of the jet lag, and at four o’clock in the morning I could hear people beginning to prepare their stalls and slaughter the animals for the market at the center of which our parish is situated. I would think of all those people and all the other people in this place and in the whole of China who have not met what I have met. Why am I here among these friends of mine? Why did I come here? So that these people in Taipei can meet what I have met, because there is something more painful than to live with a pain, and it is to live without knowing why you are living. This is the most painful thing of all.

We are sent to all men so that they might know why they are born and why they are living. We are called to be the voice of Jesus who speaks to everyone, through the proposal that has moved our life, a proposal that expresses itself in a gratuitousness capable of that patience which is the patience of God and a proposal that is born first and foremost from gratitude for what we have met–the same gratitude that that old American priest had; the same gratitude that moves that old Chinese soldier: “Thank you Shén fù.”