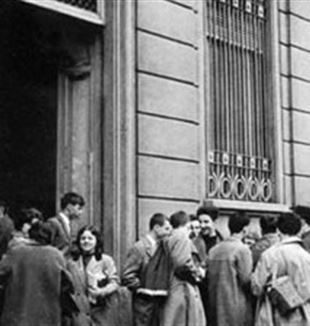 Milan, Italy, November 1963. The tolling of the bell echoed in the corridors. “Okay, it has begun,” Manuela thought to herself. She looked at her new classmates; so different from those at the school she attended until last year. Then, due to a series of circumstances, her parents had decided to have her finish her last two years of high school at the Berchet School in Milan, where they knew the headmaster Yoseph Colombo and some of the teachers. She gathered her books and got ready to leave with two of her classmates, all of them exempt from the religion class. Too late, the teacher had already arrived. He was a thin little priest, who, after a few minutes, thundered from his desk: “The truth is one!” Silence. Manuela raised her hand: “Pardon me, I do not agree. You have yours, I have mine. Each has his own.” Silence again, no one answered. The priest carried on, spoke, tried to break through the patina of indifference that seemed to cloak the young people in front of him. Manuela was upset by their silences, by their comfortable apathy. How different was the climate she had breathed in the Jewish school, where diverse ethnicities and languages lived side-by-side, even from a religious standpoint. There were very observant students, who always gathered to pray in an oratory on Cellini Street–so that they were known as “the Cellinians”–and those like her, a typical representative of the Milan bourgeoisie, for whom culture was everything and religion… nothing. And at home she breathed the same air. Her parents had demanded that the Jewish school instruct her from a religious standpoint, as a duty, just enough “to not lose the tradition, certainly not as rule upon which to build one’s life as a Jew.” Nothing more. And now at school that priest said that the truth is one! One reason for living, suffering, rejoicing. That priest was Fr. Luigi Giussani. Ten years earlier, in those very classrooms of the Berchet, he had given birth to GS (Student Youth), overturning the idea of Christianity that many had in the Italy of the 1950s.

Verification or comparison?
During a lesson a few weeks later, Fr. Giussani asked, “If I put myself in discussion with another person’s creed, what am I doing?” And Manuela answered, “A comparison.” And he, categorically: “No, a verification.” A verification? Of what? At the end of the hour, she pursued him down the hall in order to continue the discussion. And so went the rest of the school year. She did not always stay for the religion class, but there was something fascinating about that priest, something that did not leave people tranquil, beyond the fact that “he was indescribably likeable.” That is what Manuela Camerini Cantoni, whom we met in her Milan home just a few months after the death of Fr. Giussani, remembers today. “I, too, was at the Cathedral, to cry for his passing away. For a long time I had wished to meet with him, to tell him what had happened to me in all these years. And to thank him…”
Christmas 1964. In the entry way of the school a sign proposed a trip to Sicily, organized by GS. Manuela decided to participate, if only to avoid going with her family to Livigno near the Swiss border “to freeze.” She did not know anyone in the group, and through word of mouth she had learned of the raggio (the GS discussion sessions) and little more. On December 27th, they departed by train. There were 25 people on the trip: a married couple, a girl scout, some students from the Berchet, and Cesare, a university student studying political science. She immediately formed a friendship with him, which would last throughout the years. Leading the vacation was Fr. Emmanuel, who was linked to Fr. Giussani from the very first years of GS. “I learned later that Fr. Giussani had advised him to be careful about what he said because there was a Jewish girl present. I did not take it well; it seemed to be a censure. Then I understood what he meant to say: ‘Be careful not to hurt her; we must have a minimum of self control out of respect for the other.’”

The retreat in Assisi
After that vacation a period of anxiety began for Manuela. Nothing was like before. School went badly, but she did not care. Her interest was elsewhere. But where could she rest her heart? Where could she find answers? Almost every day she spoke to Cesare. Every so often on Sunday mornings she would go to the Church of Santo Stefano to hear the songs of GS. At Easter, she participated in a retreat in Assisi. There were 250 present. Fr. Giussani introduced her with these words: “This girl is Jewish. We must be very grateful to her parents for their generosity.” Manuela admits, “I did not understand what generosity he was referring to. And yet his message was clear: she is like tracing paper; they did not give her an identity with which to measure herself, points of reference. She comes to a reality like this, where the fascination is strong; she could even decide to stay. And yet her parents have had a remarkable openness of mind in telling her to go.” Giussani, having learned of her beautiful voice, even asked her to teach everyone the Hebrew song Hineh Ma Tov (a sung version of Psalm 132). They were five very interesting days, and questions crowded into Manuela’s heart. For the first time, she confronted prayer in a serious way. Fr. Giussani said nothing more to her. “He left me to flail about in my dilemmas.” Many more times she followed him down the hallways of the school to ask him questions and initiate discussions, until one day he suddenly replied, “You don’t know anything about Judaism! You cannot be Jewish just because your parents are. Start studying. Verify it yourself.” Manuela was furious. With a few words he had shown her a path, “the” path. “That is how he was. A Catholic friend of mine one day gave me this sentence a priest had said to her: ‘Give while you are passing by, don’t stop.’”

A continuous becoming
Giussani had done this and kept doing it: “He would make the remark, would toss out the phrase that undermined and unhinged every monolithic certainty and then…would leave–meaning that he would not stick around to talk it up, to convince you. But he stayed with us, and he did it in a pleasant way. The witty remark, the joke, the continual dialectic made him fascinating. He was a continual becoming.”
That year ended poorly from a scholastic point of view. Manuela failed. But her work on herself had begun. She re-enrolled in the Jewish school. “During the two years I spent at the Berchet, I had felt like I was outside of any type of community, alliance, or structure. I needed this to begin again or, better, to begin, thanks to the openness, to the verification that Giussani had taught me.”
That was just the beginning. She spent the following summer on a kibbutz, where a rabbi helped her with her studies. She would go ever deeper into her own roots. It was a long, at times tortuous, path in which the encounter with her future husband, an observant Jew, was fundamental. After the wedding, they moved to Jerusalem. “Those were difficult years and in that predicament too it was a priest who helped me. I felt suffocated in that environment, which was so religious. I returned to Italy and I went to speak with Fr. Castelli, who told me, “If all Jews were like you, they would have died out a long time ago. It is you who must adapt to your husband; his is an exact reading of reality.” I trusted and I believed him. Until that point my observance had been, let us say, out of pleasure: why deny myself the pleasure of my traditions? Now there was something else at stake. It was something in me that I had to examine, to study. And so it was. And I wanted this for my children, who are very observant. All because of that encounter at the Berchet School. For this reason, for all that I owe to Fr. Giussani, at his funeral I would have wished to sing Hineh Ma Tov for him again. But maybe the tears would not have let me.”

Where there reigns
love among brothers
the gifts of God