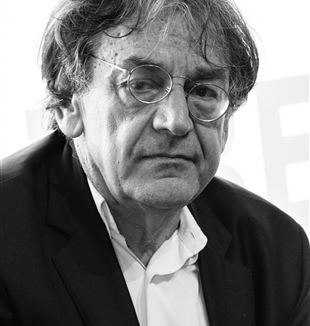 The laicist French intellectual closest to the spirit of the Meeting in Rimini, Italy, that has just ended is Alain Finkielkraut. His apologia of reality as “given” and of beauty as a universal that cannot be reduced to cultural relativity, contained in his latest book, L’imparfait du présent [The Imperfect of the Present], is consonant with “the feeling of things, the contemplation of beauty,” which was this year’s Meeting title. Finkielkraut writes: “Numerous threats weigh today on reality and the experience that man is called to have of it: the reduction to a virtual essence, to pure malleability, a vibration of feeling, a starting point for ideology, etc. All this is the consequence of modern man’s resentment toward reality as given. But what we need, in order to save ourselves and the world, is to feel gratitude and to honor beauty.” The following is the interview that the French philosopher kindly agreed to grant us.

Your latest book could be called a summation in defense of reality, which is today increasingly mistreated. You have written that “exposed to the permanent competition of the virtual and subjected to the ‘device’ of universal usability… reality is by now under accusation.” The “difference between ‘being’ and ‘being at man’s disposal’” would seem to have been erased by now. Where is this degradation of reality manifested, and what are its causes?
I give numerous examples in the book, even very minor ones. Today I would add another recent one: in Paris, the mayor had beach umbrellas, lounge chairs, palm trees, and sand placed on the banks of the Seine. What does this mean? That the difference between near and far has been abolished, that here is elsewhere and elsewhere is here, that the given no longer exists–mankind has decided to get rid of it in the name of the pleasure principle. Someone wants a beach in Paris, and so they create a beach in Paris; maybe tomorrow someone will decide to fit out Venice’s canals for a motorboat race or water skiing. This is the apotheosis of technology in the sense Heidegger gave to this word: not merely the whole of machines and motors, and much more than the instruments in man’s hands, but a precise world view in which everything is at his disposal. It is a transformation inscribed in some way in the great plan of modernity; it is the fulfillment of the idea that the world was made exclusively for man. At the height of this metaphysics of subjectivity, man no longer meets anything but himself, in the shape of his products and the whims he has managed to indulge. We may be living the end of reality as a given.

Why does the human feeling of things seem so impoverished? Because of an excess of instrumental rationality or out of a lack of love for reality as something other?
The two are connected. Reality as such cannot be reduced, but instrumental rationality has this that is attractive and dangerous: that it seems to be able to subject any kind of reality to the pleasure principle.
Thus, the boundary between care of the real and manipulation of the real seems to have been erased. This implies the question of meaning. Fifteen years ago, in your book La défaite de la pensée [The Defeat of Thought], you warned us that post-modernity brings about the annihilation of meaning, the reduction of human experience to feeling and of reason to a tool for manipulation. How can this process be reversed?
Clearly, an existential conversion is necessary, which implies the return to a feeling that has been completely forgotten, hidden, disfigured: that of gratitude. Cultural anthropology tells us that human sacrifice had, among other things, the purpose of compensating in some way for the excessive power man had assumed over things. Of course, no one today is asking to return to human sacrifice, but unquestionably there is a need to see in the given the miraculous reality of a gift.

Perhaps in order to reverse the process, it would also be necessary for culture to go back to being the space of the search for and expression of the universal: the good, the true, the beautiful. But you wrote that “it is right inside its sanctuaries that culture sinks into cultural lack of discrimination and its value of truth is denied in favor of the inoffensive relativity of values.” What do you mean?
I mean that Umberto Eco is mistaken to describe our situation as a new Middle Ages, in which culture, in the face of the barbarities of the cultural industry and the mediocrity of television, retreats into the universities just as in the past it retreated into the monasteries. This is not the case, because it is precisely inside today’s universities that the nihilistic theses of cultural relativism are cultivated. The contemporary face of nihilism is summed up in the phrase, “everything is equal,” and this doctrine is constructed right in the universities.

The universal goes out the door of culture, but comes back in through the window of the “universal jurisdiction” of the world courts. What can we expect from this? The finally unhindered triumph of the good and true, if not also of the beautiful?
I don’t think so. I believe that very noble sentiments lie at the origin of the international criminal court; there is the aspiration to see dictators punished for their misdeeds and even dissuaded from perpetrating them because this court exists. But I do not think that justice can take the place of politics and exercise responsibility toward the world in its stead. The international criminal court risks throwing more fuel on the flames of the conflicts because the temptation will be widespread to accuse one’s adversaries of crimes against humanity. But if the adversary is an enemy of the human race, then he can no longer be a legitimate adversary, and the conflict with him becomes implacable. I fear that this form of justice may erupt in a new radicalization of politics, a new transgression of the boundaries that in the past enabled people to distinguish an enemy from a criminal and thus to make peace with him.

We are living, it is true, in a time of cultural relativism, of post-modern nihilism, but we are also seeing a return to fashion of ideology, ie, of “strong thinking.” We have in mind the no-global movement, Islamic fundamentalism, etc. Do you see this too?
What is coming back into fashion is binary thinking: the reduction of human pluralism and the complexity of things to the scheme of only one alternative. There was a moment when we thought that hostility to every type of totalitarianism would have enabled us to come out of dualism and arrive at a practical wisdom, ie, treating every conflict as a case in itself. Unfortunately, this has not happened. Everything has become simple again; unswerving attachment to the cause of the world’s oppressed turns every political situation into a clash between oppressors and oppressed. This is the case of the no-global movement, and it was the case in France of the two weeks of “anti-Fascist ecstasy” that preceded the run-off in the presidential elections, in which Jean-Marie Le Pen was one of the two candidates. It is the case of the form that support of the Palestinian cause has taken: the Palestinians represent humanity, the Jewish state is guilty–in that it is a Jewish state–wof apartheid, racism, and ethnocentrism. And whether one wears the old anti-colonial eyeglasses or adopts a postmodern gaze, one ends up dreaming for them of a state with equal rights for everyone, as though Arafat, who would be called to govern it, were some sort of Habermas [an austere German political philosopher] with a kefiah.

Whatever is the case, what you call “the triumphant utopia”–whether political, that of the no-globals and the Islamic extremists, or scientific-technological, that of the biotechnologies–proclaims, just like the utopias of the past, that it will “free us from the prison of reality as given.” You reply that it will deprive us of the “given as present.” Why?
Because I believe that what characterizes modernity is resentment of everything that presents itself as given. And that there is no salvation for all of us except in letting go of this resentment, that is to say, in returning to gratitude. But this is a disposition of the mind that we find particularly difficult, ever since we live in a world without God–that is to say, in front of a given without the Giver.

To conclude, a couple of words on beauty and contemplation. Universal manipulation and the supremacy of the pleasure principle make the idea of contemplation anachronistic, while the culturalistic approach, with its relativism, reduces beauty to the banality of a cultural particularism. Do we really have to give up the contemplation of beauty? What will be the consequences of giving it up? Will they be more on the aesthetic or the moral level?
I believe they will be more on the aesthetic than the moral level. If beauty, as Valery writes, is a kind of death, and intensity, newness, and all the dynamic values prevail in its place, then this tendency will foster or aggravate the sinking of the world that we can already observe. Beauty is the call also to remember that not everything was made for us to consume and that appropriation must not be the last word. If we do not want to live in a world dominated exclusively by the unleashing of appetites and the clash of the needs of increasingly greedy and impatient people or groups, then it is necessary for beauty to continue to keep us at bay.