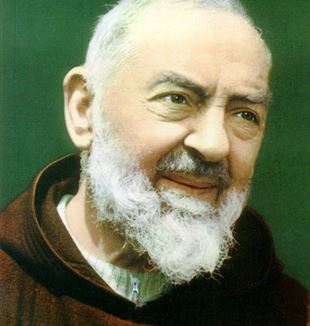 Piazza dei Daini 3, in the brand-new, somewhat futuristic residential section of Bicocca in Milan, Italy. Dr Landi was waiting for me at the front door of the apartment building. “Did you see the Teatro degli Arcimboldi there at the end of the street? It’s completely new. Just like us. My wife and I have lived here only a short time just since I left my place as chief consultant in Foggia and Santina left hers as pediatrician. We wanted to be close to our children. Puccio is married with two children, Federica has an apartment next-door to ours, and Maria Teresa… is in America because of work, but her heart is here in Milan.” Listening to a flood of words flavored with a marked Rimini accent, in those few minutes I glimpsed a serenity of life, which I then saw reflected on the face of Santina, waiting for us on the threshold of the apartment. We sat down on the couches and started to chat. And here, immediately, as they told their story, as they affectionately yielded the floor to each other, as they looked for books, as they tenderly turned the pages of their wedding album, as they went about their daily gestures completely unperturbed by my presence, I intuited that what animates them and makes them live is not a generic serenity coming from the wisdom of years, but a happiness of heart, a happiness that comes from afar, in both time and space (and has kept them united in all these years), but today is even more vivid. The point in time: the 1960s; the point in space: the hospital called “Casa Sollievo della Sofferenza” (“House of Relief from Suffering”) in San Giovanni Rotondo. It is the Christian happiness encountered concretely in the person of Padre Pio, with whom they spent the most important part of their life. There’s nothing you can do about it, the Christian event changes and transfigures everything it touches, even the ordinary everyday.

The landlady
“In 1956,” Edgardo said, “I had specialized in gynecology and was assistant in the obstetrics clinic in Bologna, when a colleague proposed to me to go work in San Giovanni Rotondo, where he was about to become chief consultant. I didn’t know much about Padre Pio. In fact, the little I did know I got from our landlady in Rimini, my home town, who whenever she had to solve a problem would come out with something like, ‘I’ll ask Padre Pio.’ To tell the truth, sometimes this really got on my nerves. However, it seemed like a good job opportunity. After all, I had nothing to lose. Now I thank God that I said yes. Those were wonderful years, really wonderful. From a professional point of view, the Casa Sollievo gave me every kind of equipment I might need. The workload was heavy: in essence we were on-call 24 hours a day; there were two of us in my ward and it was a chance to learn a lot. In a few years, I became assistant and then consultant.” Yes, but Padre Pio? Did he come into the hospital? “Hold on, hold on. No, Padre Pio always stayed in the convent to pray and to hear confessions. We doctors all met with him once a day. He wanted to know everything and we would tell him, and would ask for special prayers for this or that patient. He always listened attentively and was always very gentle in his relationships. I remember he would ask me how many babies had been born that week. It was our hour of serenity and peace which resonated throughout the whole day, in our daily work.” After pausing a moment, he smiled and added, “But, Santina, now it’s better if you talk.”

High school diploma
Their eyes met, I would say lovingly, and once again I wondered at seeing a harmony built up patiently over time, something that brings them together and is not “just of this world,” and reverberates that fundamental encounter. “My encounter with Padre Pio happened a long time ago. I had received my high school diploma in my town, Torremaggiore, in the province of Foggia,” recounted Santina, who like her husband has kept her accent–Apulian in her case. “I had told my parents I wanted to enroll in medical school in Rome. This was not something taken for granted for a woman of those times. My mother, who was very devout, had a special devotion to Padre Pio and would often go to see him and tell him about her problems, her doubts. In this instance, she told me I should go ask the Padre for advice. At the time, I rebelled–I didn’t understand the reasons, it seemed to me out of place, and this was my decision. I considered the Padre to be a pious man, who gave advice and aid to simple people, but I, I had a classical high school diploma; it seemed too simplistic to me to make such an important decision only after listening to him… My mother would hear none of this and made an appointment for me. Twenty days later I was at San Giovanni Rotondo. I was in the lobby of the pension where I was staying, reciting the Rosary with some other people, when suddenly we smelled a very strong perfume of flowers which could not be defined. It was an experience that shook me to the core. I did not understand; I was flabbergasted. The next day I was in line for confession, because this was the way you went to talk with Padre Pio; my heart was beating very fast, something that had never happened to me before. As soon as I kneeled down, he began listing my sins to me. I stayed silent and at the end asked him advice about what course of study to take. I remember his words perfectly well: ‘Not only must you do it, but you will do very well.’ When I graduated, I spent the summer at San Giovanni to get some experience ‘in the field.’ But my intention was to seek a university career. My parents agreed, even if this meant they would have to support me for many years. I thought maybe Padre Pio had been mistaken; I would never be a physician… Instead, on October 17th of that same year, my father died, and I had to give up my dreams of academics. I accepted the proposal to do my specialization in pediatrics by working at the Casa Sollievo.” An instant’s pause, and then that same statement, “They were wonderful years. In my ward, too, we were always on call. The patients arrived from all over Italy. I would meet the Padre in the confessional, because this is what was allowed to women, or at 5 am during the celebration of Mass. When we decided to get married, we told the Padre, who wanted to celebrate the wedding. You see?”

Wedding album
Santina’s voice broke as she turned the pages of their wedding album and her hand caressed the picture of Padre Pio. What happened, did you leave? “Yes, in 1962. Life forces you to make choices,” Edgardo went on. “At the Casa Sollievo we had learned a great deal in human terms, especially in the relationships with patients, who as Padre Pio told us over and over had “to have the greatest amount of comfort, because the experience of pain must be compensated by love for the suffering human being,” and we also learned a lot professionally. Every month university professors would come to give free consultations. Many of them were not practicing Catholics, and some were not even believers at all. They would always meet Padre Pio and each time they were touched by the encounter. They would return home changed. Like Professor Salvioni, remember, Santina?”

“Certainly. Precisely because of his encounter with Padre Pio, he allowed me to do my specialization in pediatrics by staying at San Giovanni Rotondo and going to Bologna only for exams. At any rate, the only obstacle was that, even though it operated in agreement with the public health service, working at Casa Sollievo did not permit us to accumulate career credits. Thus, when the opportunity came up to compete for a position as division head at San Severo, Edgardo decided to try. He won the post, and this is why we left San Giovanni Rotondo. But that experience had already left its mark on our hearts. We knew that, wherever we went, it would bear fruit. We went back numerous times, for the baptism of our first child, for Padre Pio’s funeral, and every time we felt the need. Padre Pio has never abandoned us. We gave a great deal, but over time he has rewarded us greatly. Three fine children, a good job…” And too, I found myself thinking, they were given that serenity of heart which is written all over their faces–that tangible, concrete unity.

While they walked me to the door, we stopped in the kitchen where there is a little picture of Padre Pio. “Every day I talk to him, I ask him for advice. I always find a moment in the day to read his writings or other books about him. He is a companion on our journey. After today, I hope that he will be also for you.” Thank you, he already is, through you.