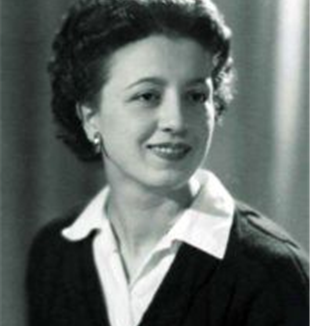 She briskly entered the room filled with the light of this early June day and sat on the edge of the couch, picking up the copy of Traces lying there: “A nice cover! Is this your magazine?” “Yes.” Her eyes ran quickly over Corrado and his wife, Pia. She smiled and said, “He was Benedetta’s favorite. I would fuss at him because he would waste time writing poetry and she would defend him, saying that I didn’t understand. She was right.” “Our Benedetta was patient, she had a patient love for people…” For just an instant, Benedetta’s mother’s voice broke and tears welled up in her eyes. Just who was Benedetta Bianchi Porro, who died at the age of 27 after a long illness which in the last six months of her life left her blind, deaf, semi-paralyzed, and immobile in bed, and for whom a cause of beatification is now in course? Her mother Elsa immediately regained control and continued in a firm and ringing voice, her accent betraying her origins in the Romagna region of Italy. “Benedetta… Benedetta was a beautiful girl, very intelligent–if her illness had not held her back, she would have received her medical degree at the age of 23–serene, cheerful, with an astonishing capacity to gather people together around her. Up to the last. Her room was always full of friends and of religious who came to see her. It was a constant stream, because she had something to communicate: a concrete faith, lived in that situation of suffering. I saw so many come out of her room with tears in their eyes because of what she had said to them. But she was very reserved about this; she didn’t want to be praised. She would often say to me, ‘Mama, I have no special merit. The Lord has given me gifts. All we can do is thank Him.’ One fact may explain this better. It was Easter; her last Easter: There had been a lively discussion at the table, and even though she was deaf she had realized this. When I put her to bed, she asked me why the table had been so animated. ‘We were talking about you. We were saying that you are a saint. This is why you accept everything.’ And she shot right back, ‘Stop talking like this. If you say it and it isn’t true, you are hypocrites. If it is true, stop talking and try to imitate me.’ The next day I told a friar about this, commenting, ‘Benedetta is also proud!’ ‘This is not pride. Mark her words, because it is the saying of a saint.’ I have marked them in my heart.”

Sign language
A room full of people. But how was it possible to communicate with her, if she was blind and deaf? “We were her pen,” Corrado explained. “In the beginning, when she was only deaf, we used sign language. Then, when she also went blind, she would put her hand on ours to ‘read’ the letters of the alphabet. In this way there was a continual dialogue. Carmen, another sister, was very fast. Benedetta made us touch the paradox of the Cross. What salvation can be given by an illness that makes you gradually lose the possibility to communicate? And instead it was different. The worse her illness grew, the more the room filled up with people. Benedetta accepted this cross as a gift for herself and for us.” Elsa could hold back no longer, “My husband did not understand why so many people came to see her. ‘The Lord has taken everything away from her. Why on earth do they come?’ And I would answer, ‘Don’t you wonder why?’ ‘Yes, and I don’t have an answer. An artist who performs, who writes, who dances, gathers people around her. But she is not even beautiful any more!’ ‘It is the Holy Spirit speaking in her!’ He lowered his eyes and said, ‘Maybe you’re right.’ He, who considered this daughter the apple of his eye, calling her ‘a unique brain.’ He, who understood that life was a serious matter when Benedetta became so sick, changed his own life. Every morning he would go into her room and smoke a cigarette without saying anything; he never wanted to learn sign language. There was a period when things were very tense between us. Benedetta, when she found out why, told me she wanted to talk with her dad. He shilly-shallied for days until I confronted him: ‘Look, if Benedetta dies without your having talked to her, you will always have this remorse.’ The next morning he came into her room and she, taking his hands, said, ‘Daddy, your big hands that work for us.’ ‘Yes, I work but I am glad to do it for you all.’ He went out weeping. I was in a corner. And I burst out, ‘You have been wanting to talk to him for a whole month, and now that you do, you say: have a good day at work. I don’t know what to say.’ ‘Neither do I, Mama.’ ‘Then that makes two of us!’ ‘No, Mama, I don’t know what to say because I am very surprised at you.’ ‘At me? I am at you, Benedetta.’ ‘Mama, when you pray, “forgive us our trespasses…” you don’t know what you are saying. Do you really think that rebukes do a lot of good? When a person makes a mistake, make him feel even more that you love him. Maybe in that way he’ll be ashamed.’ I was struck dumb. She spoke without words. And she saw what we didn’t see. Her sensitivity had become more acute with her illness. I remember one time I told her that Manuela, another sister, was crying over nothing. She corrected me, saying,‘When someone cries, it is never over nothing. She is suffering. Even if it is because of something stupid, she is suffering.’ She stopped my awful tongue.”

Fear
What about fear? “In a letter,” Corrado put in, “recalling the Gospel passage of the storm on the lake, she wrote, ‘You should not be afraid to say, “I’m afraid.” Only in this way will God be able to bring good even out of evil.’” Elsa jumped to her feet: “It’s late. I have to go. Will you give me this copy of your magazine? Good. Shall we travel together?” Certainly. On the train from Como back to Milan, she told me about herself, her youth, her children, and one word was a constant refrain: Benedetta. Rather, not a word, a presence. Benedetta was there. We said goodbye to each other at the Cadorna station. She took my hands and kissed me, just as though we had always known each other. I suddenly said to her, “Pray to Benedetta also for me.” “Certainly. But you do it too.” Right, Benedetta has now become a presence for me as well. This is what happens with saints: they invade your life and won’t let you go.